Please ensure Javascript is enabled for purposes of website accessibility
Log In Help Join The Motley Fool
Free Article Join Over 1 Million Premium Members And Get More In-Depth Stock Guidance and Research
By Alex Carchidi – Aug 18, 2021 at 7:39AM

Since he's the most famous and perhaps most successful investor of all time, Warren Buffett's stock-picking philosophy is something that every investor should understand. If you want to become wealthy, applying his ideas to your own investment candidates is a great place to start.

Cannabis company Tilray (TLRY -1.61%) doesn't have the consistent financial performance or operational efficiency that's typical of a Buffett pick. But given that it's the largest cannabis cultivator in Canada by revenue, it must be doing something right. Could that be enough to pique Buffett's curiosity? 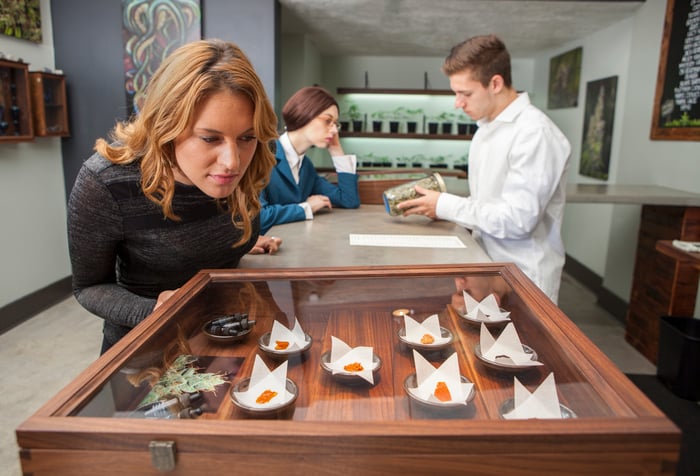 Could cannabis sell as reliably as chewing gum?

Buffett tends to like companies that have simple and evergreen business models.

In particular, Buffett is known for buying companies like the chewing gum maker Wrigley's, which can keep making a cheap and in-demand product indefinitely and without much change. For him, minimal pressure to alter products is a good thing because it means development expenses can stay low. And if consumers don't expect the main product to change over time, it reduces some of the intensity of competition between companies in the space.

Tilray loosely fits this bill, though it hasn't yet been able to deliver the consistent revenue and earnings growth that tend to accompany a value investing favorite.

As with other consumer packaged goods, there's a high chance that Tilray's cannabis products will keep customers coming back again and again. While preferences may shift from one brand to another, fundamentally the demand for marijuana isn't going anywhere, and it might actually keep growing for quite some time. Regular buyers are unlikely to reduce their consumption. And even if a company invents new ways of consuming cannabis or new products, it's hard to imagine business drying up for the existing competitors.

Cost efficiency and no moat might be sticking points

All of the above are green flags for Tilray being a Warren Buffett stock.

But the company still probably wouldn't be very attractive to him. Not just any competitor in the cannabis industry will be capable of making a brand with enduring appeal. Short of customer loyalty forged by high-value brands over time, there isn't much in the way of economic moats that might help Tilray protect its market share. And Buffett loves moats more than anything, as they're a key competitive advantage. Right now it's hard to say that any of Tilray's brands are powerful enough to attract Buffett. That could change with prudent investment in the company's marketing and product-market fit, however.

Aside from the lack of a moat, high expenses are one more strike against Tilray being a Warren Buffett stock. Buffett is a stickler for keeping expenses low as a percentage of revenue. The smaller a company's costs, the easier it is to make profits and then divert those profits to driving future growth.

In this department, Tilray doesn't have too much to offer. While it reported a quarterly profit in Q2, distinguishing it from many of its unprofitable competitors, the company's profit margin is highly inconsistent and rarely positive. Its cost of goods sold (COGS) stood at more than 94% of quarterly income, which is quite high. In contrast, its selling, general, and administrative (SG&A) expenses clocked in at 12.49% of quarterly revenue, which is a significantly lower proportion of income than in the past. Moving forward, management hopes to use low-cost cultivation centers in Portugal to sell cannabis to markets in the EU, thereby avoiding tariffs and enabling economies of scale. 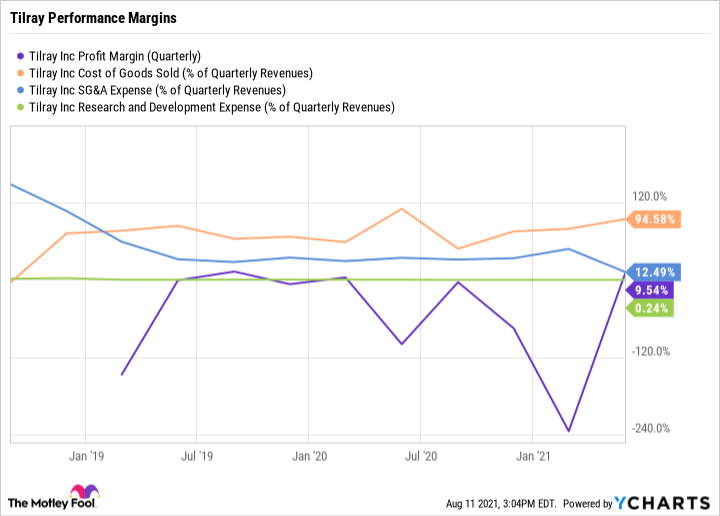 Still, without a clear trend of actual progress in reducing the cost of cultivating Tilray's cannabis, it's hard to see how the Oracle of Omaha could be pleased. Likewise, while its research and development (R&D) expenses are a mere 0.24% of its quarterly revenue, that isn't much of an accomplishment. Beyond making new cannabis products like vaporizers which can command higher selling prices, there's a finite amount of room for innovation, and it's hard to imagine R&D spending being a major competitive differentiator.

Don't expect a Buffett purchase in 2021

Finally, Buffett tends to appreciate companies that invest in themselves rather than whiling away their profits on shareholder-oriented things like dividends. On that note, Tilray doesn't rate favorably, as it doesn't have a history of retaining earnings to expand its business, probably because it usually operates at a loss. Of course, lacking consistent profitability is yet another deal-breaker for Buffett. Still, there's nothing inherent to its business model preventing the company from becoming profitable and hanging on to some of the value it produces in the future.

In closing, Tilray as it stands today doesn't really have any of the things Warren Buffett looks for in a stock. But if it can deliver on its promises of low-cost cultivation and make customers loyal to its brands, it could potentially become a Buffett pick over the next few years.

Tilray Brands Is Partnering With Another U.S. Cannabis Company
349%