Moody's is a buy, and not just for its dividend.

In the early stages of the pandemic last year, when the market dropped about 33% in the span of a month, many financial sector companies were forced to cut back or suspend their dividends because of the dire financial conditions. That certainly caused a lot of companies, especially banks, to wipe the slate clean and end their streaks of consecutive years with a dividend increase.

But some companies were hurt less by the recession and managed to maintain or increase their quarterly dividends, including Moody's (MCO -1.42%). The credit rating agency now has 12 straight years of annual dividend increases and is going strong. It's about halfway to Dividend Aristocrat status, which comes with at least 25 straight years of dividend increases. It's a pretty good bet to get there -- and it's a good buy whether it does or not. 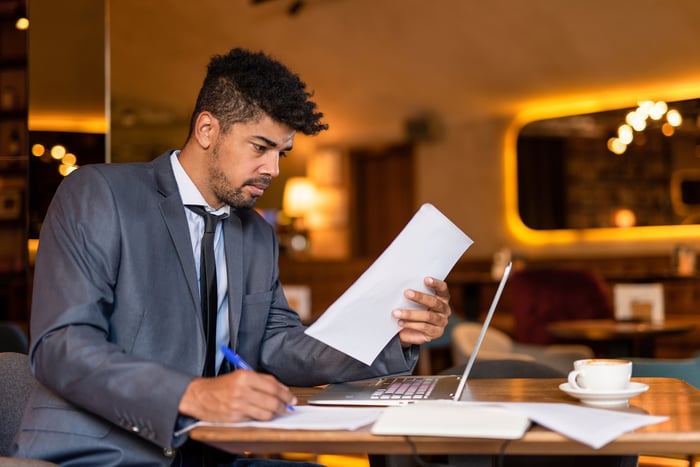 Moody's has returned 28% annually over the past 10 years

Moody's is one of the two largest credit rating agencies in the U.S., tied with S&P Global at roughly 40% of the market each. The third-largest agency, Fitch Ratings, is a distant third with 15% of the market. The three combined essentially are the market, which gives Moody's a huge competitive advantage and a moat that offers great protection from competitors. This is not an industry that is easily entered into; there are sizable regulatory hurdles, and only a few players are needed so as not to water down the standard.

With such a competitive edge, Moody's has been a consistent earnings machine over the years. Over the 10-year period ending June 30, revenue increased about 9% per year while earnings have gone up roughly 15% annually. The stock price has posted a 28% annual increase over that same 10-year period. This year, the stock is up 29% through Wednesday's close, right in step with its historical average.

While revenue will fluctuate depending on the amount of debt issuance, as the trend lines show, even in an average or down year for debt issuance, Moody's still generates consistent revenue because of its competitive edge.

But in recent years it has gotten reliable revenue from a second source, its analytics business, which provides economic research, risk assessment, and consulting services for institutional clients. Since 2015, analytics revenue has more than doubled from $286 million to its current $573 million -- which is about 37% of total revenue. Moody's has made several acquisitions over the past year to enhance the analytics business. Most recently, it acquired RMS, a firm that provides climate and natural disaster risk solutions.

With relatively little overhead and such stable, steady revenue from its fee- and subscriber-based products, Moody's is ridiculously efficient, with a return on equity of 115% and an operating margin of 48%. It also has about $1.2 billion in free cash flow. That not only allows it to invest in acquisitions, enhancements, share repurchases -- and its dividend.

In July, Moody's declared a $0.62 per share dividend for the third quarter. It has gone up every year since 2010, and this year it's on pace to have an annual per share payout of $2.48.

The yield is a little low at 0.65%. That's half the S&P 500's average dividend yield of 1.3% and below the yield Moody's has historically paid over the past 10 years, around 1% to 1.5%, but that's due to the fact that the stock price has performed so well. Also, Moody's has a low payout ratio of about 20.9%, which means that a little more than one-fifth of its earnings are paid out to investors. Thus, given its earnings power, it may boost the payout in the coming years.

Bottom line, Moody's is a really consistent dividend stock, but you get the added benefit of having a solid overall stock that will likely produce great returns over time -- as it has for the past decade.

Is This Top Warren Buffett Dividend Stock a Buy Now?