A big rise was a sweet deal for investors a day after the stock fell following its earnings report. 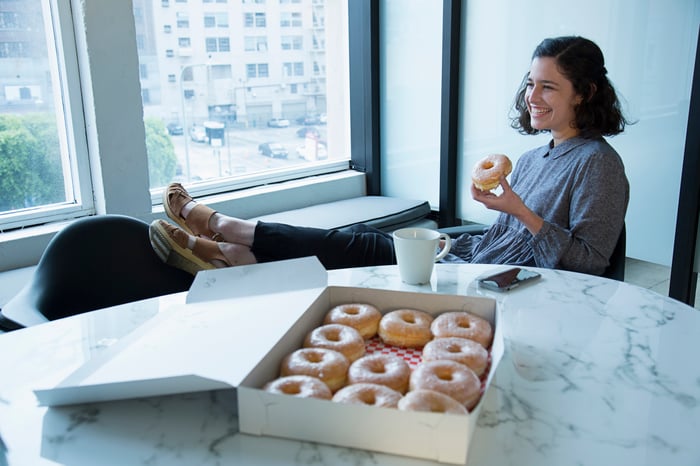 It appears the stock is becoming a meme favorite. After all, who doesn't love donuts?

That's as good an explanation as any why the stock jumped a day after it fell from $14.56 to $14.04 following its second-quarter earnings report, which was announced after the market close on Tuesday. Another possible explanation for the rise was that investors realized the numbers were not that bad and the market simply overreacted on a day where everything else seemed to go south.

It was the company's first earnings report since going public. It reported revenue of $349.2 million, up 43% year over year and above analysts' predictions of $333.4 million. Earnings per share were $0.13, a little lower than analysts' estimates of $0.14, but still an improvement of 30% over the same period in 2020.

The company reported a loss of $15 million, which it attributed to the costs of it going public during the quarter. Krispy Kreme also announced that it was raising prices, which should boost its adjusted earnings before interest, taxes, depreciation, and amortization (EBITDA) margin above the 15% it reported in the second quarter.

There's no way to sugar coat this. Don't be surprised if the stock falls a bit on Friday as investors take profits.

In the long run, however, there's no reason the stock can't continue to gradually climb. It's become more of an international company, adding business in Great Britain, Ireland, Australia, New Zealand, and Mexico in recent years. It's also focusing on increasing margin.

The pandemic forced the company to adapt and, as a result, it has strengthened its e-commerce trade. CEO Michael Tattersfield said that in the first half of the year, 19% of the company's business was from e-commerce.