The ammunition manufacturer beat expectations and the stock market is happy -- but should it be?

Editor's note: This article has been corrected. The quarterly report Ammo released on Aug. 16, 2021, was for the first quarter of the company's fiscal year 2022.

Ammunition manufacturer Ammo (POWW) made something of a bang on Monday, Aug. 16, with quarterly earnings that beat Wall Street expectations on both the top and bottom lines. After a brief dip, the company's share price shot higher, rising more than 6% by midday on the Wednesday after the report.

Investors appear pleased with the bullet maker's gains, but should they be upbeat given the current charged political climate surrounding firearms? Let's take a closer look and consider three major points about Ammo's situation. At least one take on the situation sounds a note of caution, but the bull case for Ammo looks strong overall. 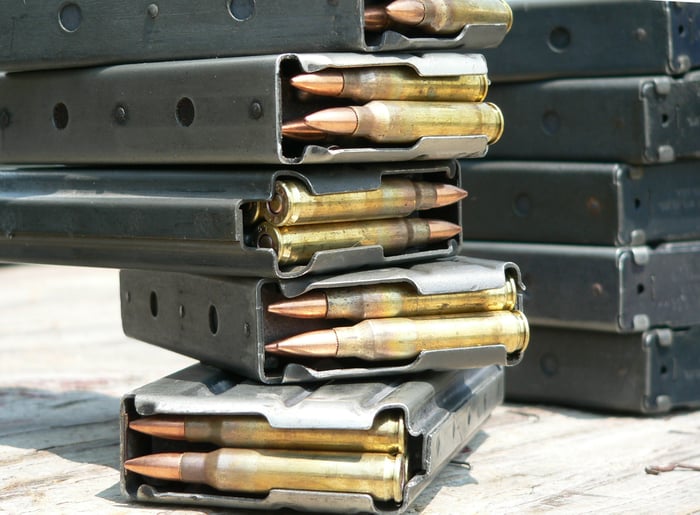 Marksmanship is a perishable skill, as anyone interested in shooting for hunting, self-defense, serious competition, military or police service, or just "plinking" fun knows, so a steady supply of bullets is needed to maintain it. When ammunition began to sell out across most outlets during 2020 and prices skyrocketed, the situation offered an opportunity to relative newcomer manufacturers in the industry to profit by helping address the shortage.

Ammo seized the initiative and is selling plenty of product. Its quarterly revenue exploded 360% year over year to $44.5 million, of which $28 million came from ammunition sales. The company also has a backlog of $238 million in ammunition orders from "distributors" and "big box stores," according to CEO Fred Wagenhals. Gross margin rose from 11.1% to 42.7%, showing the profitability of addressing the ammunition shortage. The company's adjusted earnings per share (EPS) rose from $0.01 net loss per share to $0.13 EPS.

Nothing succeeds like success, and Ammo's gains give it the ammunition, as it were, to continue expanding production. Wagenhals claimed during the earnings conference call that "demand trends in the US domestic market and international ammunition markets remain extremely strong and show no signs of slowing." This claim is supported by research from outdoor sports, hunting, and shooting market researcher Southwick Associates, which suggests that the conditions leading to the ammunition shortage are still in place and that demand will remain strong for the foreseeable future.

2. It's also profiting from other facets of the business

Ammo is obtaining revenue not only from direct ammunition sales but also from other facets of the ammunition and firearms market. One significant addition was the acquisition of online firearms auction website GunBroker.com, which features listings for used, new, and antique firearms as well as ammunition, parts kits, optics, accessories, and other items of interest to gun owners. Approximately a quarter of net revenue, $12.3 million, came from GunBroker, which charges listing fees and additional fees based on the final value of successful auctions.

GunBroker is one of the most significant firearm auction sites for ordinary gun owners. With prices still elevated from last year's firearm and ammunition shortage, its fees are a good source of income for Ammo. However, CEO Wagenhals expects even more from the new acquisition in the future. He stated during the earnings conference call that over "the next 12 months we expect to leverage this dominant marketplace's performance to significantly broadened our growth and increase margin." Ammo itself, according to Wagenhals, plans to sell its ammunition and other items through GunBroker alongside existing commercial and private sellers, aiming for $25 million in sales in 2021.

A smaller but still significant addition to net revenue comes from what Ammo refers to as "casing sales," which amounted to nearly $3.9 million. This describes the sale of newly manufactured brass casings to other manufacturers, most notably Federal Premium Ammunition, an ammunition-manufacturing subsidiary of recreation company Vista Outdoor (VSTO 0.43%).

Selling brass to other companies enables Ammo to gain from their ammunition sales, too, without the additional cost of adding powder, projectiles, primers, and sealants involved in making a complete round. In short, the company is profiting not only from direct ammunition sales but also indirectly from the sales of other manufacturers, giving it another revenue stream.

3. Its preferred stock issues raise an eyebrow but might have a good reason

Free of long-term loans and with nearly $51 million in liquidity remaining after its April purchase of GunBroker.com, Ammo has been raising money with the issue of preferred stock rather than borrowing. To pay for its expansion of production facilities and other expenses, it issued 1.4 million shares of 7.25% preferred stock at $25 per share, paying quarterly dividends. The prospectus notes holders of these shares "will have no voting rights except for limited voting rights if dividends payable on the outstanding Series A Preferred Stock are in arrears for six or more consecutive or non-consecutive quarterly dividend periods."

Ammo provides no explanation for why it chose to issue preferred stock rather than borrow from a credit facility. The action just substituted dividend payments for loan payments. However, at least two purely speculative reasons might be:

In either case, Ammo's current situation looks quite bullish. It is operating in a market with sustained growth and demand, has made significant revenue and earnings gains, is expanding its production facilities to meet its strong order backlog, and has made a significant, accretive acquisition in GunBroker. It appears to be a company with plenty of growth potential and is well worth looking into for investors in consumer discretionary stocks.