Please ensure Javascript is enabled for purposes of website accessibility
Log In Help Join The Motley Fool
Free Article Join Over 1 Million Premium Members And Get More In-Depth Stock Guidance and Research
By Jason Hawthorne – Aug 21, 2021 at 7:20AM

They likely to do the worst if Michael Burry is right.

If you haven't heard of Michael Burry, you might know of him. He became famous for his big bets against the housing market, as well as being portrayed by Christian Bale in the movie The Big Short. He recently revealed an interesting position. Through options, he is betting on Cathie Wood's flagship ARK Innovation ETF (NYSEMKT: ARKK) to drop. 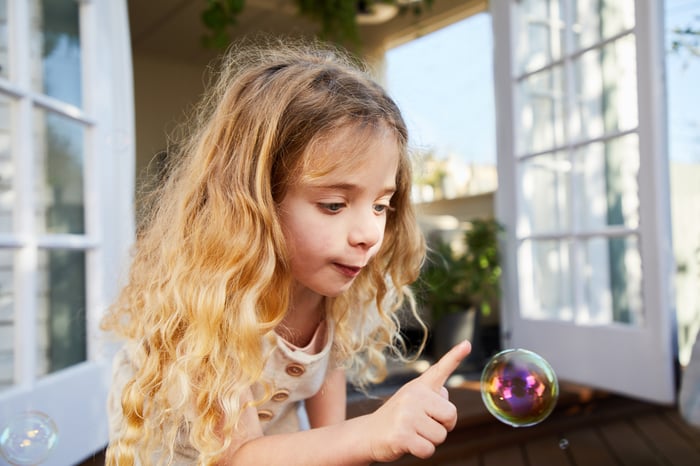 Tesla is up more than 1,000% in the last three years. That's despite revenue only increasing 138%.

There's no doubt that the company has quieted most of the doubters from its early days. It even surpassed 200,000 vehicles delivered in the most recent quarter -- which was a first.  It sounds like a lot, but context is important. The company still only claims 1.5% market share in the U.S. and about 1% in Europe and China.

Despite being a smaller player in terms of market share, Tesla is the sixth largest company on the U.S. stock market. The disparity is reflected in each company's price-to-sales (P/S) ratio. 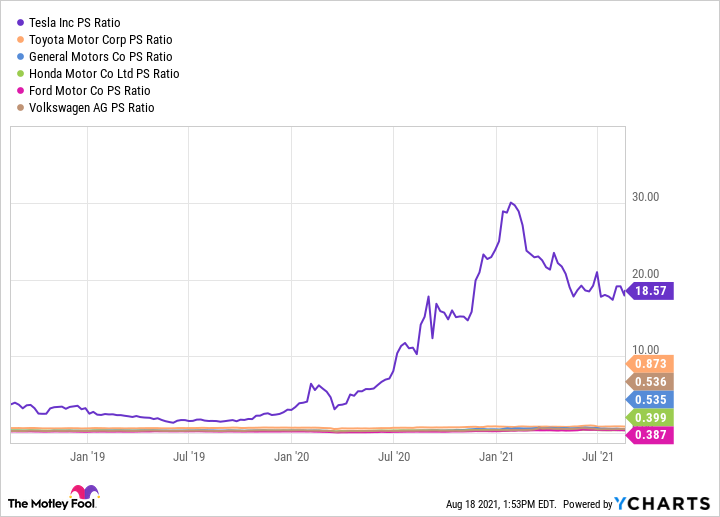 Add it up and it means a lot of the value is assigned to the company's potential. It could one day fulfill the hype. But if things turn sour in the market -- even temporarily -- the hopeful projections built into the stock price may get dialed back fast.

The stock is inextricably tied to Wood's ETF -- it is the top holding at 10% of the fund. With so much of its value pinned on the future and many shareholders sitting on enormous gains, don't be surprised if Tesla's stock gets hit especially hard alongside the ARK Innovation ETF.

Another stock that may experience a deep drawdown is Coinbase. Although the company has benefited from a sharp rise in cryptocurrency trading over the past year, it's hard to imagine the trend continuing.

A global pandemic gave rise to the spike in trading activity, and that's not something investors should expect to repeat. The company's second-quarter release paints a clear picture of the boom.

Surprisingly, institutions were more responsible for the spike in activity than retail traders. As for what was being traded, crypto assets other than Bitcoin were the focus. The rise since the second quarter of last year largely coincides with the $850 billion in economic stimulus American consumers received from three different government packages.

That sugar high might be responsible for the crypto marketplace's valuation. It's trading at a richer premium than most of its peers. 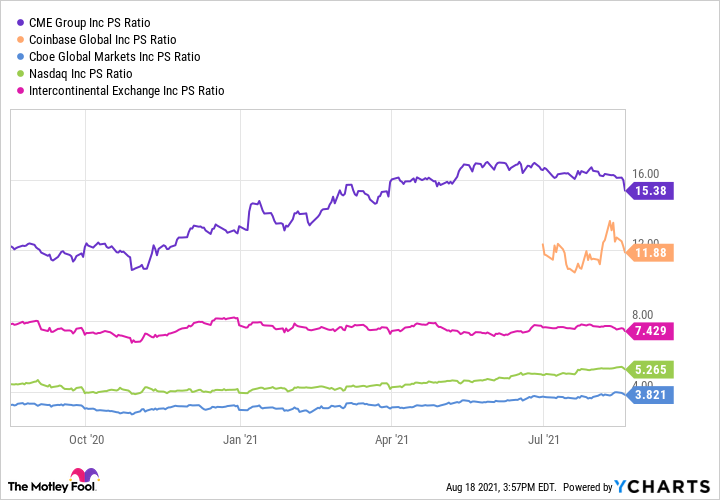 Interestingly, CME Group is the only exchange that appears more expensive. It specializes in derivatives -- options like the ones Burry is using to bet against Cathie Wood. They can be used to hedge against risk but are viewed as risky financial instruments. Many use them to gamble on the short-term direction of an asset. Amidst the flurry of trading overall, CME Group's revenue was down year over year in the latest quarter. Perhaps the pseudo-gambling in the financial markets has moved to crypto.

As America gets back to work and the stimulus spending winds down, it wouldn't be surprising to see the interest and activity in cryptocurrency also wane. That would leave Coinbase vulnerable to a valuation more in line with peers -- that is, unless there's a fourth stimulus package.

Beam therapeutics is taking the next step in gene editing. The CRISPR-Cas9 method was made famous through books, TED Talks, and ultimately, a Nobel Prize in Chemistry. It's been described as a pair of genetic scissors, allowing scientists to locate and cut our DNA.

Beam is taking it one step further by acting as an eraser and pencil. Through a chemical reaction, the company has developed a technique called base editing that allows the correction, modification, activation, and silencing of genes. By changing the base pairs -- A to G, C to T, and vice versa -- Beam is essentially rewriting DNA.

As you would imagine for an emerging biotechnology company, shares of Beam have been volatile. Just this year, the company has been up as much as 63% and down as much as 21%. 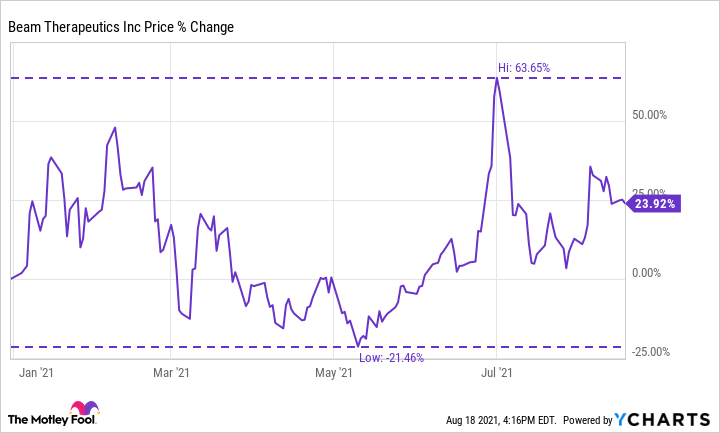 Although it isn't one of the larger holdings of the ARK Innovation ETF, the stock could be especially vulnerable in a sell-off because it has no revenue. In fact, it hasn't even filed an investigational new drug application (IND). That would be a first step before a new drug is tried on humans. Without one, investors are left to wonder if a potential therapy will ever enter clinical trials.

One thing they do know is that any revenue is years away. While I'm excited about the company and believe in its approach -- along with its impressive bench of innovative leaders -- I think its lack of commercial visibility will cause traders to exit the stock in a sell-off.

Jason Hawthorne has no position in any of the stocks mentioned. The Motley Fool owns shares of and recommends Bitcoin, Ethereum, Tesla, and Volkswagen AG. The Motley Fool has a disclosure policy.