Please ensure Javascript is enabled for purposes of website accessibility
Log In Help Join The Motley Fool
Free Article Join Over 1 Million Premium Members And Get More In-Depth Stock Guidance and Research
By Jamie Louko – Aug 24, 2021 at 9:30AM

By combining innovative software with a bland industry, Latch is looking to shake things up.

Apartment management and security may seem like a relatively bland industry -- which is likely why few investors are paying attention to one ambitious company currently shaking up that market. Latch (LTCH -0.88%) sells both software and hardware to help apartment building managers let the right people in and keep the wrong ones out. With outstanding products that create lasting partnerships with large apartment makers, Latch has an immense opportunity to disrupt this giant market over the next 20 years.

Breaking into the industry

Latch allows renters to let in whomever they need, at any time, from anywhere -- even if they're not at home. Need to let in your dog walker while you're at work? Latch's mobile app can make it happen. Latch also integrates with smart home utilities, so renters can adjust lights, thermostats, and any other smart home devices from their phones, even if those gadgets come from different brands. 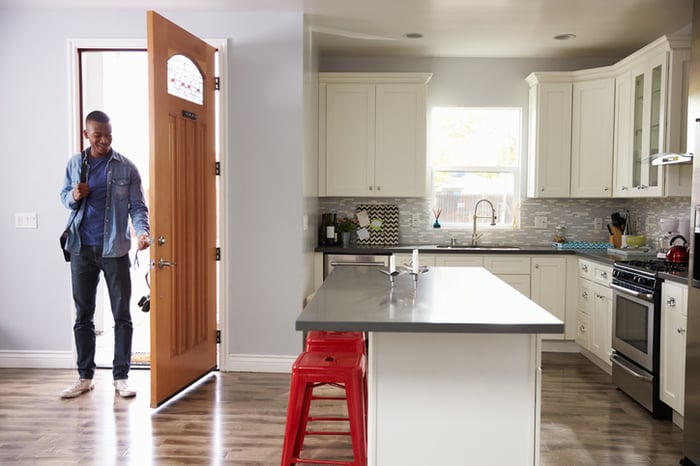 With Latch, landlords can give and restrict access to specific tenants at any time, and they can also see when tenants enter or exit their apartments. If landlords see a tenant's access code used to enter their building at midnight while that tenant's on vacation, they can quickly act on this potential red flag.

These convenient features likely explain why Latch has not lost a single customer since 2017. It could also explain Latch's dollar-based net revenue retention rate of 154%, which means that every customer Latch had last year is now spending an average of 54% more with Latch today.

Latch has amassed an impressive customer list of large apartment builders and real estate companies like Tishman Speyer, Brookfield, and Avalon Bay, whose scale has allowed Latch's revenue and bookings figures to blow the doors off of quarterly estimates. In its most recent quarter, total bookings grew to $95.8 million, growing a whopping 102%, and total revenue grew 227% to $9 million.

Bookings represent the amount of money that Latch's customers have promised to pay, roughly within the next 2 years. When a large apartment complex is getting built, the locks and the software for those locks are likely the last things to get added -- yet Latch receives these promises to use Latch from apartment builders before they start construction. Latch records bookings made when it signs a contract with builders -- but it only books that revenue after the apartments are fully constructed. As long as those buildings actually get built, Latch's bookings could result in revenue equal to more than 10 times this quarter.

Latch is being integrated into new apartments at a fast rate. In its most recent quarter, Latch's cumulative booked home units were up 108% to over 451,000. While its current market penetration is low, it's quickly on its way to being (literally) a household name. For the full year, Latch is expecting booking growth of 97%-105% -- showing no signs of stopping its tremendous growth.

Just beginning to open the door

Latch's current market opportunity is massive, and it can grow even larger as time goes on. Currently, it has a total addressable market of $54 billion that can keep growing as the company pursues opportunities such as international markets or commercial offices. It also has the opportunity to expand the services in its LatchOS offering, as it recently did by rolling out Delivery Management, which allows tenants to safely secure their packages until they arrive home.

Despite all of this growth, Latch is still a very young company, and while it has its foot in the door of this incredible market opportunity, there is a lot of competition in this industry. While no other business offers the vast, quality spectrum of offerings that Latch does, Amazon's Ring Doorbell is a primary competitor. Other smart home device providers could see Latch's success, however, and decide to enter this industry and push Latch out of the market.

And while Latch provides security and safety for tenants, it may do so at the expense of their privacy. Tenants may not be comfortable with their landlords getting lots of information about their personal lives -- including when they come home and when they leave. Latch does promise, at least, to only collect this information about common areas such as front doors, never tenants' individual units. And it lets tenants see when a landlord or a member of their building's staff has been in their apartment while they were away.

Latch is also losing lots of money on the locks it sells -- at present, its only hardware product, and its primary loss leader. However, Latch's software subscription fees from selling LatchOS software have gross margins of 90%. Latch believes that the subscription fees will end up overrunning the poor margins of its locks as its customers continue paying the monthly fee, which will position the business better in the future. Up until the fourth quarter of 2021, Latch's entire business was gross margin-negative, but it expects this to trend toward positive gross margins as it continues to retain customers.

For Latch to succeed as a business, it will have to continue growing and succeeding by expanding its relationships with customers and landing spots in new apartment complexes. Its products have allowed Latch to get its foot in the door, and continued additions and improvements could make its wares even more appealing to customers. As it grows revenue, bookings, and margins, Latch has the potential to unlock this vast market and make itself at home there.

What Went Wrong With Latch Stock?
351%