These healthcare stocks have their warts, but the price is right for long-term investors.

If you've ever bought a cheap gadget of questionable durability because the price was too good to pass up, you know that bargains come in all shapes and sizes. Sometimes, buying undervalued stocks can be a good decision. Old-school value investors like Benjamin Graham were often willing to buy stocks in companies that many perceived to be of dubious quality as long as they saw some potential and they were priced appropriately.

While it's typically hard to find bargains in the biopharma sector, they do exist. Both of the companies I'll discuss today are profitable, they have several products on the market to supply steady revenue -- and they might be undervalued.

But to figure out whether they are worth buying, you'll need to understand their valuation as well as their chances of breaking out from their current doldrums. So let's dive in. 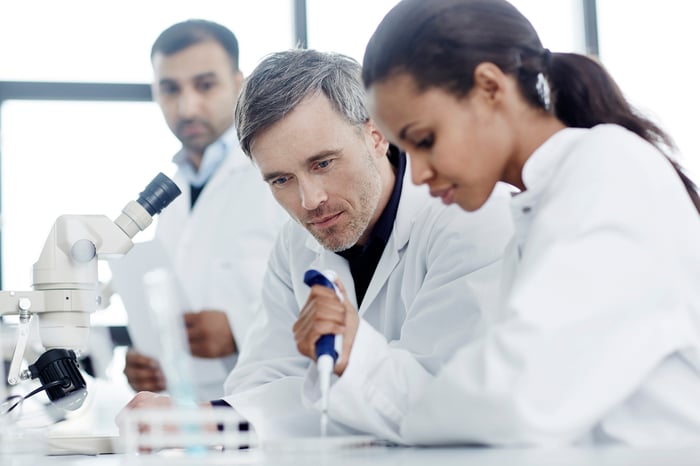 Antares Pharma (ATRS) sells a small handful of drugs for arthritis, migraine, and testosterone therapy. Many of its products are administered via the company's proprietary auto-injector devices, which it also deploys to sell certain generic drugs with the help of its commercial partners. Per the second-quarter report, things are going swimmingly: Quarterly revenue increased by 38.9% and quarterly earnings grew by 103.2% compared to the same period in 2020.

So why is this stock's trailing price-to-earnings ratio lingering around 12 when the pharma industry's average is around 56? Why aren't investors stumbling over themselves to buy shares?

It probably has something to do with how Antares has very few wholly owned projects in its development pipeline. Of the projects it's pursuing without collaborators taking the lead, only its hydrocortisone therapy is currently in clinical trials. Given that hydrocortisone is a cheap and ubiquitous generic drug, it's hard to see how Antares could keep growing its revenue by putting it into an auto-injector format.

Still, the company has survived so far by combining sparse in-house development with sales generated from outside partnerships and licensing. Management plans to keep pushing forward with this mixed strategy. But investors won't have any clue about new partnerships or pipeline projects until Antares announces them, and right now there isn't much on the board.

In sum, this could easily be a great value stock to own, assuming you're comfortable with investing in a pharma business whose prospects depend mostly on the future deals that management makes.

Meridian Bioscience (VIVO -0.19%) makes a handful of diagnostic tests for everything from bacterial infections to parasites, viral illnesses, and even lead poisoning. Its P/E ratio is a scant 12, suggesting that the market is somewhat pessimistic about Meridian's future growth. Part of the reason may be that its earnings and revenue have both been contracting. Compared to a year ago, net revenue dropped by 25% and net earnings crashed 60%, as of the latest quarter ended June 30.

For growth prospects, Meridian's product pipeline is a bit thin. The only diagnostic it currently has in clinical testing is for detecting a bacteria called C. difficile, which causes an inflammation of the colon, but development is currently stalled, perhaps until next year. While it could have a COVID-19 diagnostic test approved by regulators by year-end, it's hard to imagine the company grabbing a significant share of a crowded market that's populated by a fair number of giant competitors.

Based on the likelihood of its future slow growth, how could this stock be a buy? It boils down to valuation. When paired with its low P/E ratio, the stock looks like a bargain. People who buy it now could see their shares appreciate in value if it reverts toward the market's average. And if its coronavirus test ends up generating significant revenue, the company could reverse its fortunes throughout 2022.