This leading gym operator is warming back up.

Shares of Planet Fitness (PLNT -0.50%) are up 14.1% through the market close on Thursday. Earlier this month, the company reported that it had regained approximately 75% of the members it had lost from the peak in Q1 2020 to the low in Q4 2020. It's seeing uncharacteristically high membership momentum as the economy reopens.

Two investment firms weighed in recently with a bullish view on the direction of the business and therefore the stock price. Morgan Stanley initiated coverage of Planet Fitness with an overweight rating and a $93 price target, while Roth Capital upgraded the stock to a buy from neutral with a $100 price target. Both targets are higher than the closing price on Thursday of $80. 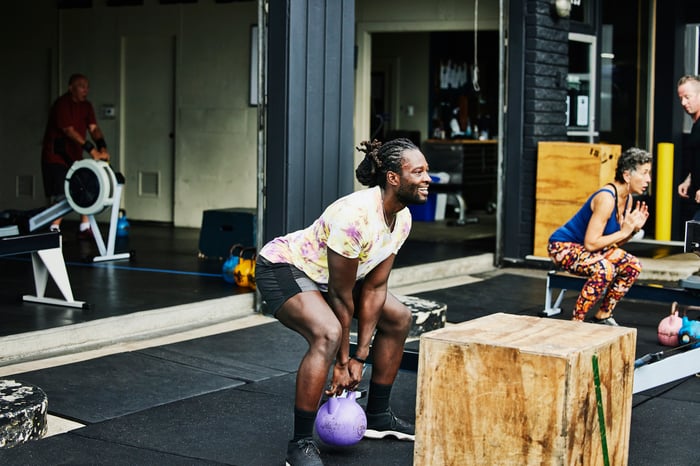 The reopening is a big catalyst for gyms but a headwind for at-home options like Peloton Interactive. Peloton saw a boom in sales during the pandemic, but the company expects lower growth in fiscal 2022 after lowering the price of its flagship connected fitness product.

Meanwhile, Planet Fitness is seeing accelerating growth. Revenue jumped 241% year over year in the second quarter, compared to 12% in Q1 2021 and a decline of 78% in Q2 2020. With a tailwind at its back, management is calling for full-year revenue to come in between $530 million and $540 million, representing year-over-year growth of 31%.

The stock has returned 3.5% year to date but has increased 8.1% since the second-quarter earnings report. 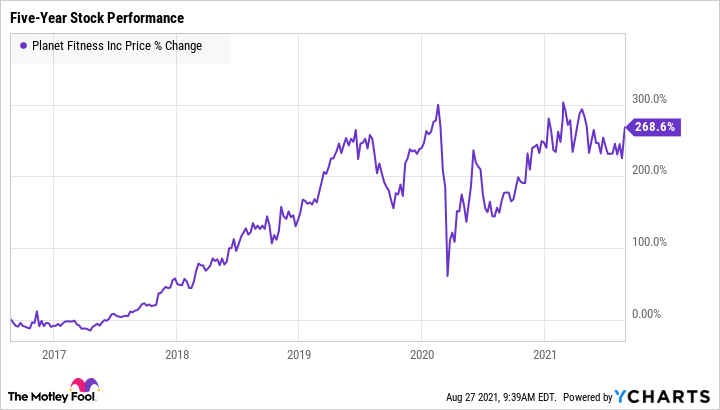 Planet Fitness is poised to gain significant market share in the near term, although that success stems from unfortunate circumstances. Sadly, it's estimated that 22% of U.S. gyms were permanently closed during the pandemic, which means a lot of business owners lost their livelihood. At the same time, many people have realized the need for fitness and emotional well-being during the crisis, which puts Planet Fitness in a great position to meet that need.

The company opened 24 new stores in the second quarter, bringing the total store footprint to 2,170. Management still sees the potential for 4,000 locations across the U.S. That could lead to significant long-term upside for this promising mid-cap stock.

Why Planet Fitness Stock Got a Lift Today

Move Over, Peloton: 16.5 Million Reasons to Buy This Fitness Stock Instead
376%