Their products are never going out of style, and their valuations are attractive.

If you're normally a fiend for growth stocks, the idea of buying shares in a slow-and-steady company probably isn't very appealing. Still, sometimes a few shares of boring but reliable value stocks are exactly what your portfolio needs to be well-rounded and protected from calamity.

Both companies I'll discuss today have reasonable valuations, and more importantly, they make products that the healthcare system can't do without. While there's no guarantee that either of the two will consistently outperform the market, investors could still benefit by considering them as highly defensive picks for the conservative segment of their portfolios. 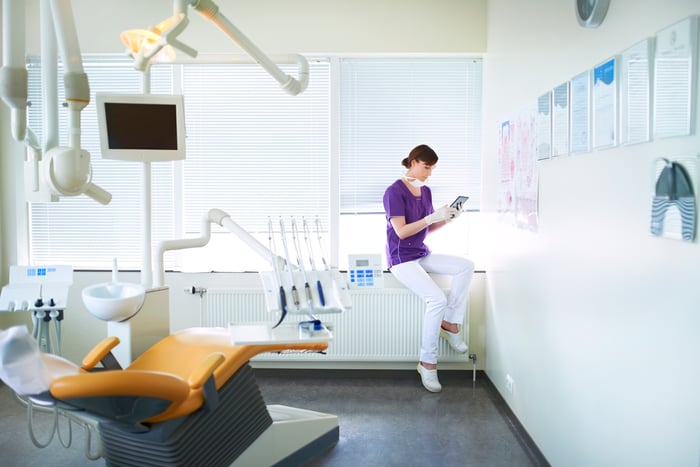 If you were recently vaccinated against the coronavirus, Retractable Technologies (RVP -3.32%) might have helped. The company's retractable needles and syringes are perfect for mass vaccination campaigns thanks to their ergonomic design, which also has improved safety features to protect caregivers from injury. Before the pandemic, Retractable made exactly the same set of products, and that's one of the reasons why it isn't going anywhere.

In the current environment, it's easy to understand why this value stock's revenue is exploding. At the moment, the company is practically printing money. In the second quarter, domestic sales grew by 226% year over year, powered by the U.S. government's purchasing activity. That powered a sharp rise in diluted earnings per share (EPS) from $0.11 in Q2 of 2020 to $0.31 in the same quarter this year.

Importantly, the U.S. government is planning on doing business with Retractable at a larger scale in the future than it is doing today. In fact, it wants to do so much business with the company that it's paying more than $27 million to fund the creation of more manufacturing capacity. And that's on top of the $53.6 million it already paid last year for the same purpose.

When it comes to having satisfied customers, it's pretty much the Holy Grail when your largest buyer is willing to pay you to build up your capacity to sell them even more of your product as quickly as you can make it. It's true that there might not ever be another gold rush for needles like there is right now. On the other hand, every functioning healthcare system on the planet will need them in large quantities for the foreseeable future, just like they did before the pandemic. And, the company will get to use the assets invested by the government to serve that future demand rather than using its own, which could support stronger cash flows for quite some time.

Part of what makes this company a value stock is that Retractable's valuation is quite appealing, too. Its trailing price-to-earnings (P/E) ratio stands at about 8, which is far lower than the medical supply industry's average P/E of 59.43. Likewise, its price-to-sales (P/S) ratio is a mere 2.71, whereas its industry's average sits at 6.83.

Much like Retractable Technologies, Dentsply Sirona (XRAY 0.76%) is an invisible value stock, this one making dental tools and related hardware. As long as people need to go to the dentist, dentists will need to buy the kind of dental imaging systems and tooth implant tech this company provides. So, its business is extremely reliable, even if its revenue might not grow very quickly. That's not exactly the stuff that makes for a powerhouse growth stock, but it does fit the bill for a conservative and long-term investment.

At the moment, this stock's valuation is cheaper than its peers, perhaps as a result of difficulties with posting consistent revenue growth over the last few years and a disastrous second quarter of 2020. Its trailing P/E ratio is near 36, and its trailing P/S multiple is 3.24, both of which are firmly below the medical supply industry's averages. Furthermore, its price-to-book (P/B) ratio of 2.58 in the most recent quarter is well beneath the industry's average of 5.6.

Over the last decade, Dentsply's quarterly free cash flow has grown by 161%. Because its cash flow is so steady, the company can afford to pay a dividend to increase its returns for shareholders. Last quarter, Dentsply increased its dividend payout by 10% while also committing to repurchase more of its shares.

There's a good chance that more dividend growth is on the way. In the previous 10 years, it has raised its dividend by a whopping 120%, though sometimes years passed without an increase.

Investors can also look forward to management's new growth initiatives to invest in research and development and increasing capital expenditures. Furthermore, Dentsply has been on an acquisition spree in 2021, dropping more than $241 million on purchases of small dental supply and dental hardware companies. With new holdings in hand and new spending ongoing, the company's future is bright -- but it still might take an upset for its total shareholder return to beat the market over the next year, so invest accordingly.