UnitedHealth Group, Ryman Healthcare, and Dentsply Sirona all had double-digit revenue increases recently. Are any of them worth buying?

There are plenty of reasons why companies may make a big dividend increase of 10% or more. Better yields help attract investors, and if a company has increased cash flows, it can afford to boost its dividend. Sometimes, however, when a company puts forth a big dividend increase, it could mean it is acknowledging that it expects growth and expansion to slow. If the company doesn't need money for expansion, why not put it in shareholders' pockets? That may be the thinking.

UnitedHealth Group (UNH -0.90%), Ryman Healthcare (RYHT.Y -5.57%), and Dentsplay Sirona (XRAY 0.35%) all have had recent dividend increases of 10% or more. That certainly may make them more attractive to investors, but looking past those dividends, are these stocks on the upside? 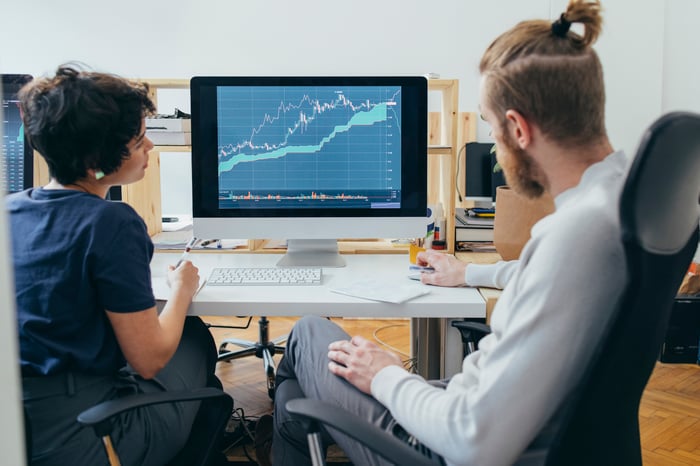 Ryman Healthcare just raised its semiannual dividend by 51%, from $0.331 to $0.4733 per share. That sounds great until you crunch the numbers and realize it's only because the dividend was so low before the raise. Even with the increase, that works out only to a yield of 2.71%.

So, don't buy Ryman purely for the dividend. But it does appear to be a well-priced stock with plenty of upside. The New Zealand-based company owns and operates retirement villages and senior care facilities in its home country and Australia. The company's reported revenue last year was $452.4 million NZD, up 7.2% year over year. However, the company's reported underlying profit last year of $224.4 million NZD was down 7% year over year.

The company cited coronavirus-related expenses and disruptions for the drop. However, unlike in the U.S., there were no reported positive cases of COVID-19 at any of the company's 41 retirement villages with 12,500 residents and 6,100 employees. That means that there seems to be little to check a potential rebound this year.

The company's stock is down more than 20% this year, a reaction to its disappointing yearly numbers. However, the company's strength is obvious, with a 97% occupancy rate. Its forward price-to-earnings (P/E) ratio of 15.25 is well below the 44.61 industry average. The company's dividend raise is still covered at a 50% payout ratio, so the stock appears to be a good long-term buy at its current price.

Dentsply Sirona raised its dividend in May by 10% -- from $0.10 to $0.11 per quarterly share. The yield at that dividend, though, is 0.70% -- nothing to brag about. It is the world's largest dental products and technologies company, and its stock has enjoyed a good rise so far this year, climbing more than 19% based in large part on a strong first quarter.

The company reported Q1 revenue of $1.027 million, up 17.5% year over year, with earnings per share of $0.53 compared to a loss of $0.63 per share in the same period last year. Dentsply Sirona just made a big move that should help its bottom line in the future: Last month, the company paid $113 million in cash to buy the assets of Propel Orthodontics, including that company's VPro device and Fastrack Mobile app.

This strengthens Dentsply's position in the growing clear-aligner market. According to a Market Research report, the compound annual growth rate for the clear-aligners market is expected to grow 15.9% from $2.4 million in 2020 to $8.7 million by 2028.

Dental procedures such as orthodontics and implants were put off last year because of coronavirus restrictions and concerns. Consequently, there's likely pent-up demand this year. Management said in the first-quarter earnings call that orders appear to be ramping up. For that reason, the company restated its earnings estimates for the rest of the year, saying it expects full-year revenue to be between $4.1 billion to $4.3 billion, up 23% to 28%. The non-generally accepted accounting principles (GAAP) earnings-per-share outlook was raised to $2.75 to $2.90 per share, compared to the previous estimate of $2.60 to $2.80.

UnitedHealth Group, a big company with a big increase

UnitedHealth Group just boosted its quarterly dividend by 16% to $1.45 per share, giving it a yield of 1.45%. The company's stock is up more than 16% this year as well. Health insurers such as UnitedHealth Group fared surprisingly well last year during the pandemic in part because fewer people went to the doctor.

Now that vaccinations have lowered COVID-19 infection rates in the U.S., UnitedHealth Group continues to grow. The company operates two segments: UnitedHealth Group healthcare benefits and Optum, its health-services business. In Q1, the company reported revenues of $70.2 billion, a rise of 9% year over year, led by Optum's $36.4 billion in revenue, an increase of 10.8% over the same period in 2020. The company increased its full-year outlook to $18.10 to $18.60 earnings per share, up from its original estimates of $17.15 to $17.65 per share.

The company's free cash flow has increased more than 77% over the past five years. So, despite the dividend increase, it is well covered with a payout ratio of 28%. 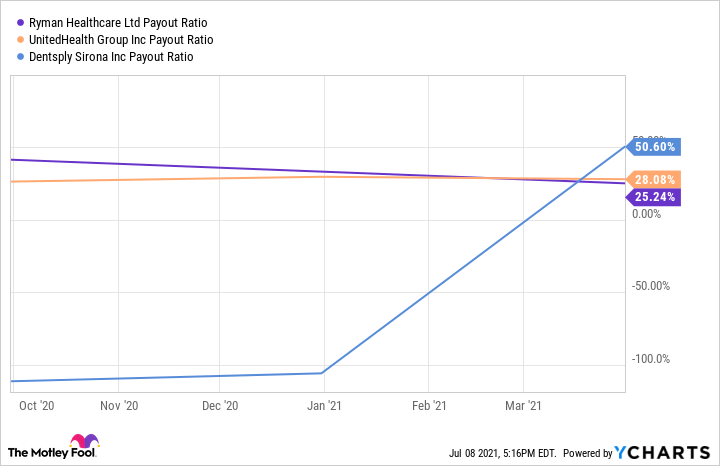 All three companies present solid reasons to buy without even factoring in their improved dividends. Of the three, I prefer UnitedHealth Group because of its stability and track record of free cash flow growth. While the yield on its dividend is lower than Ryman's, it's a stronger stock with a greater diversity of income streams.

Ryman, probably the most underpriced of the group, presents a good buying opportunity with a low P/E ratio and a dividend that is well supported. But it needs to show it can boost profits this year before I would get interested.

Dentsply may have the most growth potential of the three, but its payout ratio of 50%, while certainly supportable, means that its dividend doesn't have as much room to grow as the other two companies.