The company is more than an online gaming platform.

Shares of Roblox (RBLX -0.23%) have climbed 40% since it went public through a direct listing in March. The company has a growing platform of 46 million daily active users that connect with each other in virtual 3D worlds (the metaverse) and engage in various activities such as games, educational experiences, and virtual concerts.

Its valuation looks expensive with the shares currently trading for 30 times sales. That is much higher than top social media and video game stocks that sell for 10 times sales or less, but Roblox is growing very quickly. Revenue was up 127% year over year in the second quarter, and that was on top of a 68% increase in the year-ago period.

However, growth in daily active users slowed to 8% in July as the company laps the acceleration that occurred during the second half of 2020. So how much upside does the stock offer long-term investors? 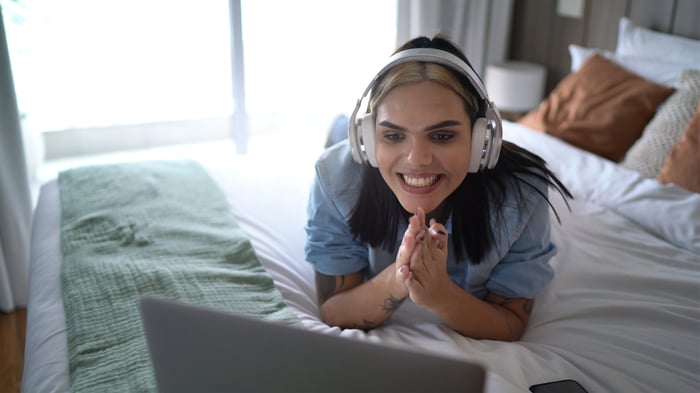 Roblox has been around for 17 years, but what's most encouraging about its growth so far is the fact the platform has primarily served a narrow demographic of users under the age of 13. Roblox has spent the last few years "aging up" to expand its market potential, and it's making progress. Developers are creating more mature content, and this has resulted in users over 13 years old growing faster than users under 13.

In the second quarter, the business reached an important milestone in this effort. Roblox reported that users over 13 accounted for more than half (50.3%) of total engagement on the platform for the first time.

Growing its older cohort is what Roblox must do if it's going to accomplish management's long-term vision of reaching one billion users. The fastest-growing age group among older users is 17 to 24. As Roblox expands its user base, it opens the door for new monetization opportunities that can significantly increase the value of the platform.

One of these opportunities is virtual concerts where Roblox has proven it has an engaged audience that wants to connect with artists. Roblox reported that over 36 million people watched a live virtual concert with Lil Nas X. In addition, the launch party for Zara Larsson broke records with over four million visits.

Roblox is continuing to form relationships with the big music companies. In August, it announced a strategic partnership with BMG to host a launch party for hip-hop artist KSI. And in July, Roblox signed a deal with Sony Music Entertainment to bring more of its artists to the platform.

The music industry is expected to grow at a 12% annual rate through 2025 with live concerts fueling much of the expansion, according to PricewaterhouseCooper's Global Entertainment and Media Outlook report. Virtual concerts should grow right alongside it. Virtual events give artists much more exposure than what even a 50,000-seating-capacity arena could ever provide. Plus, Roblox offers the opportunity for virtual merchandise sales, mini-games, and other interactive activities, which is beneficial to both Roblox and the artist.

Most importantly, the older demographic that watches some of these concerts has a higher propensity to spend money on the platform. Given that Roblox has gotten to where it is with the support of younger users, there is tremendous upside as it expands further with non-gaming activities.

Keep in mind concerts are just one tool Roblox has at its disposal to attract older demographics. Ultimately, the long-term goal is to create a social platform that is rooted in friendships where users want to come every day to have fun. Some of that can be accomplished with games, but management sees a lot of untapped potential in turning Roblox into more of a "utility" platform for social interaction, and recent comments by Facebook CEO Mark Zuckerberg suggest Roblox is not off the mark on that idea.

Zuckerberg recently said people will see Facebook as "a metaverse company" one day. On top of that, the leading graphics chip producer Nvidia is investing in new software tools such as Nvidia Omniverse to help graphics artists make content for metaverse platforms.

Investment by big tech confirms that the metaverse-specialist Roblox is onto something big. For this reason, Roblox could grow much more than investors realize. It just might be like buying Facebook soon after its IPO in 2012.

Randi Zuckerberg, a former director of market development and spokeswoman for Facebook and sister to its CEO, Mark Zuckerberg, is a member of The Motley Fool's board of directors. John Ballard has no position in any of the stocks mentioned. The Motley Fool owns shares of and recommends Facebook, Nvidia, and Roblox Corporation. The Motley Fool has a disclosure policy.