Complications abound, but they're not all bad.

Would you want to invest in a relatively new business that's charging forward into a highly contested, highly regulated market -- one that's already dense with entrenched competitors? If you're the sort of investor who immediately answers "Yes!", you're in the right place.

Born from a recent merger with a special purpose acquisition company (SPAC), Clover Health (CLOV 2.26%) aims to disrupt the market for Medicare Advantage plans by slashing the costs of healthcare and offering a better value for patients. Even if healthcare insurers aren't common in your portfolio, this stock might be worth a look. But there are quite a few moving parts with Clover, so it's important to understand some things about the company that smart investors know. 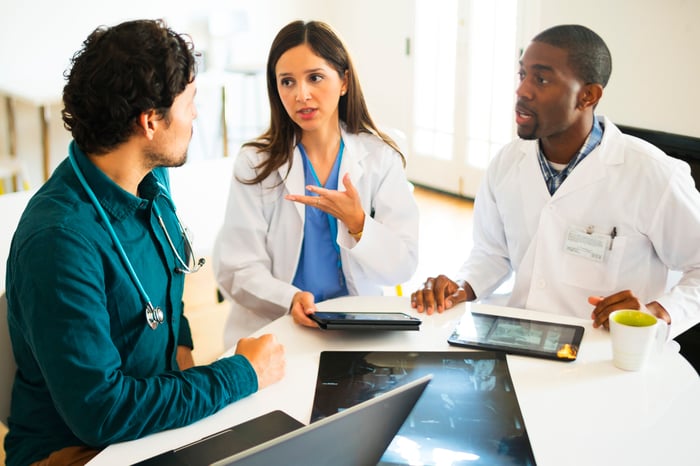 Regardless of its long-term merits, Clover Health is a stock that's popular on retail trader hubs like Reddit. That means the stock can frequently be volatile, seemingly without explanation. It also means that management will have access to an enthusiastic audience of evangelists, which might come in handy.

But don't assume that being a meme stock makes Clover Health a bad stock. If anything, this dedicated community watching from the bleachers might end up holding the stock when other investors would dump it, like after a bad earnings report.

Plus, memes are free publicity. While that won't necessarily make too much of a difference in the bottom line today, it could be an asset in the long run.

If management is especially skilled and ambitious with its retail investor relations, there's also the (as of now, remote) possibility of enlisting retail investors as small-time lobbyists for legislative causes that could benefit the company -- say, changing age requirements for Medicare eligibility. Even if small shareholders might not be interested in writing to their congresspeople on a regular day, if they own shares of Clover, they'd have a financial incentive to do it, and a nudge from management could make all the difference.

2. New legislation could present a major threat -- or an opportunity

Clover Health competes in the highly regulated industry of Medicare Advantage plan administrators. Because Medicare is a public health insurance program provided by the U.S. government, it makes sense that the company's exposure to legislative risk is high. If Congress were to pass a law banning privately run extensions of Medicare benefits, Clover would be finished.

That probably won't happen, but even minute tweaks to the relevant laws could be highly disruptive for shareholders. On the bright side, some of these tweaks have the potential to be overwhelmingly positive. At present, progressive Democrats are arguing that the age for Medicare eligibility should be reduced from 65 to 60 as part of the in-progress infrastructure bill, which would massively increase the size of Clover Health's addressable market.

And, as younger people have fewer health problems, they might be less expensive to provide coverage for, which could help to support higher profit margins.

But if standard publicly provided Medicare plans are mandated to cover some of the services that only Medicare Advantage plans currently cover, it could eat into the company's market share. So the details matter, and every new piece of healthcare legislation could raise issues.

3. The business model may need to change significantly

For Clover Health to succeed, two groups of people need to want to work with it: Medicare patients and clinicians.​​ The patients agree to pay the company monthly premiums in exchange for a larger network and broader coverage of services than what their standard Medicare plan provides, and the clinicians get reimbursed by Clover Health when they actually perform those services. But first, the doctors need to agree to join the network and accept its plans.

Clover's goal is to offer coverage more cheaply than competitors while also reimbursing healthcare staff faster and helping them to cut their costs of providing care. It additionally plans to pay back providers at twice the industry's standard rate. In explaining how it will accomplish this, management invokes the company's Clover Assistant software platform, which it claims uses all sorts of fancy technology to make good on its cost-cutting promises to physicians.

If the Clover Assistant can't deliver when it comes to slashing the cost of providing care, the company will be in serious trouble. It's one thing to be more generous with reimbursements during the initial growth phase, when getting more providers into the network is critical. But over time, it might not be sustainable, especially with less money flowing in from each customer than what might be expected with a competitor.

So the business model may need to shift considerably in the long term, which will probably be a major event for shareholders.