The upside potential appears to be much greater for this vaccine stock.

Moderna (MRNA -1.36%) has hands-down delivered the best stock performance among leading COVID-19 vaccine makers over the last 12 months. The biotech's shares have skyrocketed nearly sixfold during the period.

As much as I admire Moderna's innovation, though, I don't think it will be the biggest winner among vaccine stocks over the next year. Instead, my view is that Novavax (NVAX -4.71%) could emerge from the pack to trounce it, and there are three reasons why. 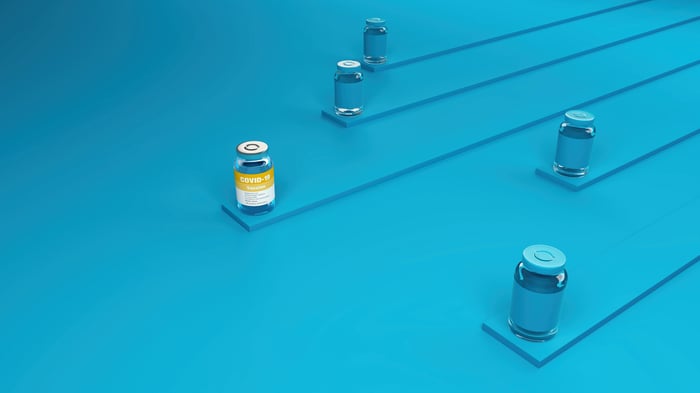 The most compelling reason why Novavax should outperform Moderna is that it has bigger upcoming catalysts.

Novavax's partner, Serum Institute of India (SII), has already filed for Emergency Use Authorization for the biotech's COVID-19 vaccine candidate, NVX-CoV2373, in India, Indonesia, and the Philippines. Regulatory wins in any of these markets could provide a boost to Novavax's share price.

Although Novavax won't file for EUAs in other markets as quickly as it hoped, it expects to complete its EUA filing for NVX-CoV2373 in the U.K. by the end of next month. Submissions in other countries, including Australia, Canada, and New Zealand will follow in the subsequent weeks.

Novavax plans to submit for an EUA in the U.S. in the fourth quarter. It's possible that the company could carve out a lucrative spot in the booster vaccine market in 2022 and beyond.

What about Moderna's catalysts? The company should win full approval for its COVID-19 vaccine from the U.S. Food and Drug Administration soon. It could secure EUAs for its vaccine to be given to kids under 12. Moderna could also pick up additional supply deals. However, these factors probably won't move the needle for its stock as much as Novavax's catalysts could for that company.

There's a simple explanation as to why catalysts for Novavax are likely to provide a bigger spark to its stock than catalysts for Moderna will. Novavax has a much more attractive valuation.

Thanks to its impressive run since last year, Moderna now sports a market cap of over $160 billion. Wall Street doesn't think the biotech is worth that much. One analyst even predicts that Moderna's shares could fall by close to 70%.

Meanwhile, Novavax's market cap of around $17 billion isn't nearly as jaw-dropping. Sure, the stock looks expensive in one sense, because the company doesn't have any products on the market yet. However, the consensus 2022 revenue target for Novavax is nearly $5.5 billion. A valuation that's a little over 3 times expected sales isn't worrisome.

I also think that Novavax has more wild cards that could come into play over the next 12 months than Moderna does. And although wild cards aren't always good, they can be.

In early 2020, Novavax reported positive results from a late-stage study of its flu vaccine candidate, NanoFlu. The company's COVID-19 efforts pushed NanoFlu out of the limelight, but the flu vaccine remains an important part of Novavax's value proposition. Positive results from clinical studies evaluating a combination COVID-19/flu vaccine featuring NVX-CoV2373 and NanoFlu could light a fire under the biotech stock.

The company is likely to use the cash brought in by NVX-Cov2373 (assuming it is given EUAs) to advance additional programs into clinical testing. It's also possible that Novavax could license or acquire external pipeline candidates.

There's one other scenario that's less likely, but isn't too farfetched: Novavax could be acquired.

Wall Street analysts are already more bullish about Novavax than they are about any other leading vaccine stock. If one or two of its wild cards fall the right way, this stock could be a bigger winner than analysts project.