A C-note will allow you to pick up shares of all three of these great stocks.

One big misconception about investing is that you need to have a lot of money to get started. The reality is that you don't. Sure, there are some stocks that are priced too high for many new investors. However, there are also lots of alternatives if you don't have a big upfront amount of cash.

It's important to understand that low share prices don't necessarily mean that a stock is attractively valued. Some stocks that trade for more than $1,000 are better picks than others available for less than $10.

But you can have it both ways -- a low share price combined with strong growth prospects. If you've got $100, here are three smart growth stocks to buy right now. 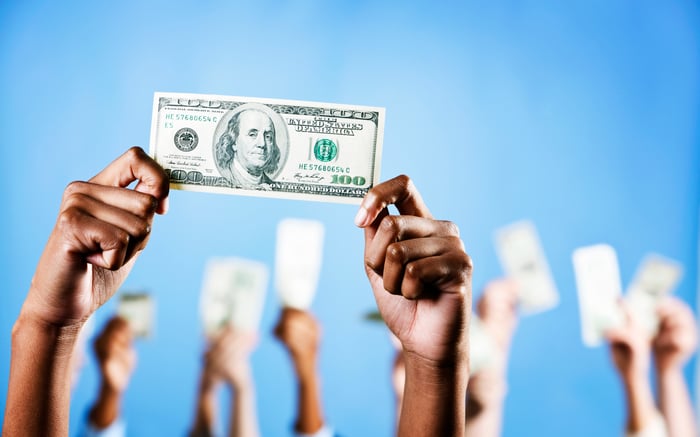 You'll need less than $45 to scoop up a share of Brookfield Renewable (BEP 0.68%) (BEPC 3.99%). There are two stocks with the same underlying business -- one a limited partnership and the other with a corporate structure. Whichever one you go with, you'll get a lot of bang for the buck with these renewable energy stocks.

While there's no such thing as a sure thing, renewable energy is pretty close to being one. Countries around the world, including the U.S., have committed to drastically reducing carbon emissions. Renewable energy is an increasingly cost-effective way to achieve those objectives.

Brookfield Renewable stands as a leader in the renewable energy space. The company currently operates hydroelectric, solar, and wind facilities with a capacity of 20,000 megawatts. Its development pipeline could add another 31,000 megawatts to that total.

With strong tailwinds, Brookfield Renewable seems to be in a good position to deliver on its goal of average annual total returns of around 15%. Those returns include the company's steadily growing dividend distributions.

Buying a share of DermTech (DMTK -4.85%) will eat up another $36 and change of your initial $100. The stock is significantly riskier than Brookfield Renewable, but it could be a massive winner over the long run.

The current standard approach for diagnosing melanoma, the worst type of skin cancer, leaves much to be desired. Dermatologists must cut an area around a lesion and send off the biopsy for analysis. For every 25 biopsies, only one case of melanoma is actually diagnosed.

With DermTech's approach, an adhesive patch is placed on the lesion. The patch is removed and sent to a lab for genomic testing. The company's skin genomics test is 17 times less likely to miss a diagnosis of melanoma. It's close to 40% cheaper. And there's no cutting required.

DermTech has a total addressable market of around $10 billion by targeting multiple types of skin cancer. Its market cap currently stands at close to $1 billion. The company must convince more dermatologists to use its products and more payers to provide reimbursement to capture a big chunk of this market. Assuming it's successful in those efforts, this stock could triple or more over the next few years.

After buying Brookfield Renewable and DermTech, you'll have around $20 remaining from your initial $100. That's enough to pick up a couple of shares of Cresco Labs (CRLBF 2.45%). Analysts project that Cresco has a huge upside potential of close to 190% over the next 12 months. I think they could be right.

Cresco ranks as one of the top multi-state cannabis operators in the U.S. It's also the largest cannabis wholesaler in the country. Unlike some cannabis companies, Cresco is already consistently profitable.

The company has tremendous growth prospects thanks to the continued expansion of the U.S. cannabis market. Cresco currently operates in six of the top 10 states with the largest populations, notably including California, Florida, and New York.

What especially makes Cresco stand out, in my view, is its valuation. The stock trades at a significantly lower price-to-sales multiple than most marijuana stocks. If federal cannabis reform is enacted in the future (which seems likely), Cresco is poised to be one of the biggest winners.

Is Compass Pathways Stock a Buy?
349%