The console and game retailer is set to report second-quarter earnings on Sep. 8.

GameStop (GME 0.39%) is widely known for its role in the meme stock frenzy. Retail investors who gather on Reddit and other forums to discuss stocks collectively decided the buy and hold GameStop stock.

The concerted decision caused the stock to skyrocket, and it's up an incredible 1,165% in 2021. That's despite the company's deteriorating operating performance over the last several years. It has an opportunity to report improving results when it reports second-quarter earnings on Sep. 8. 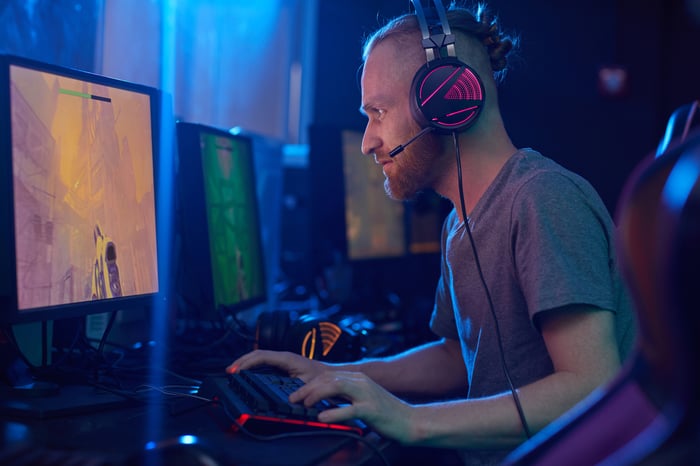 Doing all it can do

Not a big deal -- several companies trade at price-to-earnings ratios as high or even higher. The caveat here is that it was the company's best year in the last decade, and it is unlikely to reach that level again. The gaming industry is increasingly moving toward digital sales, and GameStop largely sells physical copies of games. The trend is unlikely to reverse. Gaming companies can earn higher profit margins by selling digital downloads than from physical copies of games they have to make and ship to customers.

However, it's important to note that a group of high-frequency gamers strongly prefer buying physical copies of games. That's because when they are through playing a game, they can turn around and sell it. In fact, this is where GameStop thrives by buying and selling used games from consumers. This is further supported because game developers are selling digital copies for the same price as physical copies, offering no incentive other than convenience for folks to choose digital.

Management is making the right moves: It's decreasing GameStop's store footprint, raising equity by selling shares at inflated prices, and using the proceeds to pay down high-interest-bearing debt.

And sales are moving in the right direction, albeit off a low base. Revenue increased by 25% to $1.3 billion in the most recent quarter. That's even though the company reduced its store count by 12%. Still, it wasn't enough to break even, and the company reported an operating loss of $41 million in the first quarter.

Analysts on Wall Street expect GameStop to report revenue of $1.12 billion and a loss per share of $0.66 in Q2. Revenue is improving as economies reopen, but there is no telling when the company can generate profits annually.

There is some hope that next-generation consoles will generate enough interest in gaming that the company will benefit. Still, manufacturers have made available digital-only consoles that cannot be used with physical copies of games. As a result, it looks to be long before the company's operating performance can live up to its expensive stock price.