Let's look to rival Pfizer for some clues.

Moderna (MRNA 1.59%) recently completed its submission to U.S. regulators for the full approval of its coronavirus vaccine. If regulators give Moderna the nod, it will join bigger rival Pfizer (PFE 1.29%) in selling a fully approved vaccine. The U.S. Food and Drug Administration approved Pfizer's vaccine last week. Both companies have been selling their vaccines under Emergency Use Authorization (EUA) since December.

As we eagerly await the FDA's decision, we may be asking ourselves the following questions: How long will it take? And how will it affect Moderna shares? Let's look at some clues that may help us come up with answers. 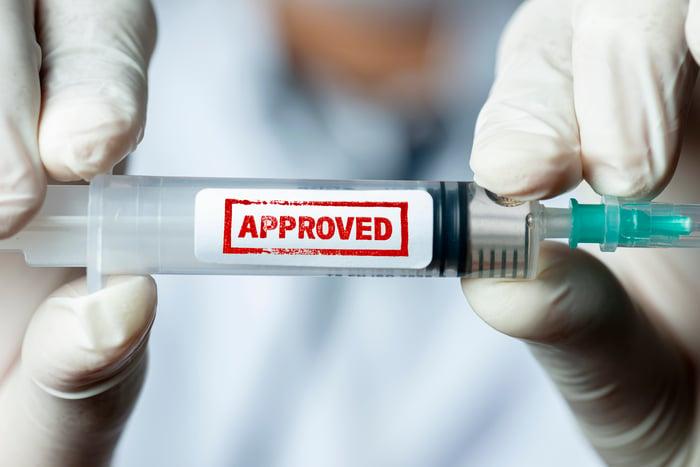 Moderna and Pfizer have advanced in lockstep over the past year. They both began phase 3 trials in July 2020, then won EUAs in December. The companies initiated trials in kids and booster shot studies at about the same time. And their trial reports and regulatory submissions continue to come within weeks of each other.

As mentioned, Moderna wrapped up its regulatory submission this month. The company now is waiting for a decision on its request for priority review. If Moderna's path is similar to Pfizer's, the FDA could grant priority review in October and decide whether to approve the vaccine a month later. (Of course, the process may be shorter or longer depending on the contents of Moderna's submission. But this at least gives us an idea.)

Now, let's move on to talk about what this means for Moderna and the company's shares. First, let's look at revenue possibilities. I've written about how vaccine approval is likely to help Pfizer. The same goes for Moderna. If the FDA approves the vaccine, we should see more demand for it. That's because some individuals may feel more confident about a fully approved product. And approval also could make it easier for some workplaces to require vaccination.

Like Pfizer, however, Moderna won't immediately see a lift to revenue from this increased demand. The U.S. already has ordered enough vaccines to cover the entire population this year. But approval could mean greater revenue ahead. If individuals opt more and more for Moderna vaccines, the government is likely to make bigger orders down the road.

Keeping up with Pfizer

And, importantly, approval will help Moderna keep up with Pfizer. The big pharma company's vaccine rollout began about a week earlier than that of Moderna. And since then, the company has remained ahead. Pfizer has fully vaccinated 93 million Americans. That's compared to 65 million for Moderna. It's fine if Moderna comes in second here. The company predicts $20 billion in product revenue this year, after all. And it reported $2.8 billion in profit in the most recent quarter. That's a big deal for a company that didn't have a product or product revenue only a year ago. But to hold on to its spot as one of the leaders, Moderna can't slip too far behind Pfizer.

So, what about share performance? Moderna has gained a whopping 257% so far this year. The stock soared in the days following its stellar earnings report in August. Since reaching an all-time high on Aug. 9, the shares have come down about 22%. I expect further good news -- such as a regulatory approval -- to push the shares higher again. That said, stock performance and market cap have climbed quickly. 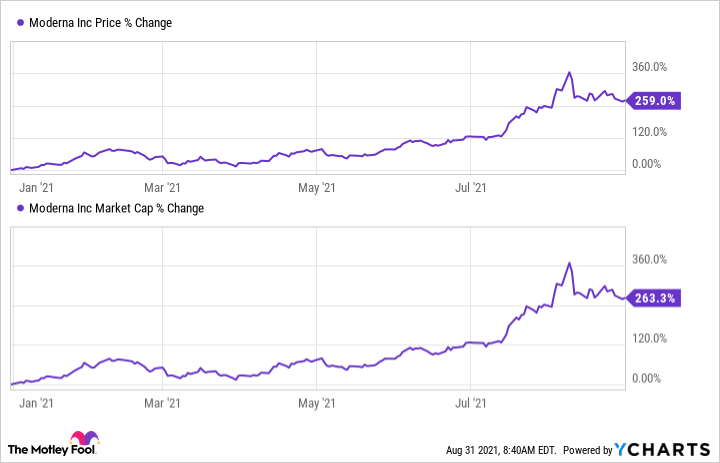 Moderna won't keep up that pace forever. At a certain point, I expect Moderna's gains to slow. But that isn't bad news. The company has several potential long-term drivers of revenue and profit. And that's good news for long-term investors.