Please ensure Javascript is enabled for purposes of website accessibility
Log In Help Join The Motley Fool
Free Article Join Over 1 Million Premium Members And Get More In-Depth Stock Guidance and Research
By Jason Hawthorne – Sep 2, 2021 at 6:50AM

The company is about to shock Wall Street.

A once-a-century pandemic has created a tough task for management teams trying to forecast the future. A wave of COVID-19 can shut down businesses, ramp up online commerce, and generally upend any well-meaning forecast.

That's what has happened with Fulgent Genetics (FLGT 1.10%) over the past year. The company -- and Wall Street -- seem to be aiming at a constantly moving target. But paying attention and crunching some numbers points to an opportunity for investors to get a leg up before the next quarter's results are released. 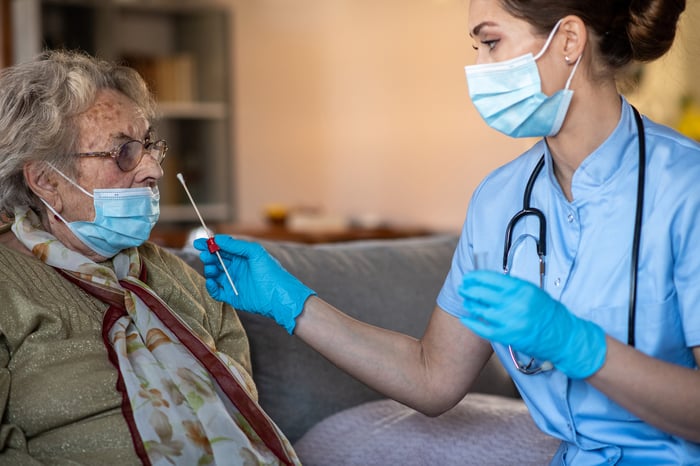 COVID-19 is a moving target

Depending on who you ask, we are now in the fourth or fifth wave of the coronavirus pandemic. The last time cases were this high was the end of January. It's made it hard for management teams to predict business, and Fulgent Genetics has been no exception.

In the past six quarters, the company has updated its guidance six times. Until this past quarter, those changes had been to increase expectations. As COVID-19 cases fell, management had to guide back down.

Currently, the three analysts that cover the stock are expecting revenue of $132 million in the company's third quarter. That's in line with management's guidance of $125 million to $150 million. But the company doesn't have a great track record. And it hasn't always a bad thing. Here are the previous quarters when Fulgent has offered guidance and how it turned out.

Data source: Fulgent Genetics. *annual guidance was given instead.

It's obvious the company was catching up with the reality on the ground for much of the past year. Its tests were in high demand and it trounced its own expectations. Last quarter was different. The company delivered a negative surprise as COVID-19 waned. I believe the company has over-corrected and analysts are once again going to be stunned at the numbers Fulgent puts up.

The core and COVID-19 businesses could flourish

There is no question that the stock price is tied to COVID-19 testing for now. But Fulgent's genetic sequencing business is thriving. It even won a share of the largest contract from the Centers for Disease Control to date. Per the agreement, the company will monitor the prevalence of the SARS-CoV-2 virus and its variants. That's given the company confidence to guide for 200% year-over-year revenue growth in the core business. The estimate is for $110 million for 2021 and $32 million in the third quarter alone.

That would leave between $93 million and $118 million of COVID-19 testing during the upcoming quarter. But based on the historical relationship to case volumes, I think that is an incredibly low bar to clear. To understand why, it helps to see overall U.S. COVID-19 cases and the company's revenue by quarter.

It's not a perfect relationship as timing and geographic differences surely influence how much the company tests. But it's interesting to note how the dollars per 1,000 tests has been increasing. And how consistent it is. That could be indicative of Fulgent taking market share. Regardless, it offers a good range to test whether the revenue estimates for the third quarter hold water. They don't.

So far in just July and August, there have been almost 5.7 million COVID-19 cases in the U.S. That means the company may have already earned between $114 million and $228 million this quarter with September still to go. Even if cases drop off -- a big assumption with most colleges now back in session -- Fulgent is likely to put up somewhere between $200 million and $300 million in third-quarter revenue. The high end isn't out of the question. At the current pace, the country might end up registering close to 10 million cases in the third quarter.

Despite the calculations and the seeming slam dunk that Fulgent will crush expectations, I'm not putting all of my eggs in one basket. No one can predict what the stock market will do. Even knowing the numbers won't help much. That's because it's hard to say what real expectations are baked into the stock price.

Wall Street analysts tend to follow the herd. And if the company is providing guidance, they aren't likely to stray too far. But those who own the stock have their own assumptions about Fulgent Genetics' growth. The next earnings report isn't due until the second week of November. In the meantime, I'm holding my shares and expecting Wall Street to get a big surprise. How the stock reacts is anyone's guess.