Please ensure Javascript is enabled for purposes of website accessibility
Log In Help Join The Motley Fool
Free Article Join Over 1 Million Premium Members And Get More In-Depth Stock Guidance and Research
By Brett Schafer – Sep 2, 2021 at 7:25AM

These companies can ride industry tailwinds for years to come.

Video games comprise one of the biggest industries worldwide. With 2.7 billion estimated players at the end of 2020, users spent $150 billion on video games last year, and annual spending is projected to grow to almost $270 billion a year by 2025.

However, even with this strong projected growth, video game stocks have generally tumbled in 2021, with the price of most stocks in the industry down year to date. This sell-off, which may only have occurred because of short-term concerns with pandemic-afflicted economies reopening around the globe, could provide some great buying opportunities for long-term investors. 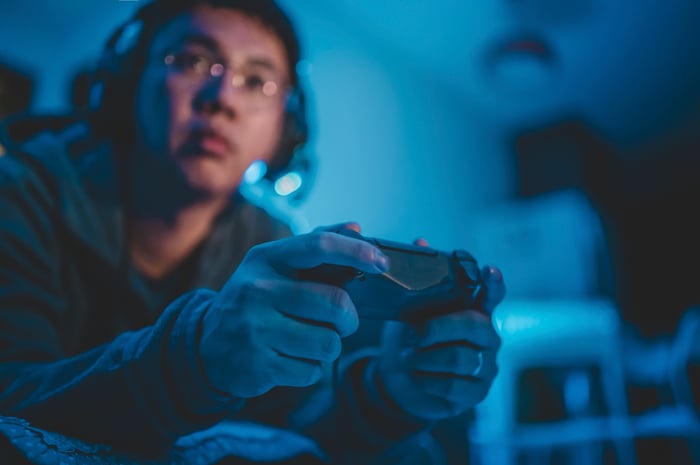 Activision Blizzard is a large American video game publisher with three main studios: Activision, Blizzard, and King. Its most important studio is Activision, which makes the well-known Call of Duty games. The franchise dominates the charts every year and produced seven of the 10 top-selling games in North America from 2010-2019. Blizzard owns fantasy-based franchises like World of Warcraft, Diablo, and Overwatch. This studio has been in trouble lately, with multiple allegations of sexual assault involving workers there coming to light this summer. However, it has a huge slate of games coming over the next 18 months, including new Overwatch and Diablo releases. Lastly, King is the company's mobile studio that owns Candy Crush, which has topped the mobile gaming charts for many years.

The charges of a "frat house" workplace environment that includes sexual assault allegations are troubling and need to get figured out, but Activision Blizzard has a lot of things moving in its favor at the moment. It launched Call of Duty: Mobile and Warzone (a free-to-play battle royale game) in recent years, which has helped boost revenue growth for the franchise. For example, in Q2, which is typically a light period for Call of Duty with players waiting for the new premium release in the fall, console and PC in-game net bookings (the revenue equivalent for video game companies) was four times as high as it was in Q2 2019. According to management, Call of Duty: Mobile is on track for $1 billion in consumer spending this year. The King Studio is looking strong, with advertising revenue growing over 100% year over year in the second quarter.

Activision Blizzard is guiding for $3.1 billion in operating profits in 2021. With a market cap of $63 billion, that gives the stock a forward price-to-operating income (P/OI) ratio of 20.2, which is well below the current market average. If you believe in the durability of Call of Duty, the resurgence of Blizzard games, and the continued growth of King advertising revenue, Activision Blizzard could be a great stock to own over the next decade.

Electronic Arts is another large American publisher with its fingers in many different franchises. Its longest-running games are FIFA, Madden NFL, and The Sims, which is historically where it got a lot of its revenue. However, it also has a bunch of smaller franchises like Battlefield (which has a new game coming this year), golf and hockey games, and Star Wars titles. On top of that, it has a promising new franchise called Apex Legends, which is a battle royale game similar to the very popular Fortnite game.

Apex Legends was launched a little over two years ago and has already hit $1 billion in lifetime net bookings. The franchise continues to grow its player base too, with Season 9 (upgrades to the game are labeled as Seasons) hitting a record for peak daily players with the franchise.

EA has made a bunch of recent game studio acquisitions, the two biggest being Codemasters and Glu Mobile. Codemasters brings racing games like Formula One under EA's umbrella, which should provide a durable cash stream each year. Glu Mobile is a mobile-focused studio that does over $500 million in annual revenue with many popular games coming from its team. The acquisition brings 500 mobile developers over to EA, which can hopefully jump-start the company's mobile strategy. Mobile is only 13% of Electronic Arts' overall net bookings, even though it accounts for 50% of all worldwide video game sales.

EA has a market cap of $40 billion and is guiding for $1.85 billion in operating cash flow this fiscal year. If it can hit that target, it will have a price-to-operating cash flow (P/OCF) ratio of 21.6, which is very reasonable if you believe in the steady growth of its franchises and new acquisitions. 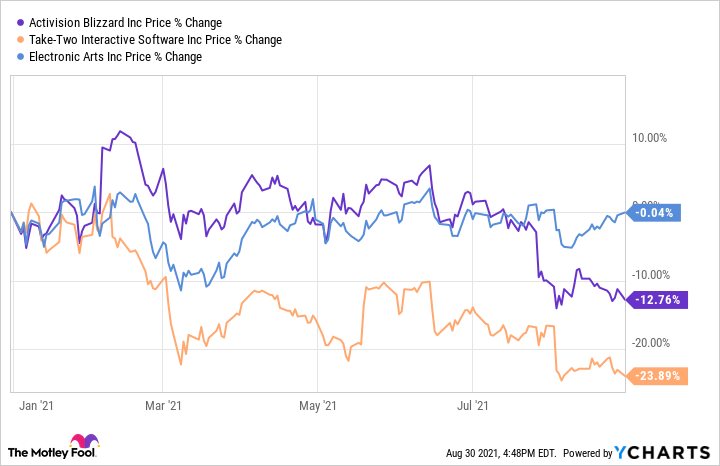 Take-Two Interactive owns the Rockstar and 2K studios. The majority of its revenue comes from three franchises: Grand Theft Auto, Red Dead Redemption, and NBA 2K. Grand Theft Auto V was released in 2013 and is the top-selling game of the past decade in North America. The studio hasn't released the next version, but that is because the game is still doing tons of sales a year through online channels. NBA 2K puts up consistent numbers for Take-Two, with an updated game every year and online content for players.

These franchises have led Take Two's net bookings to grow at a 17% compound annual rate since fiscal year 2017, hitting $3.55 billion in 2021. The company generated $920 million in operating cash flow last year. With a market cap of $17 billion, the stock trades at a trailing P/OCF ratio of 18.5. If you believe in the durability of NBA 2K, Grand Theft Auto, and its other franchises, Take-Two stock looks very cheap at the moment, providing a potential buying opportunity for investors focused on long-term results.