The two most telling indications of a quality dividend stock are earnings that consistently increase and dividends that grow along with that growing bottom line. Medtronic (MDT -0.77%) meets both of these criteria, and the S&P 500 component has raised its payout annually for 44 consecutive years, handily qualifying it for the status of Dividend Aristocrat.

But is the stock a buy at its current price?

Let's take a look at Medtronic's solid operating results for the start of its fiscal 2022 (which will end in April), its balance sheet, and its valuation to answer this question. 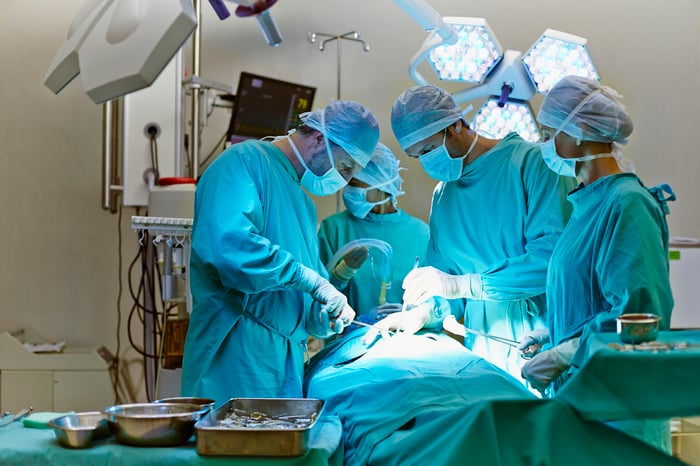 The company's fiscal first-quarter numbers, reported last week, were healthy. As a medical device company, Medtronic's revenue is heavily dependent on elective procedures, such as implanting pacemakers into patients with heart conditions or spinal cord stimulators into patients with chronic pain.

During Medtronic's earnings call for the period, which ended July 30, Chairman and CEO Geoffrey Martha noted that the volumes of procedures using most of its products had rebounded to pre-pandemic levels or higher.

It should come as little surprise, then, that the company met analysts' consensus estimate for $7.99 billion in revenue in the quarter, amounting to 22.7% year-over-year growth from the $6.51 billion it reported in Q1 2021, when many healthcare providers were postponing most or all elective procedures.

That revenue growth was almost entirely driven by essentially equal absolute dollar increases in its cardiovascular, medical surgical, and neuroscience segments, which accounted for 92.9% of Medtronic's quarterly revenue and 99.3% of its year-over-year top-line growth. Medtronic's smallest segment, diabetes, lost market share, and its revenue was up just 1.8% year-over-year from $562 million to $572 million.

The good news for Medtronic's diabetes segment is that the company is awaiting approvals from the U.S. Food and Drug Administration for its MiniMed 780G next-gen insulin pump system and Guardian 4 next-gen glucose sensor. Martha also indicated that the company expects to file its application with the FDA for its next-gen Synergy continuous glucose monitor (CGM) sensor some time in its fiscal third quarter (October 2021 to January 2022). Approvals of these products should all work to revitalize sales.

Even with the disruptions that the delta variant-driven fourth wave of COVID-19 is inflicting on healthcare providers in some geographies, thanks to rising vaccination rates among Americans, there should be far less need to delay elective procedures this fiscal year than there was last year.

The balance sheet is robust

Medtronic's balance sheet has proven strong enough to withstand the most difficult operating environment for the company in recent memory.

In other words, it was able to improve this metric despite a global pandemic. At this point, for Medtronic to be unable to meet its interest obligations, its EBIT would have to fall by more than 80%, its interest expenses would have to rise more than fivefold, or it would have to experience some combination of these two events.

Even though the company's operating fundamentals remain strong and its balance sheet is improving, it doesn't appear as though its stock is overpriced.

Based on analysts' forecast of $5.70 in non-GAAP EPS for Medtronic this fiscal year and its $134 share price, Medtronic is trading at approximately 23 times forward earnings. With analysts expecting 13.6% annual earnings growth over the next five years, that gives it a price-to-earnings-growth ratio of 1.7 -- a reasonable valuation.

Medtronic's payout ratio is set to be in the mid-40% range for this fiscal year, and at recent share prices, it yields a safe 1.9% (higher than the S&P 500's current average of about 1.3%). Further, the payout should grow in the high-single-digit percentages annually for the foreseeable future, which is why income investors should consider buying its shares soon.