Please ensure Javascript is enabled for purposes of website accessibility
Log In Help Join The Motley Fool
Free Article Join Over 1 Million Premium Members And Get More In-Depth Stock Guidance and Research
By Parkev Tatevosian, CFA – Sep 3, 2021 at 8:00AM

The deceleration is mostly contained in its less profitable segments.

At the pandemic's onset, economies worldwide put in place varying forms of stay-at-home orders. Additionally, governments forced non-essential retailers to shut their doors to the public.

Amazon (AMZN 1.63%) was not asked to halt operations. The company's business was built to thrive in such an environment. Thrive it did. In the four quarters that followed the outbreak, revenue grew by nearly 40% each quarter from the year before. But now that billions of people are vaccinated against COVID-19 and economies are reopening, sales are slowing for Amazon. However, that should not be any cause for concern among Amazon shareholders. 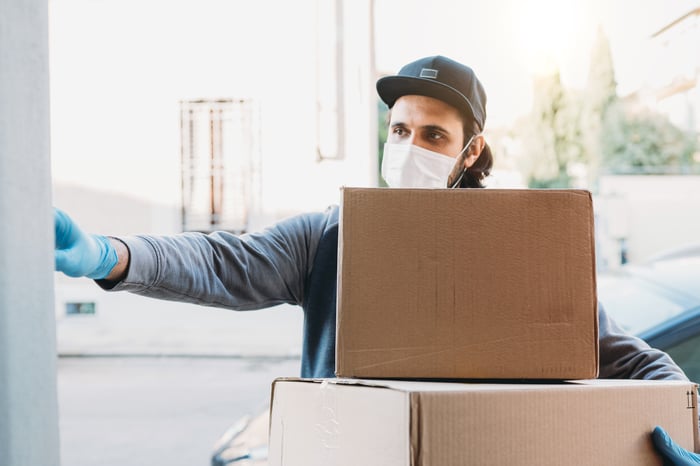 Growing where it counts most

This is what the last five quarters of revenue growth have looked like for Amazon, starting from the June 2020 quarter and ending with the June 2021 quarter: 40%, 37%, 44%, 44%, and 22%. The growth rate was cut in half in the most recent quarter as economies reopened. What's more, management is guiding investors to look for revenue growth in the range of 10% to 16% in the next quarter. It's clear that lockdown-era growth rates are over, and Amazon is settling back down to long-run rates.

That said, Amazon's more profitable segments are still growing faster than the company overall. Its Amazon Web Services division, which in the most recent quarter accounted for 54% of operating profits while making up 12% of revenue, grew by 37%. AWS helps businesses with web hosting and data storage, which are not likely to slow down even as economies reopen.

Further, Amazon's advertising revenue is still accelerating at a rapid rate. In the most recent four quarters, ad revenue has increased by 49%, 64%, 73%, and 83%. The segment actually benefits from economic reopenings as businesses need to get the word out that they are open. While Amazon does not break out the division's profitability figures, it is reasonable to assume the margins are higher than its retail sales segment. Selling advertising is mostly an automated process that has little cost of sales associated with incremental revenue.

Amazon's sales are indeed slowing down from boosted levels. However, that deceleration is mainly contained in its less-profitable online store sales. And more profitable segments like AWS and advertising are actually accelerating. That's no cause for investors to worry.

After all, it would be unreasonable to expect the surge caused by the pandemic to last indefinitely. Looking at the bigger picture, a greater share of consumer spending is migrating online, where Amazon dominates. In the near term, that trend may be choppy as economies reopen. In 2020, 14.4% of all shopping in the U.S. was online, up from 11% in 2019. That is estimated to reach 19.2% in 2024. While shopping may appear to be migrating online fast, over 80% of retail spending is still done in person. This is a figure Amazon can continue to chip away at for several years or more to come.

Fortunately for those looking for an opportunity to buy Amazon stock, the economic reopening has caused it to trade at the lowest price-to-earnings ratio in over five years, at 59. Continued growth in its profitable segments and a favorable valuation mean it might be a good time for long-term investors to start accumulating shares of Amazon stock.