When Lemonade (LMND 0.15%) went public last July, most investors likely focused on the online insurer's disruptive approach to selling insurance. It simplified the byzantine process by bundling several types of insurance into an AI-powered app that insured users within 90 seconds, and that streamlined approach made it popular with younger first-time buyers.

Lemonade continues to accumulate new users and their premiums at an impressive rate, but the winter storms in Texas this February highlighted a major long-term risk that many investors likely overlooked: climate change. The Texas winter storm caused the company's gross loss ratio, or the ratio of its losses and loss adjustment expense to its gross earned premium, to hit 121% in the first quarter of 2021. 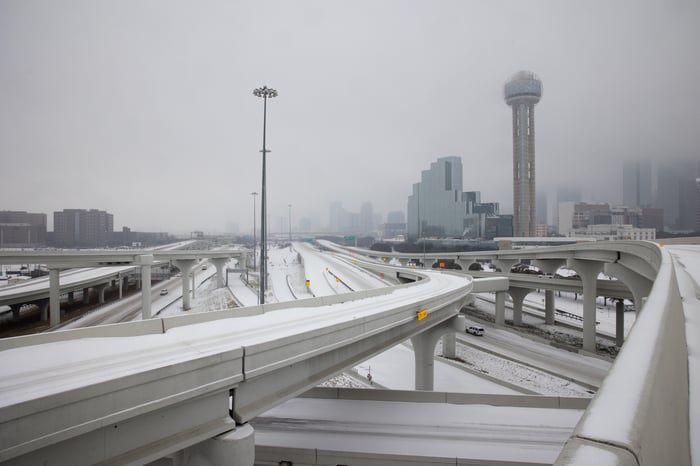 That ratio cooled off to 74% in the second quarter, but it could easily soar above 100% again as future natural disasters (and current ones like Hurricane Ida and various California wildfires) hit areas it serves. Let's see why climate change could be the ultimate threat to Lemonade's growth.

What Lemonade has told investors so far

Lemonade generates most of its revenue from homeowners and renters insurance, which leaves it heavily exposed to adverse weather events. In its IPO filing, it warned that "severe weather events and other catastrophes, including the effects of climate change and global pandemics, are inherently unpredictable and may have a material adverse effect on our financial results and financial condition."

Lemonade noted that "climate change may affect the occurrence of certain natural events" -- including hurricanes, storms, tornadoes, hailstorms, wildfires, and floods -- which could all impact the "demand, price and availability" of its homeowners and renters insurance plans. It also says it's ultimately "unable to predict the impact climate change will have on our business."

The situation could get a lot worse

Global mean temperatures and carbon dioxide levels are currently at their highest levels in recorded history, and a recent Intergovernmental Panel on Climate Change (IPCC) report estimates that with 1.5°C of global warming, "increasing heat waves, longer warm seasons, and shorter cold seasons" will occur. With 2°C of warming, the heat extremes would approach "critical tolerance thresholds for agriculture and health."

The IPCC estimates that greenhouse gas emissions from human activities have been responsible for roughly 1.1°C of warming since 1850-1900, but that warming level could surpass 1.5°C within the next 20 years as the global population continues to rise.

The panel warns that as those temperatures increase, countries will experience increased rainfall and flooding, rising sea levels, and other natural disasters. It notes that even if countries made "strong and sustained reductions" to their carbon dioxide and greenhouse emissions right now, it could still take two to three decades for global temperatures to fully stabilize.

Can Lemonade diversify its business to soften the blow?

The long-term threat of climate change is unavoidable, but Lemonade's diversification of its business with pet health and term life insurance products might cushion the blow.

Lemonade will also likely focus on expanding its geographic reach. It currently generates most of its revenue in just 10 states, with California, Texas, and New York accounting for 58% of its gross written premiums in the first half of 2021. All three of those states are heavily exposed to natural disasters like wildfires, tornadoes, and winter storms.

In addition to expanding across additional states, Lemonade will likely enter more overseas markets. It currently operates in Germany, the Netherlands, and France, but those markets aren't generating significant revenue yet. Expanding beyond the U.S. -- preferably into less disaster-prone regions -- could party offset its long-term climate change challenges.

Lemonade remains a polarizing stock for many investors. The bulls claim it could disrupt traditional insurers and gain tens of millions of new customers, but the bears claim its disruptive potential is overrated, it faces too many competitors with similar apps, its losses are widening, and its stock is overvalued at nearly 40 times this year's sales.

I own a small position in Lemonade, since I'm modestly optimistic about its growth prospects. But I'm also cognizant of its risks, and I realize that climate change could become a severe threat to Lemonade -- as well as other home insurance companies -- over the long term.