Casting a wider net could lead to a diluted image.

There are several reasons the stock has tanked. One is lessening demand, and another is a treadmill recall. But management's take on future growth during the fourth-quarter conference call added further disappointment.

One of the juicy tidbits in the call was the decision to lower the price of the company's original bike by $400. Is that a way to generate sales, or a desperate attempt to stem faltering demand? 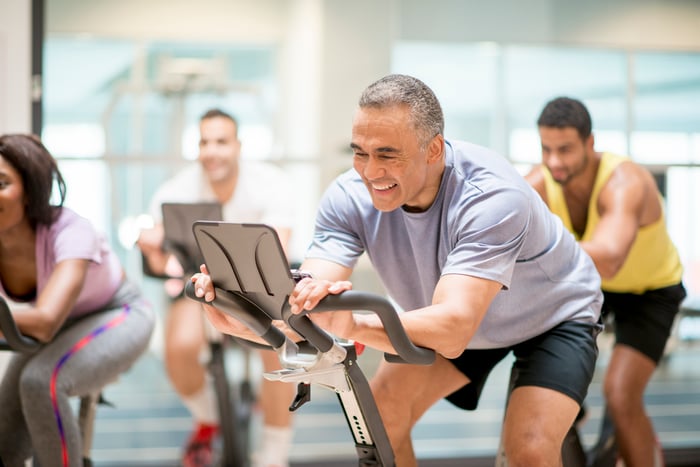 To be clear, Peloton still posted outstanding growth in the fourth quarter. Paid digital subscriptions increased 176% year over year, and connected fitness subscriptions increased 114%. Revenue grew 54%, which is a big slowdown from the triple-digit growth of the previous four quarters. But it's still on top of 172% revenue growth last year, which is pretty impressive.

So why the sour pickles? For one thing, Peloton is expecting top-line growth to really slow down in the 2022 first quarter, to only 6%, and gross margin to significantly contract year over year. On that note, lowering the price of its original bike can bring in new customers, and management sees that as a strong bet for sustainability. Its long-term strategy entails bringing customers in and getting them to stay, creating a continuing cash flow source per customer.

In Peloton's favor, it has certainly demonstrated that it can innovate and take bold, offensive shots. It made a commercial fitness equipment acquisition last year, and it has released a truly broad range of products, taking itself from a one-bike wonder to a real contender in the fitness industry.

And to be fair, this is not its first move into "fitness democracy." It already offers 0% financing for its expensive equipment, and it's been the biggest customer of the hot "buy now, pay later" provider Affirm for years (now potentially being overtaken by Amazon). It reduced the price of the standard bike already last year, but that was overshadowed by the introduction of the Bike+ and skyrocketing sales. Now, it looks like less of a strategic move and more like a desperate grasp. But it isn't necessarily.

There are companies that have been able to pull off a wider price range without tarnishing their premium images. Many tech companies have implemented this strategy to reach more people -- think Apple.

Peloton would fall into more of a consumer goods category, where price is baked into the premium image, and a broader price range can be more of a misstep. Think Under Armour.

But let's not forget that even at a price point of $1,495, the "cheaper" bike is far from cheap. It's certainly not the kind of drop that would dilute Peloton's upscale branding, even if it opens it up to a somewhat broader target market. And that's why it has a decent shot at success.

Peloton is no longer the power stock that it was last year, but if you bought at the IPO or before the pandemic, you're still sitting on a pile of gains. Growth may slow down, but sales increases in the face of tough pandemic comparisons are a good sign, and CEO John Foley said, "We believe that we are still in the first inning of connected fitness industry growth."

Investors may endure a wild ride from here, but long term, confidence is warranted.