Please ensure Javascript is enabled for purposes of website accessibility
Log In Help Join The Motley Fool
Free Article Join Over 1 Million Premium Members And Get More In-Depth Stock Guidance and Research
By Alex Carchidi – Sep 5, 2021 at 5:39AM

Their competition is in the rearview mirror, and customers are clamoring for their products.

Packing your portfolio with rapidly growing stocks is key, but it's all too easy to buy growth stocks that fizzle out after a couple of quarters. If you want to become more wealthy over the next few years and beyond, you'll need to identify companies that are supported by a handful of different trends and capabilities that reinforce their consistent and meaty growth.

All three of the healthcare companies I'll discuss today are highly successful, and they're also escalating their revenue-making potential by building on their difficult-to-imitate products. While the largest gains will go to investors who hold these innovative companies for years, they're also moving quickly enough to make the time between now and 2024 quite exciting, so let's dive in. 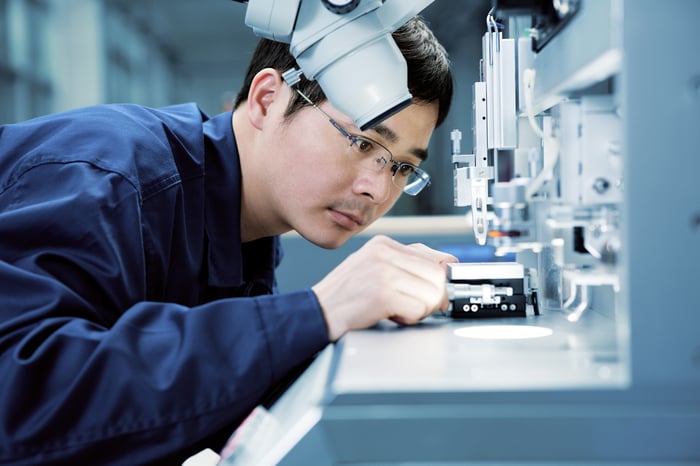 Intuitive Surgical (ISRG -1.46%) sells robotic surgery units to hospitals around the world, and business is booming. Even amid the economic disruption of the pandemic, the company increased its base of installed systems by 10% between June 2020 and the same period in 2021. That's a strongly positive sign for Intuitive's future, as every installed robotic surgery system implies significant future revenue from maintenance and sales of fresh tools and accessories. In 2020, a stunning 77% of its revenue was recurring.

And the more procedures that the robots perform per year, the more the hospitals end up spending. From the second quarter of 2019 until Q2 2021, the number of procedures performed by Intuitive's robots increased by a compound annual growth rate (CAGR) of 16.5%. In terms of revenue, that works out to a CAGR of 15% -- despite the near-total stoppage of elective surgical procedures amid the onset of the coronavirus pandemic.

Moving forward, Intuitive will be looking to increase the rate of new system installations to make up for lost time in 2020. All the while, it'll be working on making new surgical tools and instruments to expand the range of procedures that its robots can perform. That will lead to higher revenue from existing customers, and it might serve to attract new buyers, too.

While competitors may be starting to make inroads into the robotic surgery market, investors probably don't need to worry very much. Once hospitals have spent time and money training surgeons on a given surgical system, there's a high cost to switch to a competing product, so Intuitive can continue to make long-lasting headway even as competitors become more established.

Align Technology (ALGN 1.08%) makes invisible, removable teeth straighteners that are comparable in function to braces. But the company's Invisalign-branded products are arguably much more aesthetically appealing than braces, which is no small ingredient in its recipe for success.

By solving a key problem with a formerly dominant legacy product, Align has had an easy time finding prospective customers and gaining market share. Internet searches for doctors capable of fitting patients for Invisalign increased by 82% year over year in Q2.

Align also sells imaging technology to dental care professionals, which they can use to fit their patients for the company's straighteners. So, it makes money first when customers want to have the ability to sell its main product, and then again when customers buy cases of straighteners to distribute to patients. And sales are hot: In the second quarter of 2021, revenue from imaging systems rose by a whopping 20% sequentially, and income from cases of aligners rose by 11.6% sequentially, making for more than $1 billion in total revenue for the period.

Finally, Align is slated to reward its shareholders by initiating an accelerated stock buyback program worth $75 million to speed up its existing buyback program that's budgeted for $1 billion. The accelerated buyback should be finished by late October, so expect some upward pressure on the stock price between now and then. 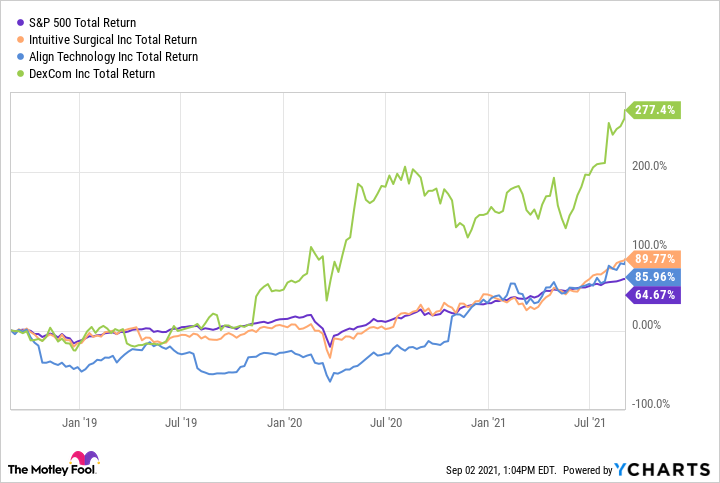 DexCom (DXCM -1.94%) develops continuous glucose monitors (CGMs) for people with type 2 diabetes. Unlike the traditional finger-stick method for measuring a person's glucose level, DexCom's CGMs use a disposable under-the-skin sensor that patients wear for 10-day intervals. Then, the sensor uploads data to a smartphone app, where patients can see their glucose levels in real time. That means patients can recognize when to take corrective action earlier, thereby better protecting their health and comfort -- and without needing to prick their finger multiple times per day. And when patients exhaust their supply of wearable sensors, they'll need to put in an order for another case. So there's a recurring component to DexCom's revenue base, which helps it grow more consistently.

Much like with Align Technologies, DexCom's product practically sells itself just because it doesn't have the fundamental flaws of the traditional option. Thus, it's no surprise that the company's total revenue grew by 32% year over year to reach $595 million in the second quarter of this year. What's more, management expects its gross profit margin to rise to 67%, an even larger increase than it initially predicted for 2021.

Before the end of the year, DexCom expects to launch the seventh edition of its CGM device. Meanwhile, management will be proceeding with international sales efforts in new major markets including France, Turkey, and India. Its stellar product, expanding revenue, and strengthening margins provide quite a lot for investors to like, and the next few years should be exciting for shareholders.