There may never be a reason to sell.

Some of the best-performing stocks can remain under the radar for years. Despite delivering huge gains year after year, most investors completely ignore them. That's because the attributes that make them great aren't always obvious at first glance.

Align Technology (ALGN 0.69%) falls into that category. Many write it off as a one-trick pony, selling a consumer product -- its Invisalign clear teeth straightening system -- through orthodontists at a higher price than traditional braces. But that misses the big picture. And the company's growth prospects. Here are three things to know that keep driving the stock up year after year. 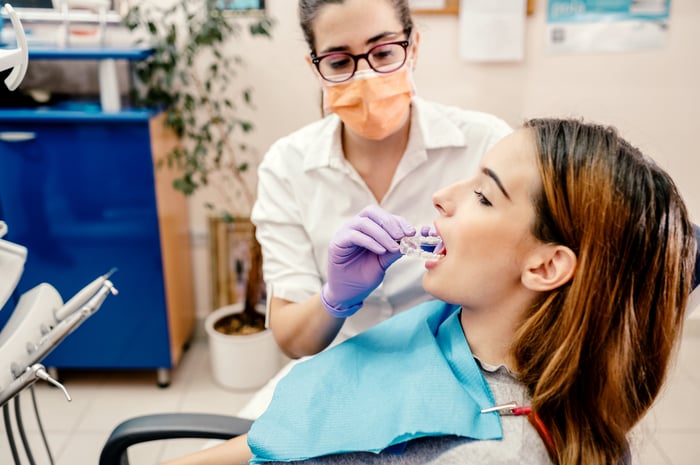 It has a large addressable market

Everyone loves a great smile. And more and more people of all ages don't want a mouth full of metal while they improve their own. Of the 15 million global orthodontic cases started each year, management believes 90% of them could be treated with Invisalign.

It's been steadily climbing toward that number. In all of 2016, the company shipped 708,000 clear aligner cases. In just the first six months of this year, it shipped more than 656,000. It's been growing that number by 14% annually over the last half-decade. It's also expanded internationally, as evidenced by the percent of sales from each region.

China remains an enormous opportunity. Management estimates one-third of the market opportunity is attributable to Asia Pacific. About 8% of Align's current revenue comes from China. Unfortunately, it doesn't break out the rest of Asia as a segment.

It has vertically integrated its value chain

One thing that many people don't realize about Align is how the company has systematically taken control of some of the steps in the journey from diagnosis to solution for patients seeking straighter teeth. It has primarily done this through acquisitions.

In 2011, the company purchased Cadent Holdings. The company made iTero 3D scanners for dentistry. Previously the two had partnered to develop software to run on the machines. The move paid off. What was a new technology a decade ago has become a critical cog in how the company delivers for patients. As of Q4 2020, 84% of the cases submitted to Align in the Americas -- and 73.7% internationally -- came via digital scanner.

Another important move was the 2020 acquisition of Exocad. The company's computer-aided drawing software allows Align to model teeth movement for patients and plan restorative surgery. It expanded the company's digital portfolio, as well as its reach. Exocad had 35,000 licenses installed across the globe when it became part of Align.

Pairing its clear aligners with the scanning and designing software helps patients see the value in the product -- what their smile will look like once they complete treatment -- and helps doctors be more productive.

All of its segments have improved utilization -- the number of cases shipped per doctor. But North American orthodontists are the standouts. The number of clear aligner cases per orthodontist has risen from 36.6 in 2016 to 65.0 in 2019, before the pandemic. The integrated technology helps the company keep adding users. It trained 21,000 new doctors last year.

It has delivered fantastic results for all stakeholders

Align's success with orthodontists and general practitioners has translated to its financials. The company grew revenue 31% annually between 2016 and 2019. And after one terrible quarter in the middle of the pandemic, both sales and operating income for the first half of 2021 have returned to levels significantly higher than 2019.

It might not come as a surprise to find the stock is up 675% in the past five years. That handily beat the S&P 500 index. 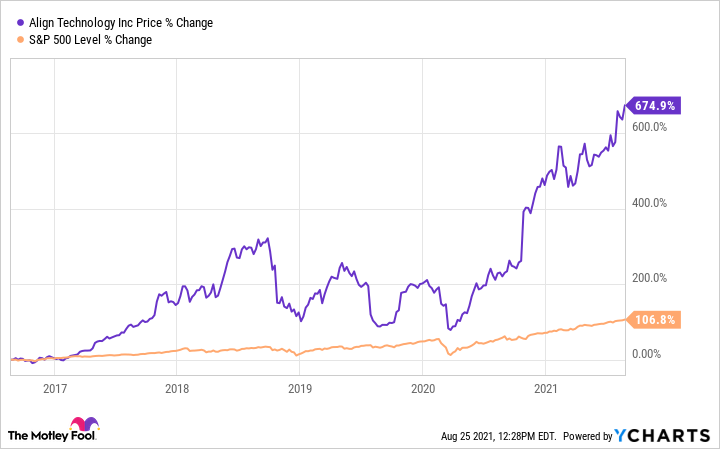 By all accounts, it looks like more of the same. Not only are revenue and profits accelerating, but its primary competitor seems to be falling behind. SmileDirect Club (SDC 0.70%), the other large player in the clear aligner space, recently reported results that should give Align shareholders comfort.

For the six months ended in June, the company posted $351 million in revenue. Far from Align's jump from pre-pandemic levels, SmileDirect Club's sales actually trailed the same period from two years ago. That doesn't bode well for a direct-to-consumer offering that should have taken share during the shutdowns.

For investors with a three to five year timeline, shares of Align should prove to be market beaters. The company is tightening its grip on a large and growing market and has a history of big stock gains. While the stocks of fast-growing companies could be punished if the market gets volatile, shareholders can hold tight knowing there is an underlying business performing better and better every year.