The leading provider of clear aligners is firing on all cylinders right now.

Align Technology (ALGN -1.67%), the company behind the Invisalign system of clear aligners, reported a whopping $1.0 billion in topline revenue during the second quarter. This was more than expected and the first time in the company's history that topline revenue reached a 10-figure sum.

Shares of this popular healthcare stock have soared 135% over the past year and investors want to know if it can keep climbing. Let's take a closer look to find out if Align Technology is a good buy right now. 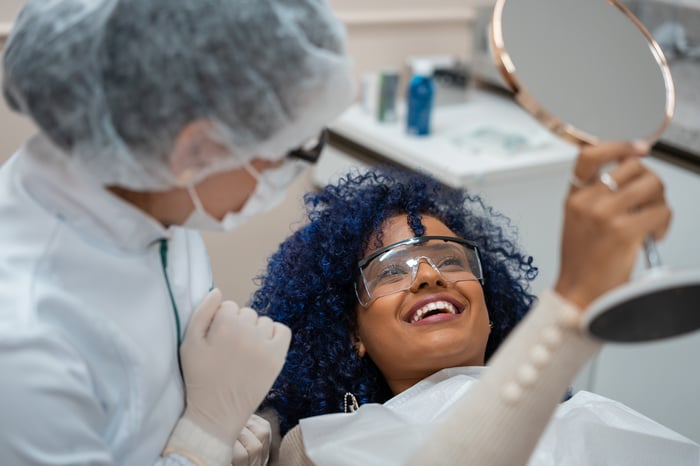 Customers who want to get fitted for Align Technology's clear aligners generally require more interaction in an actual dentist's office than its biggest competitor in the tooth alignment space, SmileDirectClub (SDC -6.55%). Around this time last year, when COVID-19 made visiting dentists nearly impossible, it seemed like SmileDirectClub would take a huge bite out of Align's share of the clear aligner market. To the surprise of many, this was not the case.

SmileDirectClub won't report second-quarter sales until Aug. 9, 2021, but a record-breaking performance from Align Technology in the first half of 2021 has SmileDirectClub shareholders wishing they had backed a different horse.

Align Technology's biggest competitor had been predicting second-quarter sales growth of 5% to 7% compared to the first quarter of 2021. Following a cyber attack in early May, though, management told investors to expect second-quarter revenue to hold steady or fall slightly.

Back and better than ever

Coronavirus lockdowns pressured clear aligner volumes last year but the company has bounced back stronger than ever. The number of cases shipped in the second quarter tripled year over year to 665,600 cases, which was 11.7% more cases than the company shipped in the first quarter.

Clear aligners aren't just for adults anymore. Align Technology shipped 181,000 cases to teens during the second quarter, which was 9.5% more than during the first three months of 2021.

Interest from dental practices trying to attract customers hungry for tooth alignment is rising even faster than sales of the aligners themselves. Revenue from Align Technology's 3D digital imaging systems and related services more than tripled year over year to a record $170 million.

The rapid uptake of Align Technology's latest iTero mouth scanner and related services could translate into accelerating growth of the aligners all these scanners are capable of producing. Don't be surprised if the company exceeds topline expectations over the next several quarters.

Successful marketing of the slick new iTero digital imaging tools to dentists put Align Technology in an easily defendable position. Any competitor that wants to try marketing new 3D imaging equipment and aligners to dentists who are already comfortable with Align's mouth scanners and the Invisalign process is facing an uphill battle and that's if they can get past a thicket of patent protections.

SmileDirectClub members who can't make a $1,950 payment upfront can make monthly payments on the aligners the company markets as an inexpensive alternative. Align Technology reported an average selling price of $1,330 on comprehensive products and just $1,035 on non-comprehensive products in the second quarter. 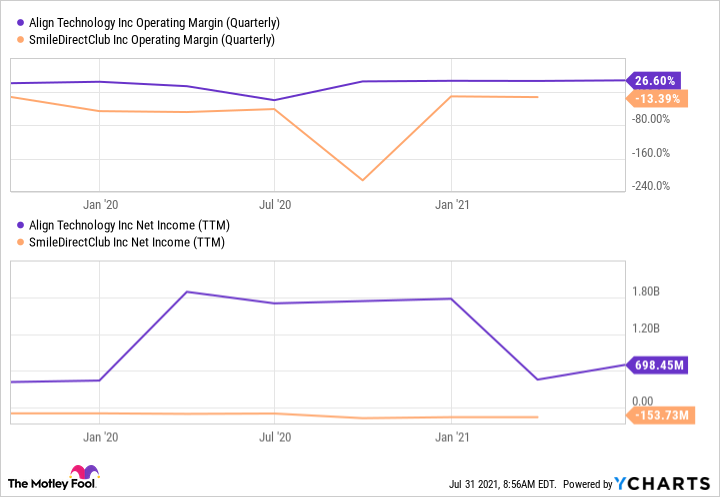 Despite average selling prices per client that are significantly less, Align Technology's well-managed operation is pulling in a healthy profit while SmileDirectClub's still posting significant losses.

At recent prices, Align Technology shares trade at frightening 79 times trailing earnings. That means any slowdowns or even the hint of a slowdown will result in a stock market beat down. With an incredibly strong competitive position in the clear aligner market, though, this healthcare stock has what it takes to grow into its valuation and outperform over the long run.