Please ensure Javascript is enabled for purposes of website accessibility
Log In Help Join The Motley Fool
Free Article Join Over 1 Million Premium Members And Get More In-Depth Stock Guidance and Research
By Sushree Mohanty – Updated Sep 7, 2021 at 10:18AM

Outstanding quarterly results yet again prove these three pot stocks have the potential to turn your investment into millions.

It's no longer a surprise when U.S. cannabis companies report an outstanding quarter. The marijuana boom that started amid the coronavirus pandemic lifted both revenue and earnings for pot companies, and the continuing expansion of state marijuana legalization has kept the momentum going. Though the federal ban on marijuana poses some difficulties, that is not stopping these companies from expanding. 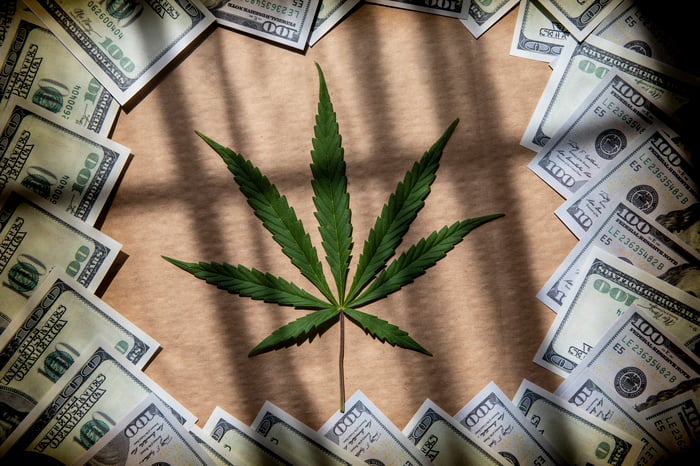 Green Thumb grew revenue 85% year over year to $222 million in the second quarter ended June 30. The company attributed this growth to its 58 open and operating retail stores. Most revenue came in from key markets like Illinois and Pennsylvania, where it operates nine and 16 retail stores, respectively.

Illinois, a relatively new recreational market (which legalized adult use in January 2020), has generated close to $753 million in sales through July. The state is on its way to breaking last year's record of $1 billion in sales for the full year. Illinois being Green Thumb's home state is an added advantage. The company also entered the Virginia cannabis market by acquiring 100% of cannabis grower and producer Dharma Pharmaceuticals. In July, Virginia made recreational cannabis legal, but retail sales won't begin until Jan. 1, 2024.

The revenue growth also brought in fourth consecutive quarter of profits -- this time reaching $22 million, versus a net loss of $13 million in the year-ago period.  It ended the quarter with cash and cash equivalents of $359.2 million and $198 million in total debt outstanding. With rising revenue and profits, it is in good financial standing to clear its debts. It holds licenses for 111 retail stores in 14 U.S. markets.

Cresco has also benefited from the growing Illinois market. Its second quarter, ended June 30, saw a whopping 123% year-over-year increase in revenue to $210 million. The company's retail revenue, generated from 33 stores during the quarter, grew to $101 million, up 157% year over year. Much of the credit goes to its Sunnyside retail platform. Cresco has 11 Sunnyside stores in Illinois.

The company reported adjusted earnings before interest, taxes, depreciation, and amortization, or EBITDA, of $45 million and net income of $2.7 million for the quarter, compared with a loss of $41 million in Q2 2020. Though Cresco doesn't have a large national presence yet, it is in a stable financial position to continue expanding as more states legalize marijuana. It ended the second quarter with cash and cash equivalents of $131 million and term loan debt (net of issuance costs) of $189.4 million.

Trulieve has been consistently performing well in the last few quarters. Most of the credit goes to sales from its home state of Florida, where it operates 85 stores. In its recent second quarter, its total revenue grew 78% year over year to $215 million. This higher revenue contributed to another quarter of profits, which also marked its 14th consecutive quarter of profitability. It recorded adjusted EBITDA of $95 million, a 55% jump from the prior-year quarter, while net profits of $41 million showed a 16% year-over-year increase.

The company's acquisition of Arizona-based Harvest Health & Recreation in May was the highlight of the industry this year. Once complete, this acquisition will allow Trulieve access to markets in Arizona, Pennsylvania, and Maryland, with a total store count of 140 and 3 million square feet of cultivation capacity in the U.S.

The only thing Trulieve needs to change now is its reliance on the medical cannabis market, especially in Florida. The recreational segment is a hot opportunity in the U.S., with ever more states legalizing adult-use marijuana. Trulieve should concentrate more now on developing quality recreational products, in particular derivatives like vapes, edibles, and beverages. These high-margin products can boost the company's profits.

Financially, the company is in a sound position. It ended the second quarter with cash and cash equivalents of $289 million and net debt of $118 million at the end of Q2.

Are they millionaire-maker stocks?

All three companies have already reached half a billion dollars in revenue each in the first half of 2021, and each is also profitable. With marijuana sales rising, I wouldn't be surprised if each one manages to generate $1 billion or more revenue by year-end. That revenue growth will boost profits as well. So imagine the growth when federal legalization happens. Wall Street analysts have huge expectations for these three stocks. In the past three years, Green Thumb's, Trulieve's, and Cresco's shares have gained 182%, 165%, and 95%, respectively, while the industry benchmark, the Horizons Marijuana Life Sciences ETF, has fallen 48%. 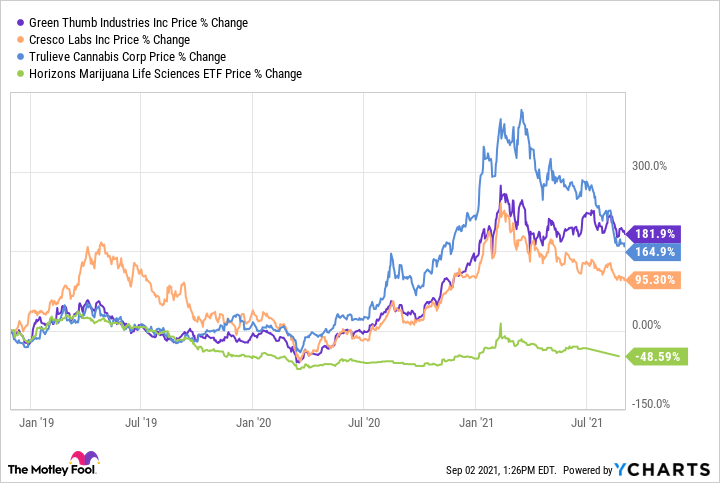 The question is, can they make you a millionaire? I believe they can. But note that investment is a long-term game. Each of these stocks is selling for less than $30 today; if that price were to reach $100 in the next 10 years, buying 10,000 shares of each of these pot stocks now could easily turn your investment into millions. Based on the current trading price, investors would need to buy $264,000, $295,000, and $96,000 worth, respectively, of Trulieve, Green Thumb, and Cresco to turn that investment into seven figures if and when the stocks reach $100 each.