EVgo's public debut has seen things go from bad to worse for the stock.

Electric vehicle fast-charging network company EVgo (EVGO -3.63%) had a rough first full month of trading as a public company. The company went public through a merger with a special purpose acquisition company (SPAC) in early July, and shares have dropped almost 40% since then. In August alone, EVgo shares were down 22.7%,  according to data from S&P Global Market Intelligence.

Several things explain the stock's performance since its public debut, and particularly in August. The poor performance of other electric vehicle sector companies that have gone public through SPACs reinforced negative sentiment. But EVgo also didn't help itself when it registered to issue potential new shares through warrants just one month after it started trading. 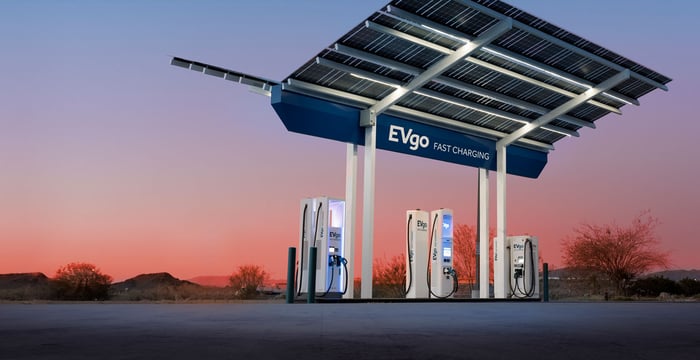 The company also didn't give investors any news or guidance that generated new excitement when it issued its first quarterly financial report on Aug. 11.

EVgo reported revenue of $4.8 million in its second quarter, ended June 30. That represented 16% sequential quarterly growth and 62% over the prior year's period.

That puts the company on track for the previously estimated $20 million in revenue for 2021. But the company also said in its initial investor presentation that it expects exponential revenue growth that could reach more than $300 million by 2024 and more than $900 million by 2026. Investors are probably taking those early predictions with a grain of salt, as other companies in the sector have underperformed growth estimates after going public.

The electric vehicle market is still expected to grow quickly. But investors want to see more progress toward realizing that same acceleration in revenue growth for the charging-network companies. EVgo did reaffirm its 2021 guidance in its second-quarter report, but investors probably won't see a significant recovery in the stock until its prior predictions are closer to coming to fruition.

Why EVgo Stock Continues to Sink
363%