The cryptocurrency exchange may be sued by regulators.

Cryptocurrency exchange Coinbase Global (COIN 1.41%) announced today that the U.S. Securities and Exchange Commission (SEC) intends to sue the company over Coinbase's Lend program, which has been announced but hasn't yet launched. The company expressed confusion and defiance over the SEC action, and Coinbase shares were down 4.5% as of 11 a.m. EDT.

The company received a Wells notice from the agency, with Coinbase saying it believes the enforcement "may involve a civil injunctive action" and that Coinbase "may seek other remedies." The Coinbase Lend program is intended to pay customers a 4% interest rate on their holdings of the Coinbase-backed stablecoin USD Coin (USDC 0.03%). 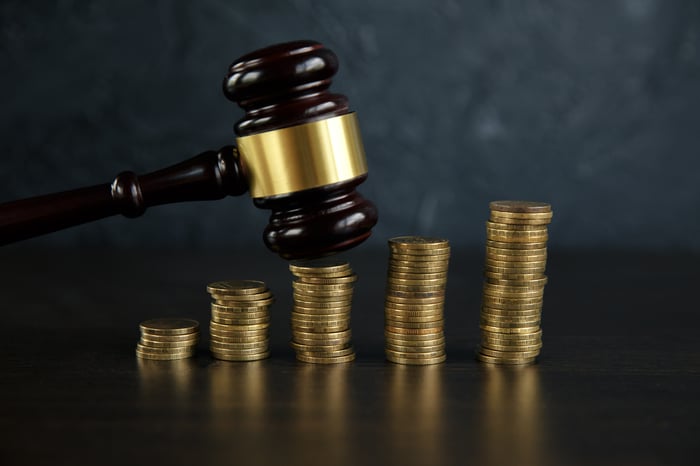 The company reacted to the notice with a mix of confusion and defiance. On the company's blog, chief legal officer Paul Grewal said the company was "surprised" and that "we don't know why" the notice was issued.

The company questioned the enforcement action because Grewal said Coinbase could simply have launched the interest-paying program, since it doesn't qualify as a security in which customers would invest.

Instead of simply launching the product, "Coinbase has been proactively engaging with the SEC about Lend for nearly six months." He said that Coinbase wanted to be fully transparent and hear the regulator's perspective on the innovative program.

Coinbase CEO Brian Armstrong was more aggressive in his comments. He called the SEC's behavior "sketchy." He added, "They refuse to tell us why they think it's a security, and instead subpoena a bunch of records from us (we comply), demand testimony from our employees (we comply), and then tell us they will be suing us if we proceed to launch, with zero explanation as to why."

Taking the disagreement to the media isn't perhaps the best approach, and some shareholders are selling Coinbase stock today, at least until the smoke clears.