Shares of MercadoLibre (MELI -2.13%) gained 19% last month, according to data provided by S&P Global Market Intelligence. The leading digital payment provider in Latin America saw revenue more than double year over year in local currency. This performance comes after a strong first quarter, in which revenue grew 158% year over year adjusted for currency.

In late August, MercadoLibre also announced the acquisition of Kangu to expand its logistics operations and speed up delivery times in Brazil. 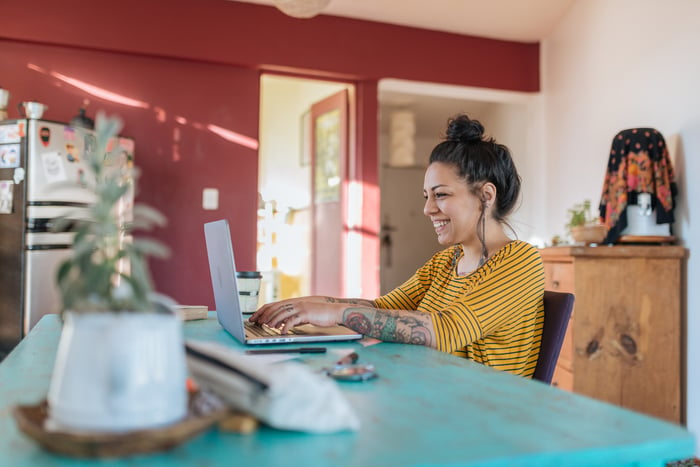 Some online companies haven't been able to sustain their robust growth from last year, but investors are taking notice of MercadoLibre's stellar performance. "The data so far is encouraging as it seems to point to consumer behavior shifts toward online purchasing having staying power," CFO Pedro Arnt said during the earnings call.

On a two-year comparable basis, total payment volume on a currency-neutral basis has accelerated from the mid-140% range in the first quarter to nearly 200% in the second, which is impressive. MercadoLibre is benefiting from offering the complete e-commerce package to Latin American consumers, including a marketplace, logistics, and mobile payments in a region that is far behind other countries in e-commerce penetration.

MercadoLibre will face tougher year-over-year comparisons in the third quarter, where currency-adjusted revenue soared 148% year over year in the same period in 2020. But the long-term trends in e-commerce point to continued growth for the company.

Management believes the shift in consumer behavior that started during the pandemic should set the stage for sustained long-term growth throughout Latin America, which is the fastest-growing e-commerce region in the world.

MercadoLibre recently launched same-day shipping from its fulfillment centers in Brazil, Mexico, Argentina, and Chile, with more geographies to come. As it expands its logistics capabilities and fintech solutions to millions more users in the region, it's building a strong competitive moat that will be difficult to overcome.

Is MercadoLibre Stock a Buy Now?
366%