Everyone likes a bargain, and buying stocks "on sale" is particularly alluring when the companies hitting a rough patch have familiar names, such as those in the Dow Jones Industrial Average. The index is up by about 16%, but the three laggards' stock performance is in negative territory.

However, before you jump in, it's important to understand that investors have sent the stock prices down for a reason. With that caveat in mind, it's time to examine this year's worst-performing companies in the Dow Jones Industrial Average to see if these are value stocks or if their troubles have only begun. 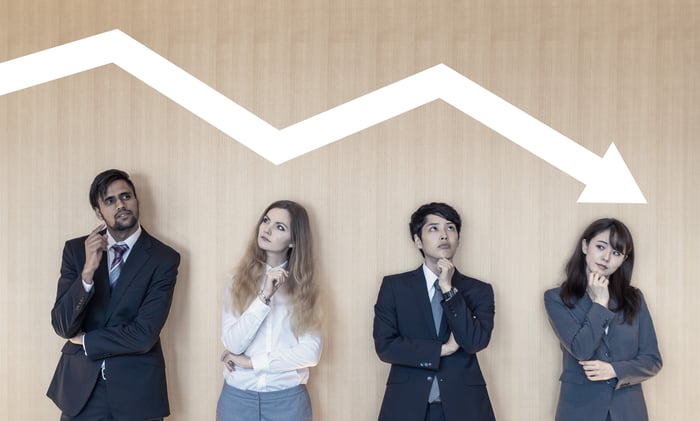 Verizon Communications (VZ -0.39%) is a giant in the telecommunications sector. Its services include wireless, home telephone, cable television, and internet connectivity in the populous Northeast region and Washington, D.C.

Aside from falling nearly 6% this year (through early September), the stock price was also down more than 4% in 2020 compared to the Dow Jones Industrial Average's greater than 7% gain.

Verizon has invested heavily in 5G wireless, which raised concerns about the uncertain payoff. Additionally, Verizon has taken on additional debt. As of the second quarter, the total was $151.9 billion compared to $111.5 billion at the end of 2019. The combination has given investors some pause. But the company has launched 5G commercially, and there is evidence that customers have been adopting the higher speeds. In the second quarter, 20% of its consumer clients had cellular phones that could handle 5G. Meanwhile, overall revenue grew by nearly 9% to $33.8 billion.

While results are on the upswing, investors can enjoy the 4.5% dividend yield during the wait for the stock price to catch up. Based on Verizon's free cash flow, which was $11.7 billion in the first six months of the year, it can easily support the payments; during that period, dividends were $5.2 billion.

Merck (MRK 0.22%) is a well-recognized pharmaceutical company that makes drugs for humans and animals. Its stock price is down nearly more than 7% this year. The prior year was rough for stockholders too; the price dropped by more than 10%.

Results have been impacted by COVID-19, with 2020's sales up a tepid 4% when excluding the impact of foreign exchange translations. But there is more going on than the pandemic, and management is taking bold steps to divest itself of noncore, slower-growing business. The most recent move was spinning off its women's health business earlier this year. Organon (OGN 1.14%) is the newly public company.

This makes Merck increasingly reliant on cancer treatments, particularly Keytruda. The oncology drug's sales grew by 30% last year and account for 30% of its top line. Part of this growth is driven by the company's getting governmental approvals for the drug to treat different cancers. This includes the U.S. Food and Drug Administration recently giving the nod for Keytruda to treat advanced endometrial carcinoma and advanced renal cell carcinoma.

Ideally, Merck will maintain a deeper pipeline, and there's been some progress on that front. In the recent quarter, Gardasil and Bridion were among the drugs that had strong sales growth, along with the animal health division. Overall adjusted sales rose by 19% to $11.4 billion.

While waiting for its next blockbuster drugs, you can enjoy Merck's 3.4% dividend yield. However, its first-half free cash flow of $1.2 billion wasn't sufficient to cover the $3.3 billion of dividends, indicating Merck will have to generate more cash flow in the future.

Amgen (AMGN -0.15%) is a biotech company that develops therapies using novel technologies such as advanced genetics to treat various diseases. Amgen has had a lot of success over the years in this cutting-edge arena. However, the stock has lost 8.25% this year after falling by 3.76% in 2020.

The COVID-19 pandemic hurt sales moderately last year as demand was curtailed due to patients staying at home. Other factors, including increased competition, resulted in lower demand for some products, as did pricing pressure. Still, Amgen's 2020 revenue was up by 9% to $25.4 billion. While COVID-19 pressures eased this year, the company continued to lower prices on some treatments, and second-quarter revenue growth was 5% to $6.5 billion.

Management expects this lukewarm sales pace to continue this year. Its 2021 guidance calls for revenue of $25.8 billion to $26.6 billion, representing 1.5% to 4.5% growth.

For patient investors who believe Amgen will produce nw blockbusters, there is the stock's 3.1% dividend yield. Amgen's $1.7 billion of free cash flow in the first half of the year easily covered the $1 billion of dividends.

While these three stocks each have their merits, which should you take a flyer on?