The video game retailer has now stumbled in 11 of its past 12 financial updates.

GameStop (GME 3.46%) has met its Kryptonite, and apparently it comes in the form of an earnings report. "Will GameStop stock finally break the curse of earnings season?" I asked last week, as the stock had fallen the day after posting quarterly results in 10 of the past 11 financial updates.

We still have a trading day to get through to reach the finish line on this grim run, but the stock was already moving 9% lower in after-hours action on Wednesday night, four hours after the earnings release. Yes, GameStop continues to be one of the market's biggest winners over the past three years. It's just stunning that the shares have pulled back after what is shaping up to be 11 of the past 12 quarterly performance announcements. 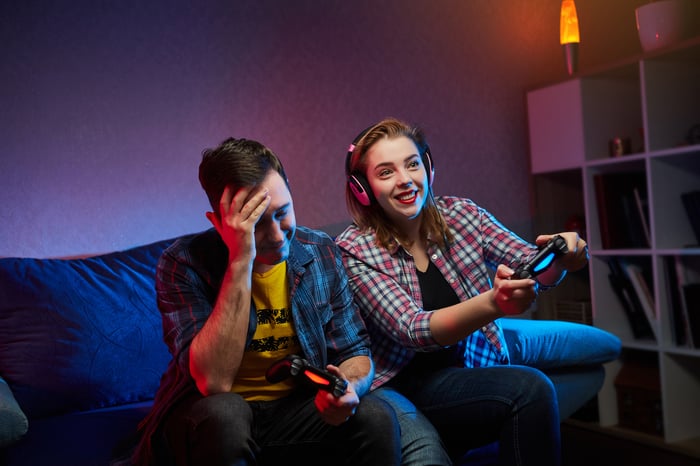 The video game retailer's latest quarter doesn't look so bad at first glance. Net sales soared 26% to hit $1.183 billion, ahead of the $1.12 billion that analysts were expecting. But remember that like most retailers, GameStop was going through a sales funk a year ago, with folks sheltering in place for the pandemic. We would eventually embrace gaming as a way to pass the time, but the first few months were rough.

Wednesday's fiscal second-quarter top line is actually 8% below the $1.286 billion it delivered during the same three months of fiscal 2019, and 21% below where it was three years ago. A beat is still a beat, but expectations are higher now given where the stock was two or three years ago.

GameStop also didn't score a beat at the other end of the income statement. Its quarterly deficit narrowed to $0.85 a share -- or $0.76 a share on an adjusted basis. Wall Street pros were targeting a loss of just $0.66 a share. Adding salt to the miss wound, the share count has ballooned 12% over the past year as the chain has issued more stock to take advantage of this year's buoyant share price. The loss would've been greater on a per-share basis if it wasn't for that move.

There is good news, too. GameStop's balance sheet is in much better shape than it was a year ago. It has more cash and less long-term debt. The new management team has the time and the means to try to regain its relevance. A welcome by-product of GameStop's meme stock rush to fame is that it now has die-hard retail investors ready to back its local and online initiatives.

It's still a very peculiar phenomenon. GameStop shares are up 13-fold over the past three years, but in that time they have taken a step back following all but one of the dozen quarterly updates the company has provided. Even now, with the stock soaring year to date, the earnings-day hits are actually getting worse. If the 9% after-hours slide gets worse by Thursday's close, it will be the fifth consecutive quarter of a double-digit percentage decline the day following a GameStop earnings report.

The buzz for video game stocks is real. We love our diversions more than ever. Exactly what role GameStop will play in the era of direct distribution between developer and gamer remains to be seen, but it now has the liquidity to give it several chances to get it right. It's OK to be bullish on GameStop. It's just been a bad idea to be bullish the day after it steps up with fresh financials.