Energy plays a huge role in the global economy, and it remains highly divisive within the investment community. There is a slow shift underway from oil and natural gas to renewable sources such as wind and solar power. Stem (NYSE:STEM) could play a major role in this transition, as its technology helps manage the energy grid.

Stem is just starting to accelerate its revenue growth, and its small size within a large energy market makes it a compelling investment idea to consider.

Renewable energy has been around for years, but has seen its usage really increase over the past decade as technology has improved enough to make the cost of producing green energy competitive with that of fossil fuels. According to the International Renewable Energy Agency, the cost of solar power has fallen 82% since 2010. 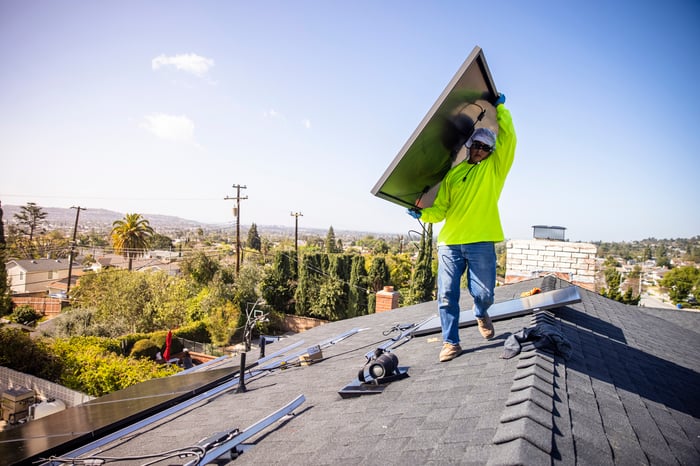 However, the sun doesn't always shine, and the reliability issues of renewable energy have made it challenging to add it into the energy grid effectively.

Stem partners with battery manufacturers like Tesla Motors, Samsung, and Panasonic to sell energy storage systems to other companies. Stem then layers its proprietary artificial intelligence Athena on top, utilizing the energy grid to decide when to charge or draw power from the batteries. This demand response technology focuses on uptime for its customers while using artificial intelligence to save money by powering its system as efficiently as possible. In other words, Athena will use data from peak usage, weather, time of day, and pricing data to always seek out the most cost-effective method to power its customers in real-time.

Revenue growth is about to accelerate

Stem generated just $19.3 million in its 2021 second quarter, but is guiding for full 2021 revenue of $147 million, meaning that the business is about to accelerate revenue growth moving forward.

The company works "behind the meter" with commercial businesses to reduce electricity costs, and "front of the meter" with utilities and developers to provide grid stability. Stem's backlog of contracts grew to $250 million in 2021 Q2, a 36% increase year-to-date; the company already sells to large corporations like Home Depot, Amazon, Walmart, and UPS, and the push for carbon neutrality across the corporate landscape could help Stem pick up new customers. It is also pursuing co-op projects in 26 states, expanding its business with utilities and developers.

As Stem continues to work with high-profile customers and grow its footprint, it could see a lot of this demand turn into revenue growth. Wall Street analysts estimate that Stem could grow its revenue to $318 million in 2022, a 116% increase from 2021 estimates.

The stock is a bargain for long-term investors

Stem currently trades at a market cap of $3.3 billion and a price-to-sales ratio of 22 using management's 2021 revenue guidance. This isn't "cheap," but the stock could become reasonably priced in a hurry because revenue growth is expected to remain strong.

If the company hits 2022 revenue estimates, the stock's P/S ratio will fall to just 10 by next year. Demand will increase for integrated energy storage over the next decade and beyond; management cites Bloomberg New Energy Finance as estimating an additional $1.2 trillion in new revenue opportunities for integrated storage to be deployed by 2050. Stem's $3.3 billion market cap could leave a lot of room to expand, even in the presence of competition.

Some risks to keep in mind

Stem has shown promise within an enormous energy market, but the stock isn't risk-free. It doesn't make its own batteries, which means it relies on the battery manufacturers it partners with. It's possible that Tesla, a company with deep pockets and artificial intelligence experience through autonomous driving, could decide to develop an in-house AI system to pair with its batteries and cut Stem out.

The energy management space is also highly competitive with indirect competitors such as the companies that Stem partners with for batteries and energy exposed conglomerates such as Honeywell, to direct competitors like Kiwi Power seeking to decentralize the power grid. Stem's artificial intelligence has won over big clients, but it's a young company and will need time to demonstrate its effectiveness against competitors.

Investors can realize great returns when an innovative company changes the face of a large, outdated industry. We have used fossil fuels for centuries, and the steady shift to integrated energy systems is underway. Stem's ability to bring efficiency to the modern energy grid could make it a huge company someday, which is why it's a compelling investment idea for September.