The enterprise-focused database company is on a different mission.

The relational database, which stores data in neat rows and columns, has been the standard for decades. Oracle has long dominated that world, and many businesses are stuck with their on-premises Oracle databases.

NoSQL databases, which usually store data in flexible documents, have emerged as a compelling alternative. Modern applications create and consume data differently and have many more users than legacy applications. The rigidity of a relational database doesn't mesh well with a rapidly changing cloud-first world.

Given the success of NoSQL pioneer MongoDB (MDB -4.44%), which is now worth around $32 billion following a blockbuster quarterly report, betting on smaller NoSQL database companies could make sense for investors convinced that NoSQL is the future. Couchbase (BASE -2.54%), which went public in July, is one such option. Unfortunately, the company's first earnings report left a lot to be desired. 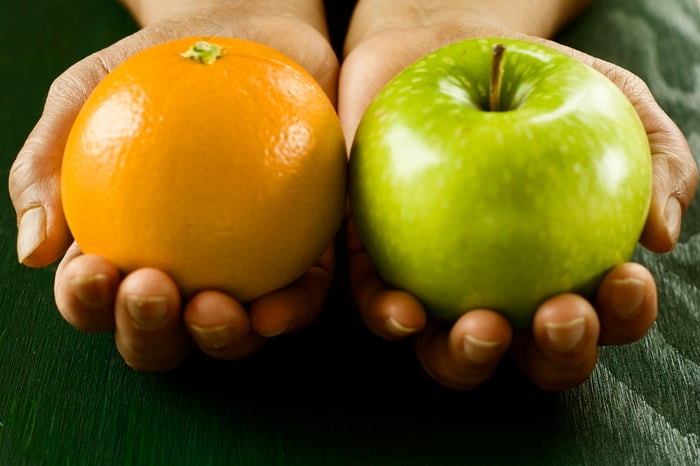 Couchbase's results were mixed relative to analyst expectations, but there was nothing all that impressive on an absolute basis. Revenue grew by just 18% year over year to $29.7 million, and annual recurring revenue jumped by just 20%. The company posted a net loss of $14.5 million, nearly double its loss in the same quarter last year.

Compare these results with those of the much larger MongoDB. That company's revenue shot up 44% to $199 million in the second quarter, and its cloud-based Atlas product grew by 83%. MongoDB is unprofitable, as well, but its heavy spending on sales and marketing is translating into impressive growth. The same can't be said for Couchbase.

Couchbase and MongoDB do have some fundamental differences. While MongoDB is popular among developers big and small, Couchbase is very much aimed at enterprise customers. Couchbase is built to power mission-critical applications and is designed to offer the performance, reliability, and scalability that the largest companies require. "We focus our selling efforts on the largest global enterprises with the most complex data requirements," reads Couchbase's S-1 filing.

While MongoDB's on-premises products are aimed at large enterprises, its Atlas cloud-based database is accessible to developers and companies of any size. Anyone can easily spin up an Atlas cluster using the free tier and upgrade as their needs change. MongoDB is aiming to be the standard choice in the NoSQL era, while Couchbase is focusing solely on the largest companies.

Couchbase's slow growth rate isn't all that surprising, then, given that sales cycles can be long in the enterprise world. The company does have one big advantage over MongoDB when it comes to winning over enterprise customers: Couchbase provides an effective bridge from old-school relational databases.

Moving from an Oracle database to a MongoDB database requires a company and its developers to think about and interact with their data in a whole new way. While Couchbase is a NoSQL database, it supports an SQL-like query language for accessing and manipulating that data. Developers that have been dealing with relational databases for decades will feel right at home.

Selling to enterprises can be an expensive proposition, and it shows in Couchbase's results. The company poured $22.3 million into sales and marketing in the second quarter, eating up nearly all its gross profit. Couchbase may also be more susceptible to prevailing economic conditions, since large enterprises tend to delay big tech transitions during uncertain times.

Still, there's certainly a place for a NoSQL database company that caters to the largest of customers. Couchbase has the potential to become a highly profitable company if it can lock in enough enterprise customers. And eventually, Couchbase could expand its sales efforts to smaller companies and try to eat some of MongoDB's lunch.

Couchbase is still worth about $1.6 billion after a double-digit decline following the disappointing second-quarter report. The company expects revenue of around $120 million this year, so the stock trades at a price-to-sales ratio of about 13.

That's far lower than MongoDB's astronomical price-to-sales ratio of nearly 40, so an argument can be made that Couchbase is an inexpensive way to bet on NoSQL databases. But be careful: Couchbase's growth will likely be more measured than its larger peer.

Here's Why Couchbase Stock Was Crushing the Market Today

Why Couchbase Stock Crashed On Thursday
366%