The donut haven went public in July, and the price has sunk since.

I think Krispy Kreme (DNUT -3.79%) makes the best donuts in the world. You can debate me on that, but I won't budge. However, that doesn't necessarily make it an excellent investment.

The donut company debuted on the stock market in July, and so far, the market isn't treating it very nicely. But its first earnings report was pretty darn good. So what's with the sinking price? 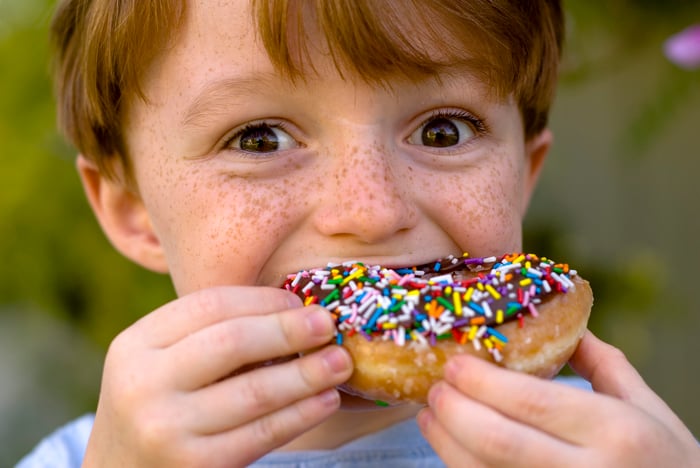 Indulgence food does well during financial downturns. That makes sense, since consumers start focusing on affordable luxuries. Krispy Kreme increased sales by 17% in 2020, but it's doing even better in 2021. In the second quarter, sales increased 42% year over year.

It sells donuts in 30 countries, and it offers the full omnichannel experience, with order ahead and delivery. As of the end of Q2, it has almost 10,000 points of access, which include anywhere you can get one of its products. That's a big jump from just over 6,000 stores at the end of 2019.

But it only operates 1,500 donut shops globally, which is nowhere near Dunkin' Donuts' 11,300 locations. That might be why Krispy Kreme hasn't become the place to get your morning donut. Krispy Kreme boasts that more than 75% of orders are for a half or whole dozen donuts, but that might be a bit of a drawback. Chains such as Starbucks, which has more than 33,000 global stores, are successful for the opposite reason -- customers come in daily for their fix. Dunkin', which was taken private in 2020, has also become a stop for a morning coffee.

Krispy Kreme has a new "branded sweet treat line" that's sold in convenience stores and could drive growth, as well as the Insomnia Cookie line that's delivered hot to college dorms and other locations. The well-rounded product line offers several growth streams, and its relatively inexpensive price helps make it an affordable luxury.

The company is also expanding its store count to increase access to its products and perhaps become more of a daily staple. It added 1,300 global "points of access" in the first half of 2021 alone, and it's planning to add 800 to 1,000 annually.

The full 2021 guidance looks pretty good, with the company expecting 19.4% to 23% top-line growth. The market did send the stock price up after the earnings release, but it's come back down, and it's down 20% year to date as of this writing.

Krispy Kreme is likely to keep churning out its delicious donuts, expand internationally, and grow its sales. And there's always the chance that it can turn itself into more of an experience, bringing in customers for their daily coffee or treat. But as it stands, it's not likely to become the next great growth stock, and the market is judging it accordingly.