Please ensure Javascript is enabled for purposes of website accessibility
Log In Help Join The Motley Fool
Free Article Join Over 1 Million Premium Members And Get More In-Depth Stock Guidance and Research
By Leo Sun – Sep 10, 2021 at 7:30AM

Coinbase (COIN -2.50%) has been a hot topic over the past month. The cryptocurrency exchange provider's stock rallied in mid-August after its big earnings beat, while rising prices for Bitcoin (BTC 2.22%), Ethereum (ETH 4.15%), and other cryptocurrencies amplified those gains.

El Salvador's adoption of Bitcoin as one of its national currencies in early September attracted even more bulls, but the abrupt threat of a lawsuit from the Securities and Exchange Commission (SEC) ended that rally. Let's unpack all those events, and see how they impact Coinbase -- and if its stock is still a worthy investment. 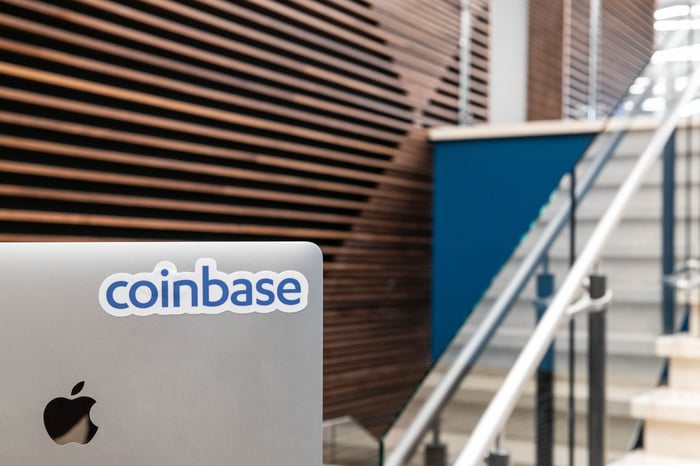 Coinbase owns the largest cryptocurrency exchange in the U.S. It enables investors to purchase a wide range of cryptocurrencies, store them in online wallets, and link their crypto balances to debit cards. It also processes cryptocurrency payments for businesses and offers a digital stablecoin called the USD Coin, which is pegged to the value of the U.S. dollar.

Coinbase generates most of its revenue from transaction fees. Its revenue rose 144% to $1.28 billion in 2020, then skyrocketed 969% year over year to $4.03 billion in the first half of 2021. It ended the second quarter with 8.8 million monthly transacting users (MTUs), up from 6.1 million MTUs in the first quarter and 1.5 million MTUs a year ago.

Coinbase didn't provide any guidance for the rest of the year, since its growth is tethered to volatile cryptocurrency prices, but it predicted it would end the year with a midpoint estimate of 7 million MTUs.

Wall Street expects Coinbase's revenue to rise 432% this year, which seems to suggest its stock is actually undervalued at 10 times this year's sales. Coinbase is also firmly profitable, and it trades at just over 50 times forward earnings.

El Salvador's adoption of Bitcoin was surprising since it wasn't suffering from the rampant inflation associated with many other Latin American countries. Instead, El Salvador largely stabilized its economy and inflation rates by adopting the U.S. dollar as its national currency two decades ago.

El Salvador will still accept payments in U.S. dollars along with Bitcoin, but the government claims Bitcoin will reduce the country's banking fees and help it reach more unbanked individuals.

Coinbase generated 76% of its revenue in the U.S. and the remaining 24% in Europe last year, so the El Salvador news won't directly impact its business. However, El Salvador's move will indirectly help Coinbase by boosting Bitcoin's price, and it's already sparking rumors that other countries -- especially El Salvador's inflation-stricken neighbors -- could follow its lead.

On Sept. 8, Coinbase said it had received a Wells notice -- which expresses a regulator's intent to sue a company -- from the SEC regarding Lend, an upcoming interest-bearing feature for its crypto platform.

Lend will allow Coinbase's users to lend out USD Coins to earn interest. The SEC claims this feature is a security, which is subject to tighter regulations, and it plans to sue Coinbase if it proceeds with the launch.

Coinbase claims Lend isn't a security because its customers aren't "investing" in anything. It says Coinbase would be obligated to pay out interest regardless of its other business activities, and that customers could still request their USD Coins to be repaid at any time. However, that business model closely resembles securities lending -- which is probably why the SEC got involved.

On its own, a delay or cancellation of Lend won't hurt Coinbase. But the SEC notice suggests regulators could start scrutinizing other aspects of Coinbase's cryptocurrency business in the near future.

Is Coinbase's stock worth buying?

Coinbase is growing like a weed and seems reasonably valued, but it's still an all-in bet on the cryptocurrency market. Therefore, its future growth is wildly unpredictable, and investors should be deeply skeptical of Wall Street's longer-term estimates for the company.

Investors who have an appetite for risk and are bullish on cryptocurrencies can directly buy the coins instead of investing in Coinbase. Meanwhile, investors who are less bullish but still want some exposure to the crypto market might favor diversified fintech companies like Square instead.

I'd prefer to stick with one of those two options instead of buying Coinbase, which could attract more regulatory pressure as it expands. It will likely loom large in the headlines and be closely associated with cryptocurrencies for the foreseeable future -- but it's a bit too risky for my tastes.