Stocks as a rule are riskier than bonds or other fixed-income assets, but the downside to those right now is that Treasury bonds, bank accounts, and CDs are paying very low interest. As such, many retirees may be looking for safe-haven investments in stocks -- quality businesses that can be expected to grow steadily while delivering some dividend income in the process.

Johnson & Johnson (NYSE:JNJ) is a diversified titan in arguably the most critical industry in the world: healthcare. Its long track record of success and dividend payouts could make it "the" stock for retirees.

A dominant business in healthcare

Johnson & Johnson is behind some of the most well-known health and personal care brands in the world, including: 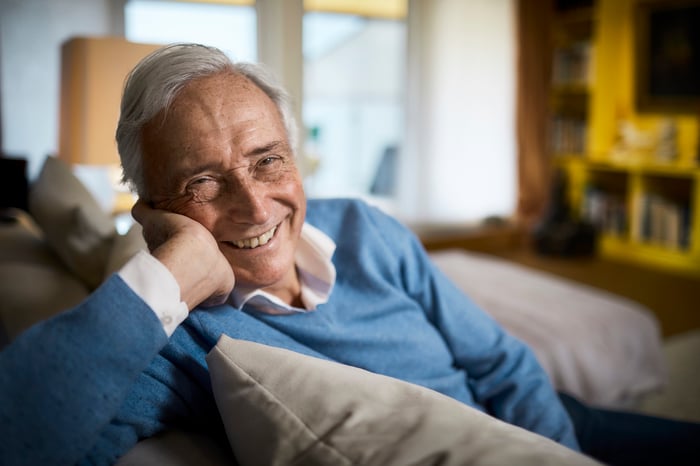 And these products came from its consumer health segment, which is actually the smallest part of the company. Johnson & Johnson is an enormous operation with three primary divisions -- consumer health, pharmaceutical drugs, and medical devices. It did more than $82 billion in revenue in 2020.

The global healthcare industry's revenues are forecast to top $10 trillion annually in 2022. As medical care advances in developed countries and the quality of care continues to improve in emerging economies, Johnson & Johnson will have a large sandbox to grow in.

There are many healthcare businesses to invest in, but Johnson & Johnson's financials set it apart from most. Its pharmaceutical business leads the way, contributing 55% of total revenue, followed by medical devices at 28%, and consumer health providing the balance.

Johnson & Johnson is extremely profitable, turning $20.2 billion of its 2020 revenue into free cash flow, a conversion rate of 24%. Its balance sheet currently holds $25.2 billion in cash, equivalents, and marketable securities. And the company's AAA credit rating from Standard & Poor's is the highest the agency bestows -- and is better than the current rating of the U.S. government. In other words, Johnson & Johnson is considered less likely to default on its debt than Washington, which is almost mind-bending to think about. That's some serious financial security.

It literally pays to hold the stock

Thanks to all the cash Johnson & Johnson generates, shareholders have enjoyed many years of rising dividend payments. Its current annual payout is $4.24 per share, which at recent share prices amounts to a yield of 2.46%. That's not too shabby, considering that banks now pay interest of just 0.06% on average.

The company has also increased its payout annually for the past 59 years -- making it a Dividend King -- and has boosted it at an average rate of 6.45% over the past decade. In addition, its dividend payout ratio remains affordable at 62%, so Johnson & Johnson has plenty of room to continue steadily increasing its dividend from here.

There is a lot to like in Johnson & Johnson, but no company is perfect.  There are more than 34,000 open lawsuits against Johnson & Johnson over its talcum baby powder, which was alleged to contain cancer-causing asbestos; the legal costs are estimated to be approaching $4 billion.

The company has been setting aside a fund to help cover these legal costs and is allegedly attempting to spin off its talcum powder business as a separate company to separate its liability from the rest of Johnson & Johnson's assets.

Johnson & Johnson's enormous size and balance sheet are likely to make the talcum lawsuits a short-term hiccup. Still, it's worth recognizing that healthcare companies are not immune from trouble.

Johnson & Johnson is expected to bring in earnings per share of $9.67 for 2021, giving the stock a forward price-to-earnings ratio of 17.8. The S&P 500 trades at a forward P/E ratio of 22, so Johnson & Johnson's valuation is discounted despite its stellar fundamentals.

Analysts expect the company's profits to grow by 7% to 8% annually, which will allow it to continue doling out dividend increases and maintain its great financials, so retirees can probably expect more of the same from Johnson & Johnson.