You can go big this month with these three pharmaceutical stocks.

Big pharma stocks appeal to many investors. Why? They often offer relative stability and solid (albeit not always spectacular) growth prospects. Many of these stocks also provide strong dividends. 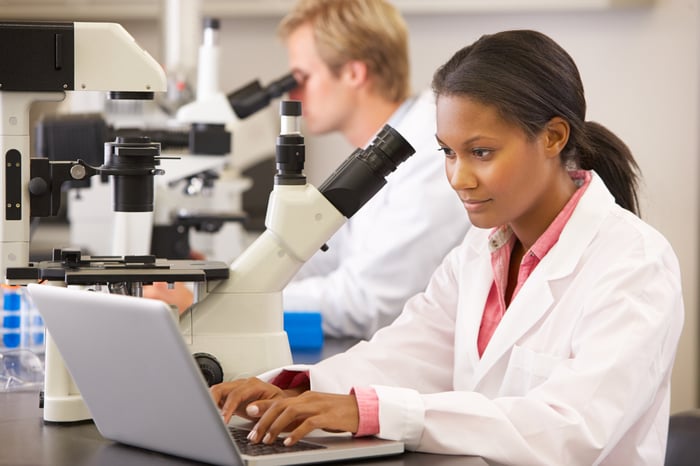 Prosper Junior Bakiny (Merck): Pharma giant Merck is best known for its blockbuster drug Keytruda. This medicine is approved to treat a raft of cancers, including lung cancer, skin cancer, and head and neck cancer. Keytruda is still undergoing more than a dozen clinical trials and its sales will continue growing thanks to label expansions. This cancer medicine is projected to become the best-selling drug in the world within the next few years.

Naturally, Keytruda is one of Merck's key growth drivers. During the second quarter, sales of the oncology medication came in at $4.2 billion, 23% higher than the prior-year quarter. With that said, Merck's business extends beyond this single drug, as important as it is to the company's growth strategy. Other notable products in Merck's lineup include its human papillomavirus (HPV) vaccine Gardasil, whose sales during the second quarter jumped by 88% year over year to $1.2 billion.

Merck does owe this performance in part to the ongoing recovery from the pandemic. The company's sales dipped for much of last year due to the outbreak, and with things starting to get back to some semblance of pre-COVID normalcy, the drugmaker is benefiting. Merck estimated that the pandemic's recovery contribution to its year-over-year sales growth was about $900 million. Still, sales of Merck's HPV vaccine were growing rapidly even before the pandemic.

Then there is Merck's booming animal health business. In the second quarter, revenue from this unit grew by 34% year over year to $1.5 billion. Thanks to the growing human population and improved living standards, the demand for animal protein will remain strong, helping animal health companies such as Merck. The market for products aimed at companion animals -- which Merck also offers -- has a bright future as well.

With multiple growth opportunities at its disposal, Merck's prospects look enticing. To make things even better, the company has underperformed the market in the past year, which has helped make its stock a bit more attractive. The drugmaker is currently trading for 13.6 times forward earnings -- compared with the pharma industry's average of 14.7.

At these levels, Merck is definitely one pharma giant investors should strongly consider buying.

Keith Speights (Pfizer): It makes sense that COVID-19 vaccine Comirnaty is the main thing investors focus on with Pfizer. After all, the vaccine will likely rake in $33.5 billion this year. Even though Pfizer splits the profits with BioNTech, that's a lot of money.

But there's a lot more to like about Pfizer than this one vaccine. For example, the company has other vaccines, notably including its Prevnar 13/Prevnar 20 franchise. It's also in a leadership position in the race to develop a respiratory syncytial virus (RSV) vaccine.

The healthcare giant's pipeline features close to 100 clinical programs, with more than 20 in late-stage testing. Those numbers are likely to increase in the near future. Pfizer plans to acquire Trillium Therapeutics for $2.3 billion. This is a deal that investors should love because it's a great fit at a reasonable price.

Then there's the dividend. Pfizer's dividend yield currently tops 3.3%. It would be even higher, but the stock has soared this year.

Finally, Pfizer's shares trade at less than 13 times expected earnings. With this attractive valuation combined with its solid growth prospects and great dividend, I think this big pharma stock is a smart pick to buy in September.

Zhiyuan Sun: (Teva Pharmaceutical): If you want to buy pharmaceutical stocks on the dip, there is no better bargain than generic-drug maker Teva. During the second quarter of 2021, the company brought in $3.9 billion in revenue and $625 million in free cash flow -- roughly unchanged from last year's quarter. However, it's important to note that whatever bad news investors expect is already baked into Teva's stock price and then some. In fact, you could buy shares for as little as 3.6 times forward earnings and 0.6 times forward revenue.

Teva is on the verge of settling legacy issues that brought the company to its knees in the first place. To begin, it expects to resolve allegations related to its role in the opioid pandemic with a $250 million cash payment and donation of $23 billion worth of Suboxone (naloxone) to health authorities. Keep in mind that's just the drug's list price, and it would cost far less for Teva to manufacture it.

Secondly, the company is rapidly moving on the fallout from the U.S. patent expiry of its once blockbuster multiple sclerosis drug, Copaxone. New medicines, such as its migraine drug Ajovy, have quickly gained traction while Copaxone sales are steadily increasing in Europe, where it does not go off-patent until 2030.

For the full year, Teva sees up to $16.2 billion in revenue and $2.15 billion in free cash flow -- both of which are tiny considering its market cap of $10 billion. Overall, it is a top pharma stock to buy now as it turns around and leaves behind its troubled past.