Shopify (SHOP -0.78%) stock has made long-term investors a boatload of money. If you would have been able to buy shares of the e-commerce subscription platform at its 2015 IPO price, you'd be sitting on gains of nearly 9,000%!

In this short period, the company has risen to become the largest Canadian company by market capitalization with a valuation approaching $200 billion. Still, the company has its work cut out for it to earn "four-comma status" by 2025. Here's what investors need to know. 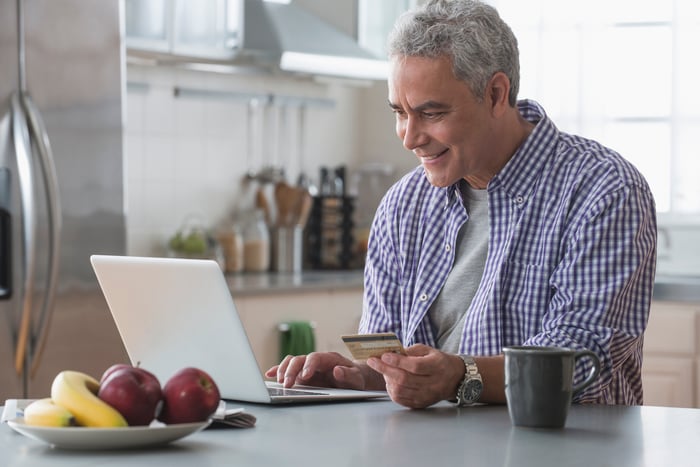 Difficult but not impossible

For Shopify to become a trillion-dollar company by year-end 2025, the company's market capitalization would have to grow at a compound annual rate greater than 50% every year. While the company has done this -- and more -- since its IPO, it becomes immensely more difficult to replicate this mind-boggling growth over time.

Despite the difficulty, it's certainly not impossible, as many mega-cap stocks proved last year. Last year Tesla saw its stock jump nearly 800% and Apple added approximately $1 trillion in market capitalization!

Shopify finds itself in an industry with significant tailwinds. Even in the developed U.S., e-commerce is only 13% of all retail sales and is expected to grow to 23.5% by 2025, according to eMarketer. These trends boosted Shopify's biggest competitor, Amazon, which became a trillion-dollar company last year as shares soared 78%.

In the second quarter, Shopify did so by beating analyst expectations on the top line by reporting total revenue growth of 57% and its first $1 billion quarter. However, the numbers are even better than they initially appear when broken down by segment.

Shopify's smaller revenue source is subscription services, the fees it charges sellers, or "merchants," to use its tools. The second is merchant services, which consists of the revenue Shopify earns from those merchants in the form of add-on services like payment processing and transaction fees.

In the year-ago quarter, merchant services grew faster than subscription revenue, which makes sense when you consider the pandemic increased the demand for online shopping. This year's growth was led by subscription services, which was boosted by more merchants beginning to use Shopify's e-commerce platform and existing merchants buying higher-priced subscription bundles.

This is an encouraging development because the number of sellers on Shopify's platform will be the most important long-term driver of results. Keeping all other factors equal, more sellers leads to higher gross merchandise volumes on Shopify's platform, which will boost future revenue from its merchant services segment. Consider this as a virtual circle that begins with growing the number of sellers on its platform.

Additionally, subscription-based revenue has significantly higher margins than merchant solutions, so its growth will continue to boost Shopify's bottom line. The takeaway is merchant adoption continues at a rapid pace and will be a boost to future returns.

An obstacle on the path to a trillion-dollar company by 2025 is valuation compression. Currently, Shopify trades at 48 times sales with a price-to-earnings ratio of 77, which will likely continue to shrink as the company's market cap rises.

Below are the same metrics for Amazon, which offer a yardstick on the valuations investors are comfortable providing mega-cap e-commerce companies.

Using Amazon as a comparable to determine the revenue and net income Shopify would have to have in today's environment to become a trillion-dollar company, the company would need to grow its top line to $244 billion and its bottom line to $16.4 billion.

Over the trailing-12-month period, Shopify reported $3.9 billion in revenue and $2.45 billion in net income, meaning the company would have to grow its top and bottom lines every year of the next four by 181% and 61%, respectively, to become a trillion-dollar company.

The Amazon comparison isn't perfect due to business model differences, particularly using revenue as a benchmark. Amazon works as both a retailer that sells its own inventory and as a third-party e-commerce platform, whereas Shopify is essentially the latter. That said, even bottom-line growth at these levels will be difficult to obtain.

It's unlikely, but not impossible, that Shopify will be a trillion-dollar company by 2025. However, that doesn't mean investors should ignore the stock. The truth is the company has a bright future ahead and should be able to provide long-term investors with market-beating returns.

A trillion-dollar market capitalization is difficult in any country, but if a Canadian company will hit that goal, it's likely to be Shopify. The long-term trends boosting e-commerce are too strong to ignore and sellers are finding Shopify's platform as the best plug-and-play way to reach online buyers.

My Top Cathie Wood Stock to Buy in December
376%