Unity powers the creation of 3D across a range of industries and use cases.

Since going public last September, Unity Software (U 9.69%) has already been a rewarding investment. Despite falling 23% from its 52-week high, the stock has still rocketed 94% higher in just under a year.

Even so, now looks like a good time to add Unity to your portfolio. Its business plays into several key trends -- video games, augment and virtual reality, and artificial intelligence -- and I believe the stock price could easily triple in the next five years.

Unity has a big market opportunity

Unity is a software company. Its platform allows clients to create, run, and monetize interactive 2D and 3D content across a range of devices, from mobile phones and gaming consoles to augmented and virtual reality headsets. For instance, game developers use the Unity engine to render characters and virtual worlds in real-time, bringing their creative visions to life. 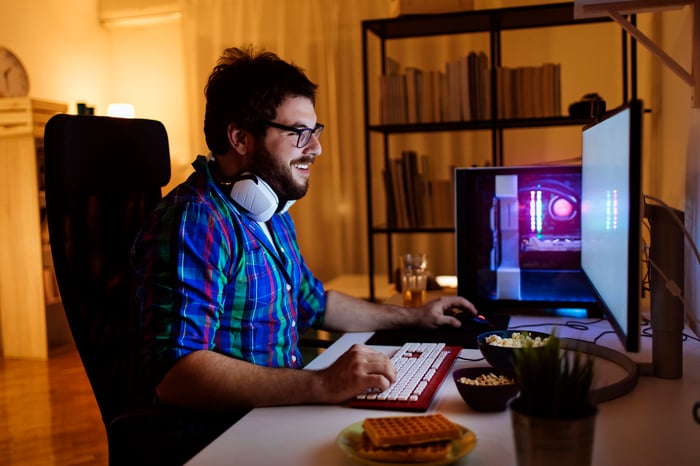 But Unity's platform has use cases in other industries as well. With its tools, architects can plan construction projects, automakers can render models of cars, and filmmakers can create and edit animated scenes. Unity's platform can also be used as a simulation engine to train artificial intelligence models, such as those used in autonomous vehicles or robots.

Collectively, Unity puts its market opportunity at $33 billion by 2025, comprising $16 billion in the gaming industry and $17 billion from other use cases. However, that number should rise in the future, as technologies like the metaverse move from science fiction to reality.

Traditionally, 3D content development has been costly and tedious. To create even the most basic interactive experiences, engineers had to invest significant time and resources to build the necessary tools. And even then, they had to recode content for each individual platform (i.e. Windows, Mac, Xbox, PlayStation).

Unity solves these problems. Its real-time software allows creators to simultaneously visualize and edit content, accelerating the development workflow. And once complete, content created with Unity can be deployed across more than 20 different platforms without writing a single line of code. Moreover, creators can monetize their games with tools like Unity Ads and Unity IAP, which facilitate the sale of ad inventory and in-app purchases, respectively.

Video games have become a booming industry, and mobile gaming represents the largest and fastest-growing segment in that industry. That has translated into strong demand for Unity's software tools. In fact, the company had 1.4 million monthly active creators on its platform last year.

Moreover, Unity's top line is accelerating. In the most recent quarter, sales surged 48% compared to the prior year, marking the 11th consecutive quarter in which the company posted top-line growth of 30% or greater.

As a caveat, Unity is not profitable on a GAAP basis, and the company generated negative free cash flow of $120 million over the last 12 months. Investors should keep an eye on these metrics -- but I'm not too concerned. Unity competes in a quickly growing industry, and it makes sense to spend aggressively to capture market share. And that's exactly what management is doing.

Here's the big picture: Interactive, real-time 3D content has become an important tool across numerous industries, and Unity is capitalizing on that trend. If the company can maintain its 30%-plus growth rate over the next five years, Unity's share price could easily triple by 2026 without any change in its price-to-sales ratio. That's why you should consider adding this tech stock to your portfolio.