The market didn't like what it saw, but did it overreact?

REV Group (REVG -3.29%), a manufacturer of buses, fire trucks, and high-end recreational vehicles (RVs), saw its stock price drive off a cliff after it announced its third quarter (Q3) 2021 earnings results on Wednesday, Sept. 9. Though its stock price recovered a little ground the following day, the approximate 16.3% plunge shows traders and investors weren't pleased despite an earnings per share (EPS) beat. Here are three reasons the market turned negative on the company.

REV Group managed to eke out some revenue gains year over year, with Q3 net sales increasing 1.9% to $593.3 million. This missed the consensus estimate of approximately $663.4 million predicted by Wall Street analysts, however, delivering a 10.6% negative surprise. 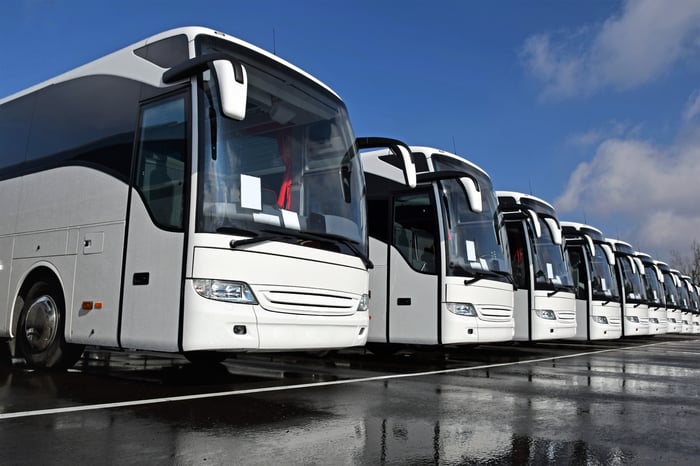 According to CFO Mark Skonieczny during REV's Q3 earnings conference call, fire and emergency was hit hardest by supply issues. He went on to say the company has "limited availability of chassis, axles and other components critical for completions and starts." In fact, according to him, at the end of Q3 REV Group "had over 100 vehicles that did not have all of the parts required to be completed."

REV Group's updated full-year guidance cut predictions for most metrics, including lowering its revenue forecast from $2.45 billion-$2.6 billion to $2.3 billion-$2.45 billion. Net income, adjusted net income, and adjusted earnings before interest, taxes, depreciation, and amortization (EBITDA) were all reduced somewhat. Only free cash flow got a boost, from the previous $65 million to $88 million to an updated $90 million to $100 million range.

3. General problems with supply and labor

While the impact of supply chain problems was most visible in the fire and emergency sector, these difficulties cut down on the other segments' performance, too. Sales growth in RV and commercial would likely have been higher than their actual gains with better supply. Skonieczny pointed out during the earnings call, "Collins school bus business suspended production during the month of August due to lack of chassis supply." The company is also having some labor problems, further slowing down vehicle manufacturing. Its Q3 earnings presentation notes "Covid [sic] related absenteeism" as "a near-term headwind to throughput." Counterbalancing this, CEO Rod Rushing mentioned "we're still seeing labor efficiency improvements" having some positive effect on margins.

But is the market right?

While traders and investors were reacting to real difficulties facing REV Group, there is another side to the story, backed by at least some more upbeat data. At the bottom line, the company lifted its net income from a $3.6 million net loss in Q3 2020 to a positive $23.7 million in 2021. Adjusted EBITDA nearly doubled year over year, and $0.37 adjusted EPS delivered an 8.8% positive surprise above Wall Street consensus.

Like other heavy equipment manufacturers such as Alamo Group, REV Group also has a solid backlog of orders. During the Q3 conference call, Rushing stated he wanted to make it "clear though that these are delayed deliveries due to timing of materials, components and chassis, but they are not lost sales." The shortages are suppressing production but not orders. An additional $65 million in revenue would have been added to REV Group's Q3 revenue without the delays. If REV had been able to manufacture all these vehicles on schedule, revenue would have risen approximately 13% year over year, not 1.9%, and been in the neighborhood of $658 million.

Orders are also continuing to come in strongly, stacking up a $2.7 billion backlog by fiscal Q3's end, an all-time record according to the company. $1.2 billion of the backlog is in the company's key fire and emergency vehicle segment. Compared to last year, Q3 orders for fire trucks surged 78%, while ambulance orders skyrocketed 88%. Bus orders were largely flat, but orders for RVs exploded 253% year over year, accounting for another $1.1 billion in backlog.

While order cancellations may occur, REV Group will likely deliver the majority of these vehicles once parts supply improves. Such a huge influx of cash will have a positive, bullish effect on REV Group. The company is also counting on some additional profits from the $1 trillion bipartisan infrastructure bill and $3.5 trillion budget reconciliation. Rushing said this pair of bills "will provide additional funding to municipalities to improve their municipal transportation and first responder assets," remarking he expects they will add "incremental opportunity to the level of demand we are experiencing today."

REV Group's current problems, in short, appear to be a delay in strong growth caused by temporary circumstances, not a long-term decline in business performance. Fools investing in industrial stocks may want to take a cautiously bullish view of the company, and watch for temporary market downturns as potential buying opportunities.