If higher prices are transitory, there should be a big downward price move, not just a return to mild gains.

The stock market had a tough day on Tuesday, and none of the major market benchmarks managed to survive the carnage. On a percentage basis, the Nasdaq Composite (^IXIC) and S&P 500 (^GSPC -0.03%) had smaller losses than the Dow Jones Industrial Average (^DJI 0.45%), but small-cap stocks reacted even more negatively.

One key number the market has been looking forward to is August's reading on consumer prices. After several months of high inflation numbers, economists were hopeful that the latest data would present a more benign picture. Yet even a lower-than-expected reading on the Consumer Price Index wasn't enough to calm nerves among investors. 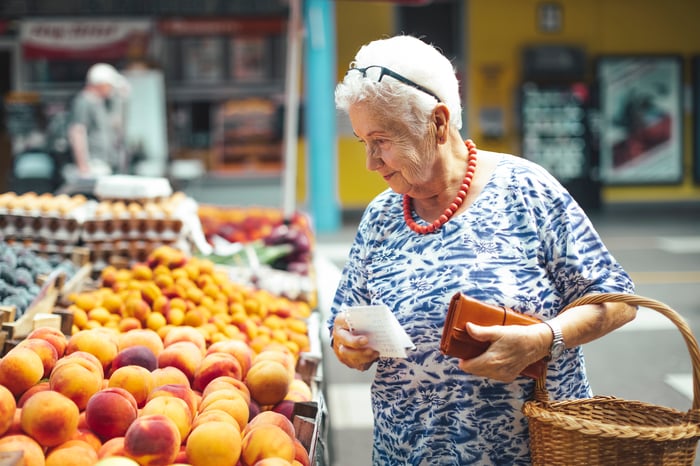 What the CPI report said

The headline numbers for August's CPI showed signs of calming down from their big increases lately. The  full CPI rose 0.3% in August, down from a 0.5% rise in July and below the 0.4% projection that economists had made. Core CPI, which includes volatile food and energy prices, behaved even better, rising just 0.1% for the month.

However, the year-over-year figures were still troubling. The CPI has risen 5.3% over the past 12 months. The core CPI is up 4% from where it was this time last year, and while both numbers are lower than they were last month, they're still well above the targeted 2% inflation rate that the Federal Reserve has historically used as a long-term target.

Looking more closely at the data, some of the areas that have seen the largest price increases in recent months did show some signs of reversing course. Prices for used cars and trucks were down 1.5% during the month, while transportation services like airfare and car rental prices were down 2.3%.

Some other areas, though, still showed price pressures. Gasoline prices were up another 2.8%, marking the third straight month of increases of more than 2%. New vehicle prices kept up their steady rise, climbing 1.2% during the month.

Just how transitory will inflation be?

In defending its monetary policy and keeping the Federal Funds rate  in a target range of 0% to 0.25%, the Federal Reserve has argued vociferously that inflationary pressures appear to be transitory. The central bank blames factors like supply chain disruptions and extremely large demand for certain goods and services as creating a short-term imbalance that should work itself out in time.

The question investors have to ask, though, is just how much time it will take for those factors to work themselves out. If price increases were truly transitory, we shouldn't just see a return to the monthly 0.2% and 0.3% CPI gains that we've seen regularly in recent years. Rather, we should get a month or two of steep price declines in order to make up for the unsustainably high year-over-year inflation rates that we've seen throughout much of 2021.

Nevertheless, it was clear from the financial markets on Tuesday that investors have no expectations that the Fed will change its course. Treasury bond yields moved lower, reflecting the fact that even slightly tamer inflation numbers will give central bankers the justification they need to keep interest rates low just a little bit longer.

Ordinarily, low rates would be good news for the stock market. The fact that stocks overall declined on Tuesday is a troubling sign that reflects a potential loss of confidence in U.S. monetary policy. Investors should keep their eyes on prices for the rest of the year in hopes of seeing a true pullback in inflation.

What Warren Buffett Can Teach Us About Handling Bear Markets