Uranium stocks took off yet again on Wednesday, with some stocks rallying to dizzying heights during the day. Here's how the top performers closed Sept. 15:

One move from Uranium Royalty and a big analyst upgrade on Cameco (CCJ -2.30%) shares sent stocks across the board surging.

On Sept. 15, Uranium Royalty announced it had entered into three contracts to purchase 300,000 pounds of key uranium compound in the spot market at an average price of $38.17 per pound for cash, with deliveries expected in September-October. Uranium spot price was hovering around $45 per pound on Sept. 14.

Why is that good news for the uranium market then, you may ask, if Uranium Royalty will buy uranium at prices substantially below spot price?

Well, the dynamics of the uranium industry is such right now that any purchase is expected to strengthen the market and support uranium prices. More importantly, there's a much, much bigger buyer that's loading up more and more uranium with each passing day: The world's largest physical uranium exchange-traded fund, the Sprott Physical Uranium Trust Fund (SRUU.F 1.22%). 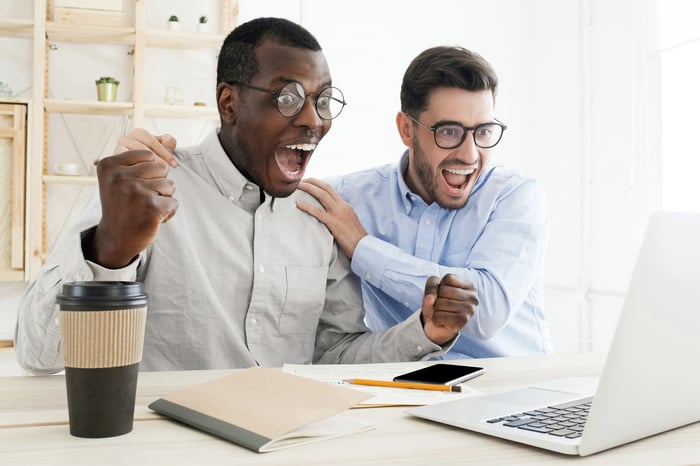 By now, investors in uranium stocks are probably already aware of the story unfolding so far: Aggressive spot uranium purchases by the Sprott uranium fund since mid-July is largely why uranium prices have gained an astounding 49% in just the past five weeks.

Bulls in uranium stocks found yet another reason to cheer on Sept. 15 when TD Securities upped its price target on the largest uranium stock in the U.S., Cameco, to $35 a share from $25 per share. Cameco shares closed Wednesday up 1.7% at a price of $24.7 apiece.

Sprott is unlikely to stop buying uranium anytime soon, regardless of what critics say.

The thing is, Sprott uranium fund uses proceeds from unit sales to buy uranium and was initially set up to sell units worth $300 million. Heavy investor interest meant the fund had already issued units worth $244.7 million by Sept. 10, compelling the fund to file for a new offering of units worth a whopping $1 billion.

Once the fund gets approval to issue new units, it'll buy even more uranium from the market and continue to support uranium prices. It's a cherry on top if companies like Uranium Royalty pitch in to buy uranium in between.

Uranium Royalty also revealed global demand for uranium has now exceeded levels prior to the Fukushima Daiichi nuclear disaster in 2011 that shut the doors on the nuclear industry and, therefore, the uranium industry (uranium is a key fuel for nuclear reactors). Uranium Royalty believes the "global mega-trend toward de-carbonization is providing a major catalyst for carbon-free, safe, and reliable nuclear energy." It's a widespread sentiment in the uranium markets right now, and one that'll largely decide the future for uranium stocks.