This food-delivery company benefited at the pandemic's onset and is sustaining the momentum.

DoorDash (DASH -0.98%) stock has been on fire lately. It's up 32% in the last three months and 50% overall for 2021. The company is quashing investor concerns about its prospects as economies reopen and people return to dining in restaurants.

Moreover, DoorDash is signing a flurry of partnerships, bringing aboard an increasing selection of items to its marketplace. Let's look at the recent success of DoorDash in more detail. 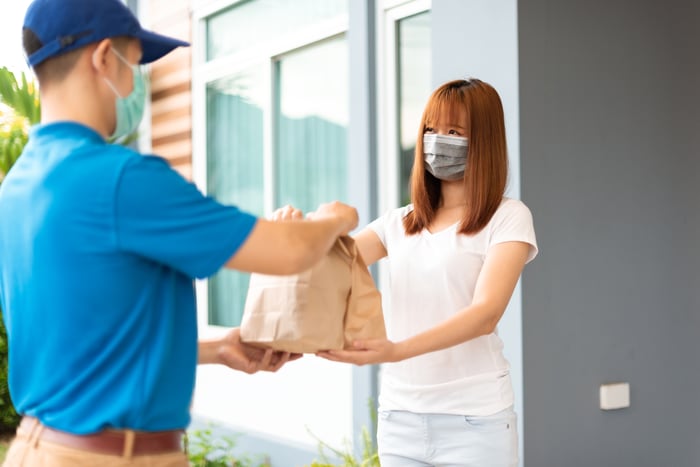 In its fiscal second quarter of 2020, DoorDash saw revenue more than triple from the same quarter a year before. The surge resulted from consumers forgoing dining at restaurants out of caution and government-mandated restrictions on in-person dining. The COVID-19 vaccine rollout that began earlier this year gradually allowed guests the option of dining inside at restaurants again. Investors were impressed when DoorDash reported revenue that grew by 83% in this year's second quarter, despite the tripling from last year and the economic reopening.

Management believes adding selection to its marketplace is key to generating order value and attracting customers. Order value is a crucial metric for DoorDash because the company earns revenue by charging a percentage of the order value to each merchant and consumer in a transaction. In that regard, DoorDash made progress by adding 5,000 new convenience stores, bringing on Albertsons as a grocery partner and PetSmart as another valuable merchant partner.

Interestingly, as economies are reopening worldwide, businesses are finding it difficult to attract employees. Except for a few significant employers raising wages by a couple of dollars per hour, worker pay is roughly the same while on-the-job risks have increased. It's no surprise then that fewer workers are willing to work at the prevailing wages. That isn't the case for DoorDash. The company added a record number of Dashers in its most recent quarter.

The company now boasts a fleet of 3 million Dashers, delivering products by bike or car. Employees of DoorDash get the freedom to choose their schedule, the convenience of working without supervision, and overall pleasant working conditions. These features should continue to benefit DoorDash in the near term and long term as the competition for workers increases.

Is it too late to buy DoorDash stock?

DoorDash's business growth looks unstoppable right now, but the success seems priced into the company's stock. DoorDash is trading at a forward price-to-sales ratio of 15.2, the highest in its short history as a public company. From that perspective, DoorDash appears expensive. 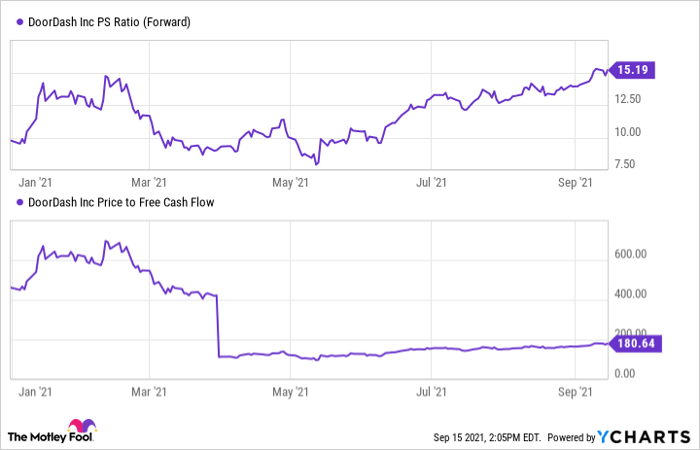 However, if you analyze DoorDash using the price-to-free cash flow multiple, it trades at 180. The stock was selling for a cash flow multiple of over 600 earlier in the year, so it looks like a relative bargain from this perspective.

Further, DoorDash is still in the beginning stages of a long growth story. The company is not yet profitable on the bottom line and invests heavily in growth initiatives. Though it may be on the expensive side, it's certainly not too late to invest in DoorDash stock.

DoorDash Is Buying Its Stock: Should Investors Buy Too?
366%