Ocugen shares soared more than 700% early in the year. They've since lost half of the gain.

Ocugen (OCGN -3.57%) shares were flying high earlier this year. The company signed a deal with India's Bharat Biotech for co-commercialization rights to its coronavirus vaccine candidate in the U.S. The Bharat product was close to market. And data were looking good. Since then, Ocugen learned it wouldn't win the right to sell the vaccine in the U.S. as soon as it had hoped. And the shares suffered.

In recent days, however, Ocugen stock has made a bit of a comeback. The stock even gained as much as 15% in one trading session on a particular bit of news. Now the question is whether this news could lead to a permanent turnaround for Ocugen's shares. Let's take a closer look. 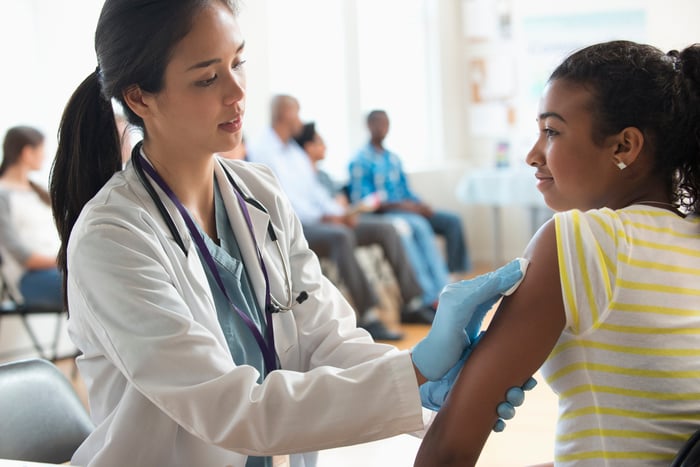 New to the vaccine business

First, some background on the Ocugen story. The biotech company is new to the vaccine business. Its core program is gene therapy for eye diseases. Ocugen has three programs in the pipeline, all in the preclinical stage. I like the idea of investing in a near-to-market candidate to generate revenue to fund pipeline development. The problem is, this particular investment looked risky from the start.

Ocugen finalized its deal with Bharat early this year. At that time, vaccine makers Pfizer and Moderna were already on their way to owning the U.S. market. Vaccine rollout had only begun weeks earlier -- and the U.S. increased its order of Pfizer and Moderna doses. In fact, it bought enough doses to vaccinate all Americans.

Why is this a problem for Ocugen? Because Ocugen's deal involved the co-commercialization of Bharat's Covaxin only in the U.S. And clearly, it would be rough for the company to sell a great deal of doses when the U.S. already had plenty.

Advice from the FDA

To make matters worse, in June, the U.S. Food and Drug Administration (FDA) advised Ocugen to aim for a traditional regulatory submission instead of Emergency Use Authorization (EUA). This adds considerably to the timeline. For instance, Pfizer and Moderna won EUAs in about three weeks. Traditional review takes from six to 10 months. And Ocugen mentioned it may have to conduct a new clinical trial. Bharat recently completed its final analysis from a phase 3 Covaxin trial in India.

I didn't expect Ocugen to gain much from the U.S. market in the near term due to the Pfizer and Moderna dominance. But this news completely eliminated near-term possibilities -- and weighed on investor sentiment.

Luckily, in June, Ocugen and Bharat expanded their deal to include Canada. This is positive. Canada initially struggled with vaccine supply. That may make the country more willing to purchase extra doses just in case.

But here's why the Canada news doesn't make me overly optimistic. Canada has already invested quite a bit in purchasing vaccines. In fact, it's committed more than $9 billion -- and has ordered a total of more than 400 million doses from eight different vaccine makers. Now, here's my concern. Canada's population totals 38 million. That compares to about 330 million for the U.S. The fact that Canada is ordering from many players means smaller orders for each. I'm not convinced Ocugen will generate significant revenue in the Canadian market.

Now, on to the latest news... Bharat asked the World Health Organization (WHO) to add Covaxin to its Emergency Use Listing. WHO's vaccine advisory group will consider the request during an Oct. 5 meeting, according to press reports this past week.

WHO authorization is a positive step for companies. It eases the rollout of a vaccine worldwide. But it doesn't give companies the authorization to actually sell their products in individual countries. And a WHO emergency listing isn't likely to pressure a regulatory body -- such as the FDA -- to speed up its review process of a particular candidate.

So, is this a non-event for Ocugen? Pretty much. It won't change the fact that a regulatory decision in the U.S. is going to take a while -- and possible commercialization in Canada may not be a massive generator of revenue.

That said, a nod from the WHO may offer Ocugen shares a boost. Does this mean you should buy the stock now? Not if you're a long-term investor. The coronavirus vaccine space is competitive. Pfizer and Moderna are leaders. Johnson & Johnson also has a product on the market. And Novavax aims to complete its EUA submission in the fourth quarter. At the same time, these companies are already working on vaccine updates or next-generation candidates. In this environment, a latecomer like Ocugen may struggle to gain even a small part of the market.

So, even if positive WHO news lifts Ocugen shares, I'm not ready to buy them. I'm still just as concerned about the long-term outlook as I was a few months ago.