Twilio (NYSE:TWLO) has been one of the best-performing tech IPOs of the past five years. The cloud services company went public at $15 per share in June 2016, and the stock opened at $23.99 on its first trading day.

Twilio currently trades at nearly $340 per share, so a modest $1,000 investment in its IPO would be worth more than $22,000 today. Let's see why Twilio generated such massive multibagger gains, and whether or not this high-flying stock could still have more room to soar.

A first-mover's advantage in a high-growth niche

Twilio was founded in 2008, just a year after Apple launched its first iPhone. Its cloud-based platform greatly simplified the development of communication features within mobile apps. 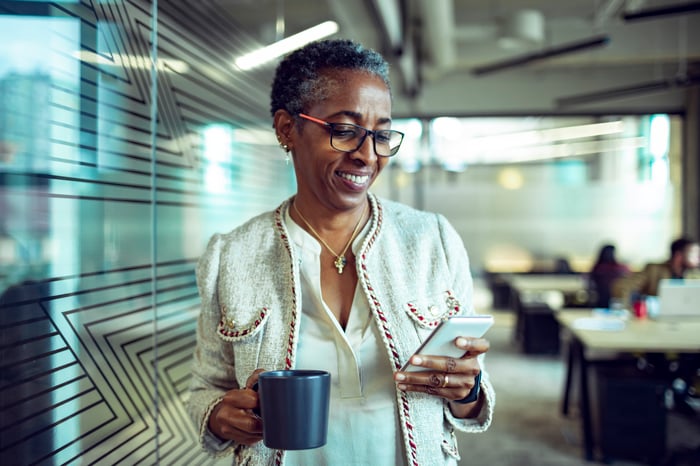 In the early days, it was difficult to integrate communication features like calls and SMS messages directly into mobile apps. Developers needed to build those features from scratch, and the entire process was buggy, costly, time-consuming, and difficult to scale as an app gained more users.

Twilio addressed this problem by processing calls, SMS messages, videos, and other content with its cloud-based service. Developers could simply add a few lines of code and outsource those features to Twilio, which charges usage-based fees to do the heavy lifting. Letting Twilio handle those tasks within its cloud service enabled developers to focus on improving their apps' core features.

Most smartphone users likely use Twilio's services without realizing it. It connects drivers to passengers on Lyft, enables guests to contact their hosts on Airbnb, and verifies users' identities for Stripe's digital payments. It currently hosts over 240,000 active customer accounts, compared to just 28,000 at the time of its IPO.

Twilio faces similar competitors like MessageBird, Bandwidth (NASDAQ:BAND), and Vonage's (NASDAQ:VG) Nexmo. But Twilio enjoys a first-mover's advantage against those rivals, and it's repeatedly acquired smaller industry peers like BeepSend, SendGrid, Segment, and Zipwhip to boost its revenue, expand its ecosystem, and widen its moat.

It's generating monstrous growth from the mobile market

Today Twilio trades at 22 times this year's sales. The stock's forward price-to-sales ratio has more than doubled since its closing price on the first day, but its stock has risen nearly 12 times. Therefore, investors who worried too much about its higher valuations missed out on some massive gains.

However, Bandwidth and Vonage trade at five and three times this year's sales, respectively. Neither company is growing as rapidly as Twilio, but both communications service companies should still generate double-digit sales growth this year.

Twilio's revenue growth is gradually decelerating due to the saturation of the smartphone and mobile apps market. As a result, it will rely more heavily on acquisitions for future growth.

That's a bit worrisome, since Twilio's GAAP losses are widening and its use of secondary offerings to raise cash and stock-based compensation to limit its cash burn are consistently boosting its share count. 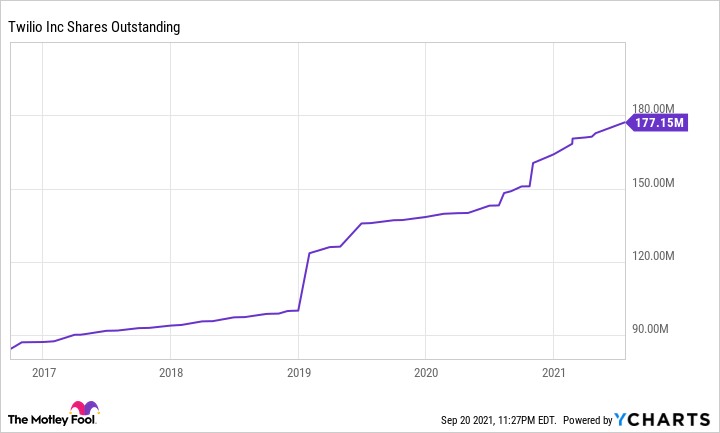 Twilio's gross margins are also  being squeezed by new A2P (application to person) fees from U.S. carriers, which are charged whenever a mobile app accesses a carrier's SMS services.

On the bright side, Twilio's dollar-based net expansion rate (which gauges its revenue growth per existing customer) has remained comfortably above 130% in the first half of 2021, which indicates its ecosystem remains sticky and its clients are ramping up their usage of its services.

Over the next five years, Twilio will likely expand its ecosystem to become a more diversified cloud communications company. One of the public cloud giants might also try to acquire the $60 billion company to tether more mobile apps to their cloud infrastructure platforms.

Twilio is still an innovative company with outstanding growth, a sticky platform, and a loyal customer base. But I doubt it will replicate its post-IPO gains over the next five years, especially as its revenue growth decelerates, its margins contract, its losses widen, and its share count rises. Twilio still has room to grow, but investors should recognize its weaknesses before chasing its five-year rally.