This company is in a giant industry that is poised to grow for years to come.

2021 has been a tough year so far for Activision Blizzard (ATVI -0.29%), the largest gaming publisher in North America, known for its Call of Duty franchise. Shares are down around 15% year to date, while the large-cap S&P 500 index is up almost 20%. Concerns over a slowdown in video game playing with the ending of COVID-19 restrictions plus a sexual assault scandal have investors concerned about the company's prospects.

While these concerns have some merit, Activision Blizzard has been a strong-performing stock over the long term, trouncing the total returns of the SPDR S&P 500 ETF (NYSEMKT: SPY) over the last few decades. With the stock taking a tumble this year, now is a great opportunity for investors to get in on this incredible stock. 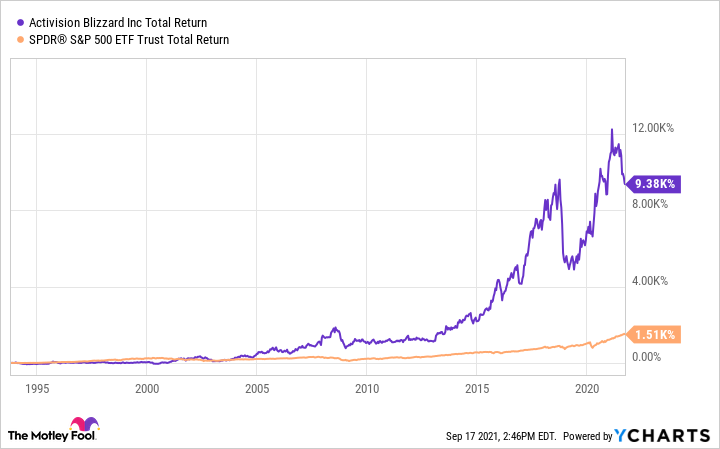 Expanding the Call of Duty universe

Activision Blizzard publishes numerous games, but the most successful is Call of Duty. The studio that publishes it, Activision, brought in around 55% of the consolidated company's operating income in 2020. Over the past few years, management has worked to expand the Call of Duty franchise outside of the traditional premium title that it sells annually. 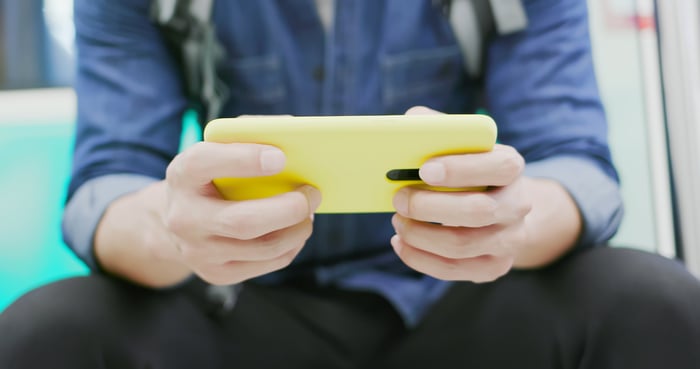 It launched the free-to-play game called Call of Duty: Warzone, which offers online battle royale-style matches. Call of Duty: Mobile was launched in October of 2019 and is on pace to do $1 billion in consumer spending this year.

These two recurring games, coupled with the annual release of the premium title, propelled the Call of Duty franchise into the stratosphere over the past two years. In the second quarter, hours played with the franchise were higher than all of 2019, while in-game net bookings were at four times the levels seen in the second quarter of 2019. With these new ways to play only releasing within the last two years, investors should expect this strong growth to continue over the next few years.

Lastly, Activision has been consistently investing in its esports league, the Call of Duty League. This won't be a huge moneymaker for Activision Blizzard, which will likely do $10 billion in annual revenue within the next few years, but can be a great way to drive engagement and lock in fans/players for the long term. The league, which already has millions of followers across the different streaming platforms, will drive more people to Call of Duty's moneymakers like Warzone, the annual premium title, and Call of Duty: Mobile.

Replicating the strategy for other franchises

Activision Blizzard has executed brilliantly with Call of Duty since 2019. Now, it wants to replicate that strategy with a lot of its other franchises under the Blizzard studio. This starts with Diablo, a franchise that last released a game in 2017. Diablo 4 (unnamed right now) is set to launch within the next 18 months, which Blizzard hopes will drive engagement for multiple years with recurring in-game content, similar to how Warzone operates.

The studio is also coming out with a mobile title called Diablo: Immortal in the first half of 2022. This won't happen overnight, but if Blizzard is successful in replicating the Call of Duty model, Diablo can be a consistent growth driver for Activision Blizzard over the next five years. Investors should expect similar strategies from the popular World of Warcraft and Overwatch franchises as well.

One reason Activision Blizzard has been able to execute so well with mobile is that in 2015 it bought one of the most successful mobile studios, King, for $5.9 billion. King makes the famous Candy Crush game, which is consistently one of the top five highest-grossing titles within the smartphone gaming charts.

In just Q2 of this year, King did $248 million in operating income for the company, with revenue increasing 15% year over year. Its mobile advertising business more than doubled last quarter and did $300 million in revenue over the last 12 months. King's developers also likely helped a ton with bringing Call of Duty to mobile. With a purchase price under $6 billion, the King acquisition looks like a home run for Activision Blizzard so far.

$9 billion in cash and a cheap valuation

Speaking of acquisitions, Activision Blizzard is currently sitting on a war chest of $9 billion. With between $2 billion and $3 billion in cash flow coming this year and only $3.6 billion in debt, none of which is due until 2026, management can get really creative with how it is going to spend this huge cash pile.

It is already choosing to reinvest in development, with plans to hire 2,000 developers over the next two years. It could buy another studio like Zynga (NASDAQ: ZNGA), which is the perfect size for Activision Blizzard with a market cap of $9 billion. However, the best move for the company is probably to return cash to shareholders through share repurchases. It has a $4 billion authorization outstanding, and with a market cap of $60 billion, it could reduce its share count by over 5% while still leaving a strong cash cushion if management sees any new investment opportunities.

With over $2.5 billion in cash flow from operations over the last 12 months that should grow substantially over the next two to three years, amping up the buyback program would be a smart move from Activision Blizzard right now. If it starts buying back shares, that is another reason why now is a great time to buy this millionaire-maker stock.