Bad news from a couple of companies are moving share price after hours.

The stock market tried to mount a comeback on Tuesday, but the effort largely ran out of gas by the end of the regular trading session. The Nasdaq Composite (^IXIC) managed to hold onto at least modest gains. However, the Dow Jones Industrial Average (^DJI) and the S&P 500 (^GSPC 0.75%) both suffered intraday reversals that pointed to a lack of comfort with the current situation on Wall Street.

More bad news came after the market closed, as a couple of key players announced their latest earnings results. Many had been hoping that delivery giant FedEx (FDX -0.21%) and software specialist Adobe (ADBE 1.81%) would be able to turn in stronger performances that would point to an ongoing recovery in the global economy. However, the response from shareholders in after-hours trading suggested a different narrative that could send stocks still lower on Wednesday. Below, we'll take a closer look at the reports and how investors took them. 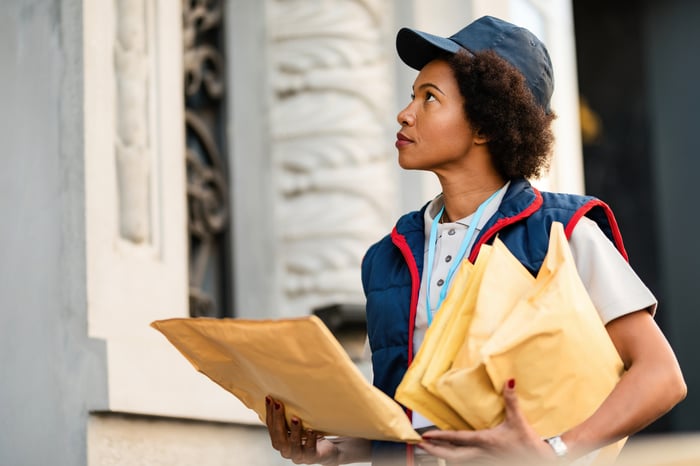 FedEx shares were down nearly 4% in after-hours trading Tuesday. The delivery company's fiscal first -quarter financial report showed some of the headwinds that many businesses are dealing with right now although there were also some encouraging signs of recovery.

FedEx's numbers were mixed. On the revenue side, FedEx's business bounced back, with sales rising about 14% from year-ago levels to $22 billion. However, the company's bottom line didn't hold up as well. Adjusted net income of $1.19 billion was down about $90 million year over year, and that led to adjusted earnings of $4.37 per share. Even though that was slightly better than the consensus forecast among those following the stock, investors seemed to be hoping for a much more substantial beat on the bottom line.

The company blamed the pressure on profits on a couple of factors. A constrained labor market cost FedEx an estimated $450 million in elevated costs, with higher wages and losses of productivity coming from network inefficiencies. Supply chain disruptions have also reduced the volume of parcels in the U.S., and offsetting gains in international express shipments haven't been enough to let FedEx catch up entirely. The express division also saw staffing challenges and pandemic-related disruptions. Although the ground business also suffered, the freight segment saw improving operational results, including record operating margin levels.

In response, FedEx will raise its rates at the beginning of 2022, with expected gains of 5.9% to 7.9%. Fuel surcharges will also get imposed starting in November. Even with those added revenue sources and various cost-cutting measures, though, FedEx chose not to offer an outlook for the full fiscal year, and that likely weighed on investors' comfort level with the delivery company's prospects.

Adobe's fiscal third-quarter numbers showed continued growth. Record revenue of $3.94 billion was up 22% year over year. Adjusted earnings of $3.11 per share were up 21% from year-ago levels. All of Adobe's key segments indicated solid gains, including a 21% rise from the creative revenue business, 23% gains in digital media, and 31% growth for the document cloud.

Adobe also has plenty of business ahead of it. Remaining performance obligations jumped 22% to $12.63 billion, representing more than three quarters' worth of sales. Adobe also indicated confidence in its stock, repurchasing 1.7 million shares during the period.

Yet even strong expectations for the fiscal fourth quarter weren't enough to make investors excited. Expected revenue of $4.07 billion and adjusted earnings of $3.18 per share would be better than initially projected.

It's possible that based on investor reaction to these reports, the stock market will take a hit on Wednesday. Yet many aspects of the reports were positive. That could bode well for the long-term prospects for these stocks.

Did This Single Stock Just Signal a Deep Recession?

These 2 Stocks Soared Even as Markets Stayed Skittish Tuesday