It sometimes pays to follow the portfolio decisions of prominent investors, like this one involving a burgeoning digital-payments business.

There's a new luminary on Wall Street, and her name is Cathie Wood. The rockstar stock picker's Ark Innovation ETF skyrocketed 149% in 2020, putting her firm on the map and making Wood widely followed among retail investors.

Ten stocks make up approximately half of the portfolio, which focuses on innovative companies harnessing disruptive technologies to attack large market opportunities. One of these holdings, Square (SQ 1.94%), appears particularly interesting right now.

Let's find out why this Cathie Wood stock looks unstoppable. 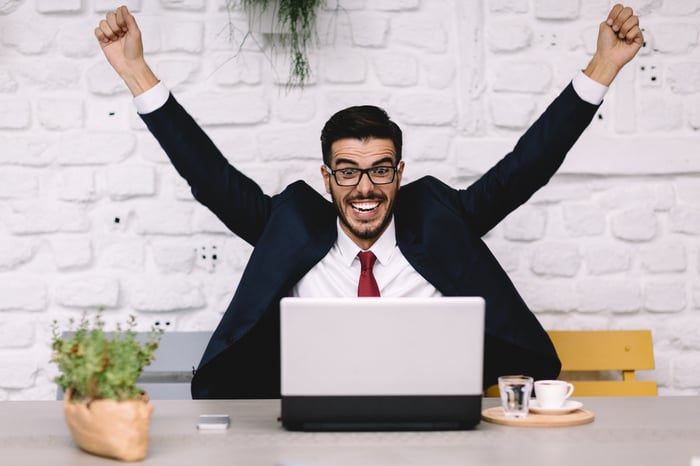 Square's stock price performance since its initial public offering (IPO) has been nothing short of spectacular, catapulting nearly 1,900% since November 2015. For anyone familiar with the company, this is hardly a surprise. Square possesses a plethora of competitive advantages that support its remarkable success.

For starters, the business benefits from intangible assets, namely its strong brand name and technological know-how in developing elegant products and services. The company's Net Promoter Score, which measures the likelihood that customers will recommend Square to others, hovers around 65. This is double the average of banking providers in general.

This scale has stemmed from Square building a powerful two-sided platform of consumers and merchants, which gives the company another edge coming from network effects. The Seller ecosystem, which consists of millions of small businesses that processed $38.5 billion in gross payment volume in the second quarter, and the Cash App, which has 40 million monthly active users, provide Square with a sticky and valuable user base that it can continue pushing new features to.

And that leads to the final competitive advantage: Switching costs. If a merchant starts accepting payments with Square, getting familiar with the software and hardware, they're going to be reluctant to change to another provider even if it's cheaper. Conversely, Cash App customers will hesitate to change personal banking providers once they've started using the service. Just think of the immediate headache you'd have if you had to change your bank.

Square clearly has every competitive strength imaginable, so it's no wonder the company has thrived and will continue to thrive. Cathie Wood recognizes these characteristics, and it's why her Ark Innovation ETF owns more than $800 million worth of the stock. 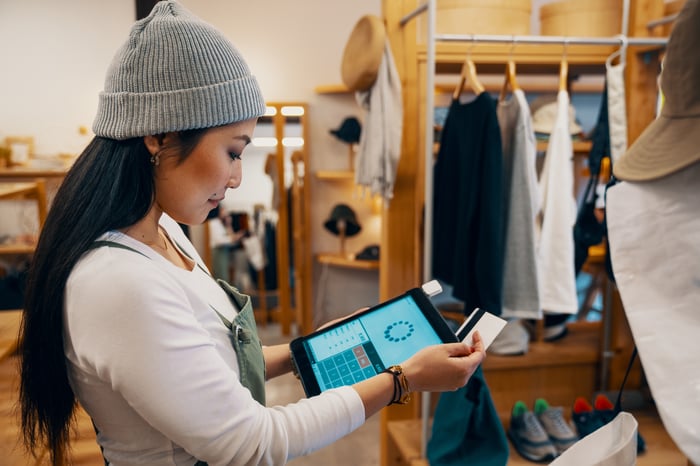 Obviously, what matters for investors is where the company and stock are headed going forward. In an investor presentation from December of last year, management highlighted a massive addressable market that Square is going after. The business sees a $100 billion revenue opportunity on the Seller side, and a $60 billion revenue opportunity on the consumer side. Square has barely scratched the surface so far.

Underpinning the growth strategy is a plan to release new products and services and to enter new markets. Square's sellers currently operate in the U.S., Canada, Japan, Australia, the U.K., and Ireland, while Cash App customers are only in the U.S., the U.K, and Ireland. There are many more countries the company can pursue in the future.

According to traditional valuation metrics, such as the forward price-to-earnings (129) or the forward price-to-sales (6) ratios, Square looks like a top-shelf stock today. There are certainly some serious growth expectations baked into the stock price, but based on my arguments above, Square should be able to execute and deliver on the hype.

Wall Street analysts are forecasting that earnings per share will balloon to $3.16 by 2023. Just last year, in 2020, this figure came in at $0.44. The stock is rated as a strong buy on the street, with an average price target of $314, implying better than 20% upside from today's prices.

Investors are full of optimism on this stock, and for good reason. This is a longtime market beater, and the years ahead still look very right. Follow Cathie Wood's move and consider adding Square to your portfolio.

Why Block, Affirm, and Upstart Holdings Were Plunging Today
363%