Please ensure Javascript is enabled for purposes of website accessibility
Log In Help Join The Motley Fool
Free Article Join Over 1 Million Premium Members And Get More In-Depth Stock Guidance and Research
By Neil Patel – Sep 22, 2021 at 10:45AM

Shareholders may not be getting the diversity and stability they originally expected.

It's common knowledge among the investing community that cryptocurrency prices are extremely volatile, and major price fluctuations on a day-to-day basis are normal. So, if you want safer portfolio exposure to this burgeoning asset class, what are you supposed to do?

One popular course of action is to invest in shares of public companies that offer products and services that serve the cryptocurrency market. Buying a stock like Coinbase (COIN -2.83%) might make a lot of sense at first, but it too has a serious flaw that you should keep in mind.

Let's break down what investors need to know. 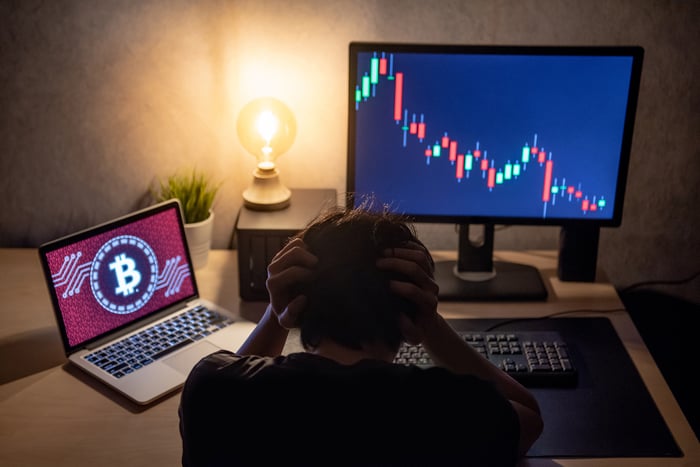 Following Bitcoin up and down

Since Coinbase had its initial public offering (IPO) on April 14 of this year, the stock has fallen 28% from the closing price on its first day of trading. The business seems to be thriving as revenue and net income in the second quarter grew astronomically higher than they were in the prior-year period. And the number of monthly transacting users now stands at 8.8 million, up from just 1.5 million in the second quarter of 2020.

Coinbase, which generates the majority of its revenue from trading fees, does well when cryptocurrency volatility is high. This has certainly been the case in 2021 as Bitcoin, the largest cryptocurrency by market capitalization, has been on a roller-coaster ride this year. But what stands out the most is just how closely Coinbase's stock price follows that of Bitcoin. In the time since Coinbase's IPO roughly five months ago, Bitcoin's price has declined about 25%, not much different than Coinbase's performance. A look at the chart below makes it quite apparent how these two assets track each other. 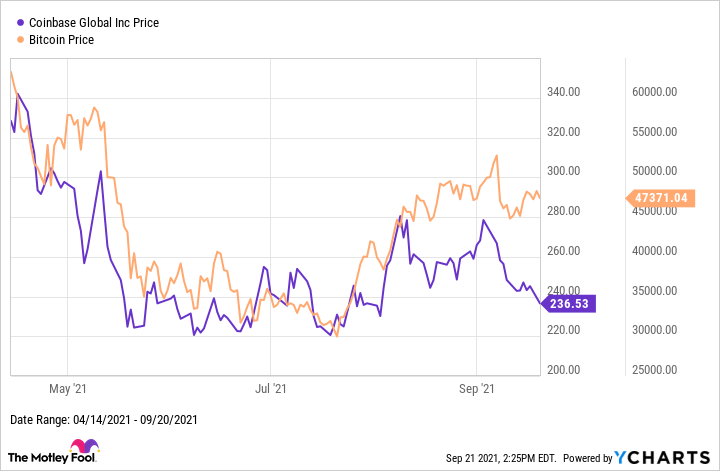 In an interview from April, Coinbase co-founder and CEO Brian Armstrong mentioned how owning shares of the company could be viewed as an "indexed bet on the crypto space more broadly." He also explained that his company isn't "tied to one crypto asset." Although Bitcoin accounted for just 24% of total trading volume for the business in the most recent quarter (down from 57% in the prior-year period), Armstrong's statement hasn't proven true so far during Coinbase's short public history.

The company currently offers 83 digital assets for trading and 142 for custody. Furthermore, an emphasis on boosting subscription and services revenue in the years ahead could disconnect Coinbase from the price of Bitcoin. This has not, however, been the case recently. And investors looking to put money to work in cryptocurrencies via the stock market should think twice before buying Coinbase shares.

Becoming a successful investor in general is challenging, and investing in a new and unfamiliar asset class is even harder. While it may seem like owning shares in Coinbase is a relatively safe bet to gain exposure to the cryptocurrency market, the stock has clearly been quite volatile in its own right. The business is growing its non-Bitcoin revenue, but based on their similar trajectories, the market still views the two assets in the same light.

It's important to not only understand the fundamentals of any particular company that you're interested in but also how the market perceives that business and stock. Coinbase is still heavily influenced by the rise and fall of Bitcoin. Keep this critical point in mind if you're considering Coinbase as an investment.

The Implosion of FTX Is Not Good News for Coinbase
360%