Construction is a complicated process. Imagine building a house -- there's a general contractor who communicates with plumbers, electricians, painters, and many individuals to make it happen. In fact, it takes an average of 22 subcontractors to build a house . Now extrapolate all the tasks to a massive project like the Las Vegas Raiders' Allegiant Stadium. It's easy to see how the massive number of contractors, engineers, and architects required on a project of that scale could lead to miscommunication, errors, and ultimately money wasted.

That's where Procore (NYSE:PCOR) steps in. Its platform allows all members of a project to access real-time updates and collaborate; making sure everyone on the construction project is on the same page. In an industry reliant on paper and manual processes, a digital revolution that has transformed the rest of the global economy is now beginning in construction.

Procore's software has specific functionality for project owners, general contractors, and subcontractors. Even if a stakeholder on the construction team doesn't use Procore, a user can invite them to a project on the platform where they can utilize the software . This gives potential Procore customers a free trial to see if they want to incorporate it into their future projects.

Judging by Procore's customer satisfaction ratings, they will likely convert many of the free users to paying ones. 97% of users rated it four or five stars out of five, 92% would recommend it, and 93% believe Procore is going in the right direction according to the G2 2021 Fall Report . Word of mouth advertising is critical for Procore, as verbal communication is, and likely always will be, prevalent in construction.

Procore still has a lot of room to capture customers. The company believes they have only captured 2% of all available construction industry logos . Additionally, the total addressable market (TAM) for construction management software is anywhere from $9.4 to $12.4 billion , depending on which way the company calculates it. Obviously, one company will not capture this entire market opportunity, but Procore is positioning itself to be the leader. As for existing customers, 43% subscribe to 4 or more of 13 products so expansion is also possible there. 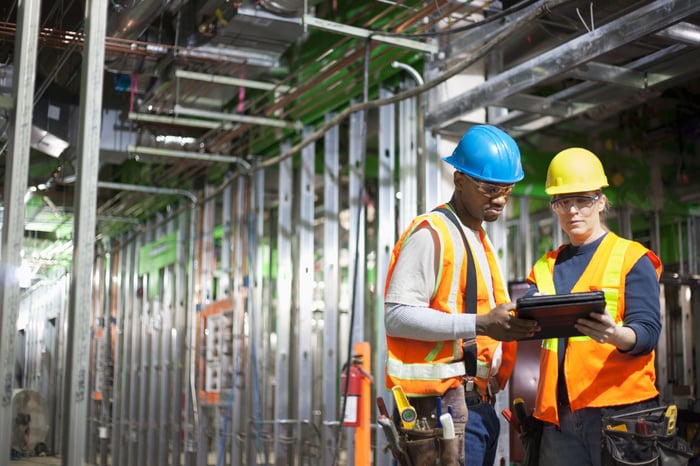 With one public quarter under Procore's belt, judging how the company executes over long time periods is difficult. Still, the company reported positive results for its second quarter with revenue growth of 27% and a GAAP gross margin of 79%. Typical of many newer companies, Procore isn't profitable and reported a net loss. This loss was made even worse due to all the expenses associated with going public. Free cash flow was negative $1.3 million, but with more than $1 billion dollars on the balance sheet, Procore doesn't need to worry about running out of money anytime soon.

One missing metric from their quarterly results was net retention rate. Almost all software as a service (SaaS) companies report a similar number which gives insight into how customers expand their spending. Procore included this metric in their IPO roadshow slides, however, it was missing from their second-quarter results . It was 117% in FY19 and 107% in FY20. Management did note in the earnings call that the retention rate was returning to pre-pandemic numbers, but didn't report the actual number. If management continues to not include this number, investors should be wary. When management pulls a metric, it typically means the benchmark is not being met.

As a SaaS company, Procore's valuation is best compared with others in that space. Additionally, Procore is in the growth phase, so the standard price-to-earnings ratio isn't useful.

Compared to other industry-specific SaaS companies, Procore's valuation looks reasonable. nCino (NASDAQ:NCNO) provides a platform bankers can use to streamline their business. Veeva Systems' (NYSE:VEEV) cloud serves the life sciences sector. Both of these companies focus on a specific industry, similar to Procore.

Although Procore doesn't have quite the growth rate as its peers, it still sits around the same valuation. It also has better gross margins, meaning Procore's product costs less to produce.

Procore has a compelling story and a massive opportunity. As investors gain insight into the business through successive earnings reports, it should prove a solid investment. Until then, I wouldn't go all-in on this company. It's worth adding as a small position to a long-term growth portfolio to keep an eye on. After Procore has reported several quarters worth of results, those with an appetite for risk can make it a larger portion of a well-diversified portfolio, provided Procore continues to execute.